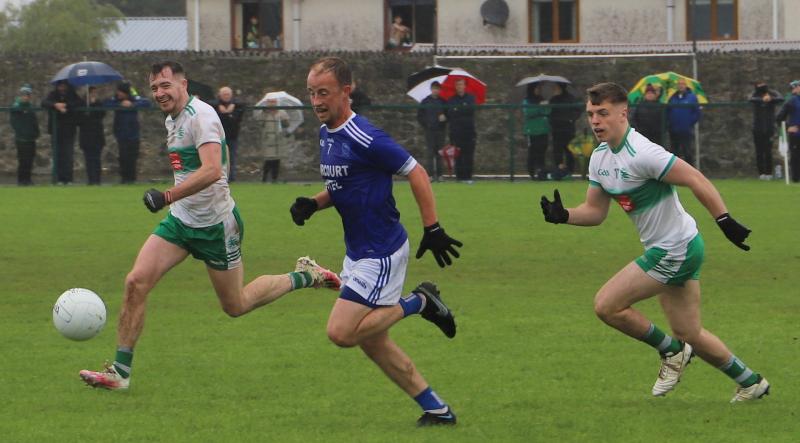 A magnificent second half display of grit and determination saw Aodh Ruadh produce the result of the championship so far drawing with Naomh Conaill in Pairc Aoidh Ruadh.

It didn't look good for the home side when Naomh Conaill led by nine points - 2-5 to 0-2 -after 22 minutes, but the Glenties men could add only two points in the remainder of the game.
The experience of Naomh Conaill was to the fore in the opening quarter as they made light of the difficult conditions of wind and rain.
Odhran Doherty hit a wonder point off his left from an impossible angle on two minutes and his brother Ultan Doherty came forward to add a second three minutes later.
It became even better for the visitors to Munday's Field as the third of the Doherty brothers went for a score but it dropped short to Charles McGuiness, who turned and fired to the net.
Aodh Ruadh got their first point from a forward mark from Oisin Rooney but Dermot Molloy cancelled that. Nathan Boyle lofted a second point for the home side but then Naomh Conaill struck for a second goal. Approach work from Leo McLoone and Eoin Waide was finished by Dermot Molloy.
Jeaic Mac Ceallabhui stretched the lead to nine before Aodh Ruadh finally found their feet. Nathan Boyle pointed and David Dolan had a goal effort blocked but it fell to Philip Patton to point.
David Dolan added a fifth point and after a long delivery Darren Drummond rounded his man to fire just over the bar with goal on his mind.
The goal they needed arrived a minute into first half added time when Michael McKenna found David Dolan bursting through and he fired to the net to leave it 1-6 to 2-5 at the break.
Shane McGrath was denied a mark by the referee at the start of the second half but Philip Patton fired over and Michael McKenna hit a marvellous leveller from distance.
Scores were becoming very difficult to get in the conditions. Charles McGuinness edged Naomh Conaill in front on 39 minutes but a late tackle allowed Philip Patton levelled matters from a free.
Just before the second half water break Ethan O'Donnell put Naomh Conaill ahead again but Patton, from a free, left it all square with seven minutes of normal time left.
Both sides had chances to win it with Carl O'Brien making a great stop from McGuinness while Aodh Ruadh had a chance in the final seconds but Mark McGlynn was crowded out.