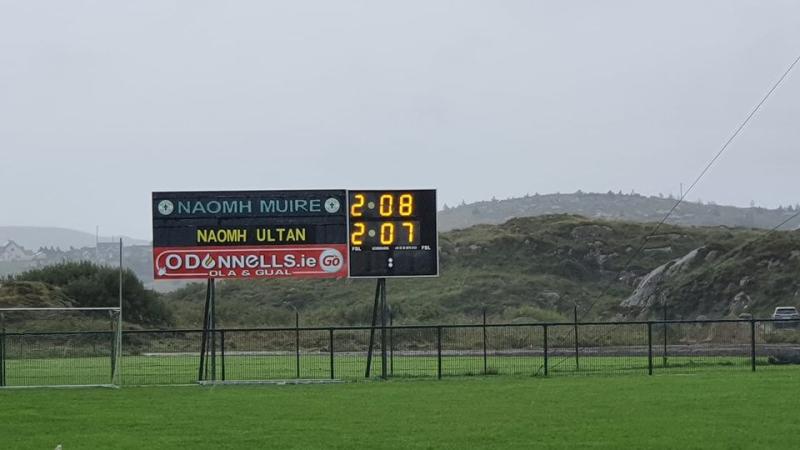 In a dramatic finish at the Banks on Sunday, Naomh Muire came from five down to edge victory over Naomh Ultan and almost certainly seal a spot in the Intermediate championship quarter-finals.

A penalty from Eoin Martin and three free kicks from goalkeeper Declan Ward, meant the home side got the win they needed.
Naomh Muire started well and two points from Eoin Martin gave them an early lead. However Cian Kennedy pulled one back and James Byrne was then taken down for a penalty. Alan Lyons scored the penalty.
Naomh Muire continued to push forward but they hit five wides in a row, and Naomh Ultan capitalised by hitting the next three scores from Lyons, Dermot Gallier and Darragh Murrin.
Joey Gillespie responded with a point for Naomh Muire. Then in injury time Cian Boyle got forward for Naomh Muire and fired low to back of the net, to bring them back into the game, but this was answered by a goal on the other side by the impressive Darragh Murrin.
Half-time: Naomh Muire 1-3, Naomh Ultan 2-4.
Patrick White got the first point of the second half for Naomh Ultan. Declan Ward and Joey Gillespie responded for Naomh Muire. Further points for Murrin and Kennedy put Naomh Ultan 2-07 to 1-05 going into the second half water break.
Then came the strong finish from Naomh Muire. Tuathal Lunny got on the end of a great move and was brought down in the penalty area. Martin despatched the penalty. Then goalkeeper Declan Ward came forward and scored the three free kicks. During this period Naomh Ultan had some goal chances but a save from Ward and a wide from Patrick White meant that Naomh Muire held on for a good victory.