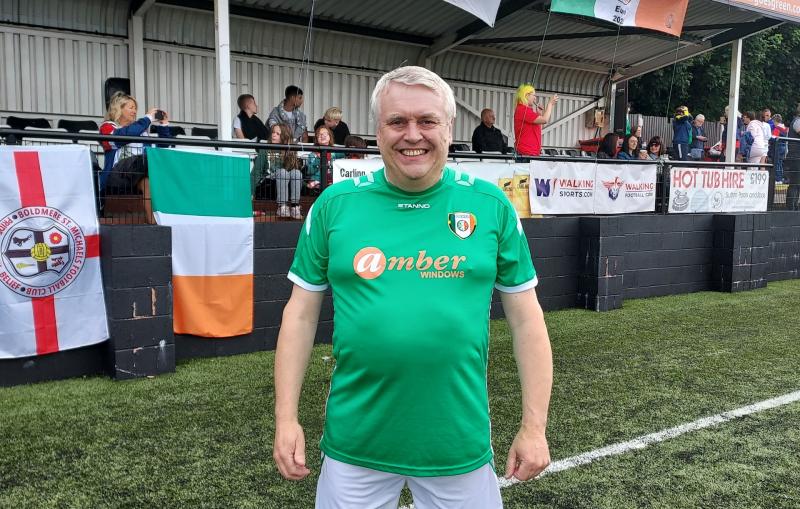 Getting selected to play for Ireland at any level brings with it a level of pride and for those who live outside the country, it seems to have an even greater sense of achievement.
That is the case of Seamus McGoldrick, who has recently been selected for the Republic of Ireland Walking Football team, a team game that, pardon the pun, is beginning to find its feet.
McGoldrick was born in Newport in South Wales; his father Willie McGoldrick from Cashelard, Ballyshannon and mum Mary Evans, from Cashel, Rossnowlagh, had left the south Donegal area in search of work in the 1950s.
Seamus was a very good young footballer and had a professional career up until a very bad leg break when he 28.
"The day I was having leg reset, the doctor said I would never play football again. It was three years before I got back on a pitch.
"I felt that if I was the same, but I wasn't," said Seamus, who said the break to his tibula meant that he had recurring problem with his calm and Achilles.
"I used to play football with Newport County and while I was there the great John Aldridge was there. He was in the first side and I was coming through with the U-18s and Reserves.
"I actually came to Ireland and I played twice for Sligo Rovers against a Sligo-Leitrim Select side, once was under Patsy McGowan and once under Paul Fielding.
"In those days there wasn't much money in football and a few years later I broke my leg.
"I coached in the Welsh League after doing my Welsh coaching badges and then I finished. I was 21 years retired and then this Walking Football came on the telly. And my girlfriend said, why don't you try that.
"So I went down to Newport County's Walking Football and I said 'ah no, I couldn't play that; they are too good'.
"It's all walking and Over-50, Over 60s and Over 70s. I went and I started training with them. That was three years ago. The year before Covid hit I won the Newport County Player of the Year."
There was more to follow as Ireland were looking to put an international team together.
"Then there was an advert that they were trying out for the Republic of Ireland walking footballers at Over 50s, Over 60s and Over 70s. So I went for the trial and got in.
"It has really taken off over here. Wales have a team and England have a team," said Seamus, who added that it has begun to take off in the Dublin area. 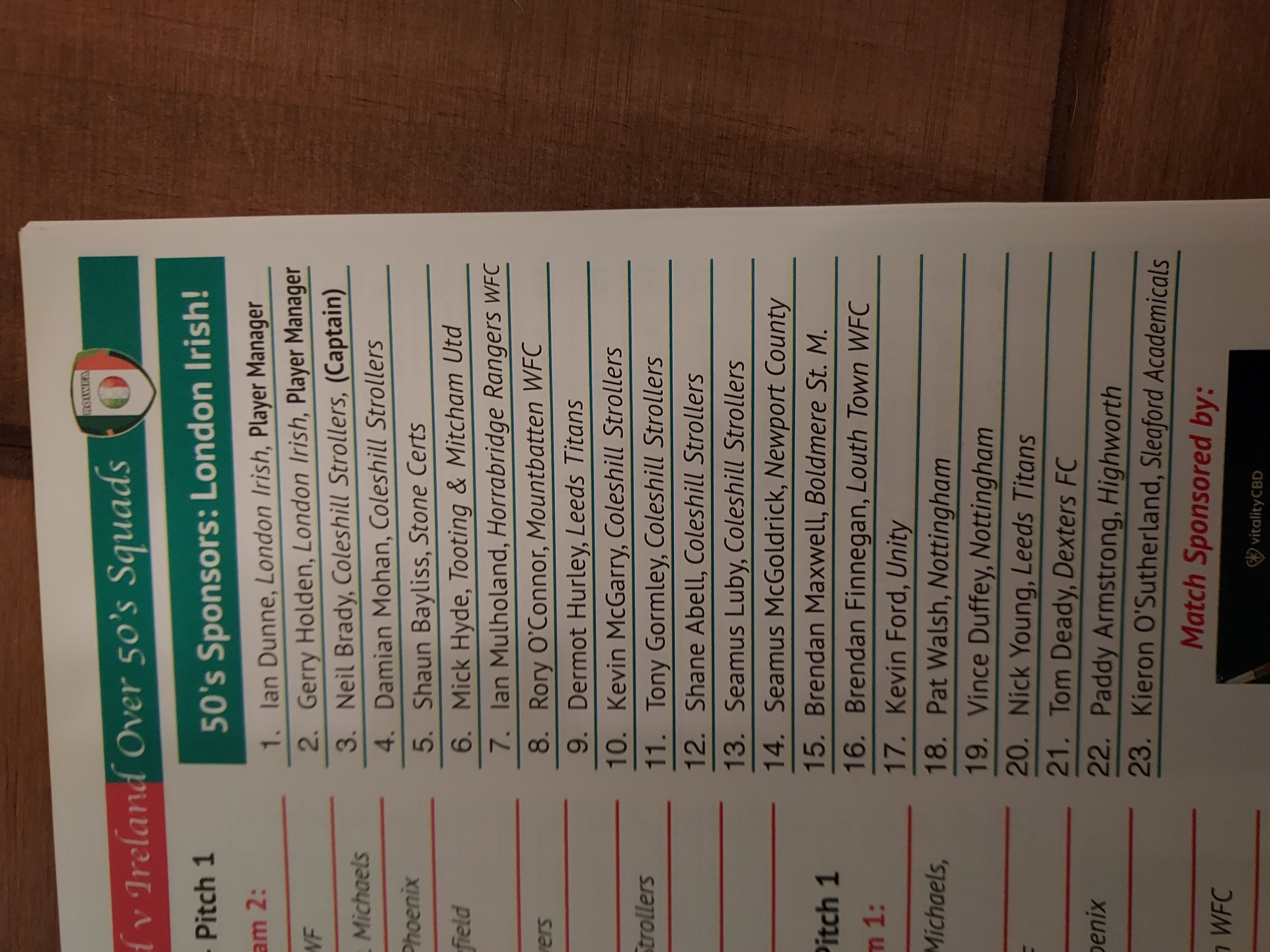 The Republic of Ireland panel for their August game against England

"The Irish-based players over here are hoping to bring England over next year to play in Dublin to promote the game," said Seamus, who said the majority of the Irish team are London based.
"We meet in Birmingham. We actually played England in Sutton Coldfield on August 15 and unfortunately we lost 2-1. But England have a very professional outfield, tracksuits with their names on, the manager in a suit. They are run out of St George's Park and are like a professional team.
"I go from Newport and I'm the only Welsh-based player," said Seamus, who was due to play England again last weekend in London, but injury ruled him out."
Seamus is the oldest of the McGoldrick clan at 58 and is uncle of well-known professional boxer, Sean.
"I'm closing in on 60 and my ambition is to make the Ireland Over-60s team.
"But my problem is that broken leg; it's an injury from 30 odd years ago. If I train I struggle."
But he has been bitten by the Walking Football bug.
"I just love it. To be honest, I was sat on the settee. I got a dog, then I started walking the dog and I got into it and I've shed over three stone. I got myself into shape as if I was going to play professionally again.
"I went proper diet and I prepared as if I was preparing for a match. Even when I play for Newport now, I prepare well. I do really, really enjoy it.
"Newport play in the Welsh League. There are different rules to normal football. It is normally six or eight-a-side. You can't go into the area, the pitch is about half the size of a normal pitch. Referees have blue cards, which means you will be sent off if you go running, even if you are running back to position, you can get a blue card and be sent off for two minutes.
"The only real rule change is for throw-ins; you can roll it in under arm or you can kick it in," said Seamus, who said because of his leg break he learned to read the game better and that helped him in his coaching days and also now at his new-found love of Walking Football.
McGoldrick plays in the centre of defence for Ireland but for Newport County he is employed as a creative player in midfield.
But his links to Ireland are really strong and he is back in home area whenever he can. "I've got a house in The Acres outside Ballyshannon and I'm over there any time I can get. I work as a school caretaker and any half-term I'm over there," says Seamus, who said that Covid had intervened, but he was hoping to be back often again as normality resumes.
There has always been a very strong connection between the Ballyshannon area with Newport as Seamus reveals: "My father and his brothers and many others left Ballyshannon to come to Newport to work on the steel works and the M4 motorway. You've got McGarrigles there, Dolans, McGonigles; they all came over and have made businesses around Newport, mostly Newport," says Seamus.
"A lot of them went back but unfortunately my dad never got back. He is buried in the Abbey and my mum passed away last year on 22 July and she is also buried in the Abbey."
There is another sporting connection to the McGoldrick family through present Sligo Rovers goalkeeper Ed McGinty. Seamus is a first cousin of Ed's father, and keeps a close eye on Ed's career at Sligo and with the Ireland U-21s. McGinty is presently living in Ballyshannon.
As for Walking Football, he would recommend it for anyone, especially the older generation. "Hospitals here have sent people with heart problems to use this new form of exercise," said Seamus, who said that even if he was not involved in the teams at Newport or Ireland, he would still go to the training sessions for his own personal fitness.
"It is perfect exercise for the older generation."
"Hopefully when Covid is sorted, I can see it taking off," he said. 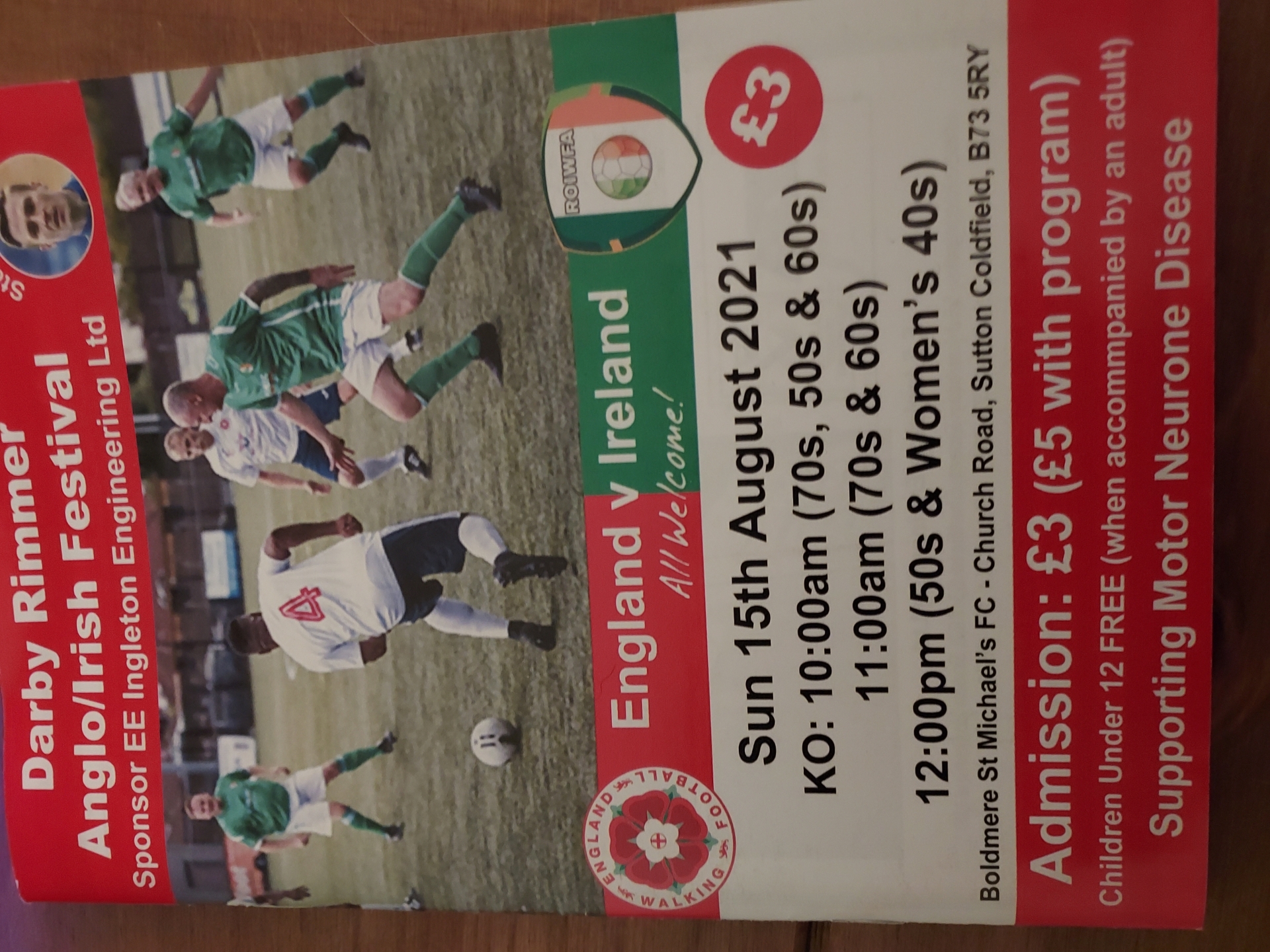 The programme cover for recent international