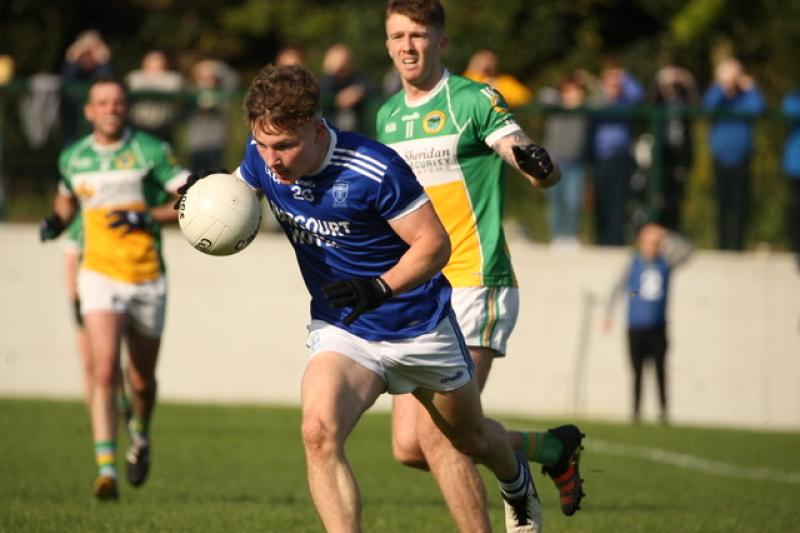 Odhrán Doherty of Naomh Conaill on the ball against Glenswilly. Photo Thomas Gallagher

Glenswilly’s attempts to reach only a second Donegal quarter-final since they last won the competition in 2016 fell short when they were beaten by Naomh Conaill.

Leo McLoone scored the only goal of the game at Pairc Naomh Columba a minute into the second half and when the tills were counted at the end of the day that proved to be the differential.

Martin Regan’s troops swarmed Glenswilly’s Caolan Kelly, who had made a fine interception but was quickly closed down. As he tried to break forward, his attempted hand pass was blocked by McLoone, who had a clear pathway to goal and he blasted the ball to the net to give his team a five-point lead.

When Kieran Gallagher added his third point from play a minute later to make it a six-point game, 0-8 to 1-11, the writing looked to be on the wall for Glenswilly. Naomh Conaill led by two at half-time, 0-10 to 0-8, after a keenly contested opening half where there was never more than two points between them.

Shane McDevitt and Michael Murphy got the home team off to a flying start with points in the first minute, but Ethan O’Donnell and John O’Malley soon had the visitors on level terms.

Murphy restored the Glenswilly lead but three in a row from Dermot Molloy, Odhran Doherty and Kieran Gallagher had Naomh Conaill ahead for the first time. Caoimhin Marley’s point left it 0-4 to 0-5 at the water break. Two Murphy frees and another from Gallagher at the other end in between those left it level again at 0-6 each.

Kevin McGettigan and Odhran Doherty’s second put the visitors two ahead but back came Glenswilly with top class scores from play, but Caolan Kelly and Murphy hit back and again it was level at 0-8 each.

Naomh Conaill had the final say of the first-half with points from McLoone and the excellent Keelin McGill to lead by two at the break. McLoone’s goal and Gallagher’s point at the start of the half made it a six-point gap but three quick points from Murphy, Mark McAteer and Shaun Wogan had Glenswilly back in it quickly, 0-11 to 1-11.

The home team kept pressing and could have been level in the 39th minute. A sweeping move from defence ended with Michael Murphy’s hand pass across the goalmouth to Shane McDevitt. Under pressure, he still got a good strike away, but it crashed off the crossbar; a big let-off for Naomh Conaill.

Murphy’s point left just two in it. Dermot Molloy and McGill added two and in between those McDevitt pointed. Shane McDaid came forward to make it a two-point game yet again, but two Charles McGuinness frees edged the away team four ahead.

Glenswilly threw everything they had at it in the dying minutes but had to settle for a Murphy free as they came up short and narrowly missed out on a quarter-final spot.