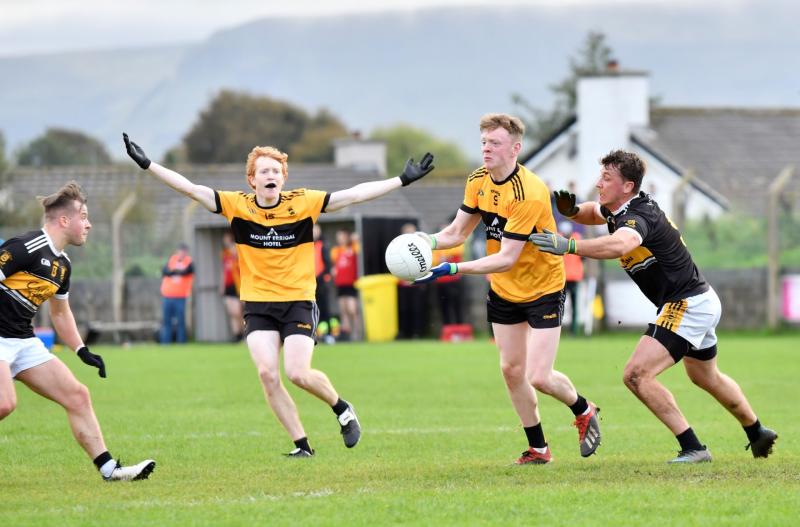 Kevin Kealy on the ball for St Eunan's with Eoin McGeehin in support while Paul Brennan and Timmy Govorov close in for Bundoran Picture: Ger Foy

St Eunan's were made fight all the way before securing the quarter-final spot against Bundoran in Gaelic Park.

In a game that had a few twists, St Eunan's pulled away in the last 10 minutes to secure the win after Bundoran had fought their way back into a close contest.
Bundoran had the advantage of the breeze in the opening half and scores were hard to come back.
At half-time St Eunan's held a narrow one point lead - 0-5 to 0-4 - with Darragh Mulgrew leading the way for the Letterkenny men at midfield.
In the third quarter, the Letterkenny men opened the gap to five - 0-9 to 0-4, but there was a sting in the Bundoran tail. A goal from Cian McEniff had the margin down to one - 0-9 to 1-5 - with about 10 minutes left.
Niall O'Donnell was introduced by Rory Kavanagh and the county man hit two points to steady the ship as St Eunan's outscored the home side 0-6 to 0-1 in those vital last minutes.
The home side weren't happy when Cian McEniff was fouled on his way goal and didn't even get a free, but in the end St Eunan's prevailed and secured their quarter-final place.
Apart from the excellent Mulgrew, Conor Park was outstanding for the winners at corner-back. Peter McEniff also impressed hitting a couple of points from wing-back.
Bundoran will be happy that they put up a brave fight despite being short a big number of regulars including Jamie Brennan, Ciaran McCaughey and Gary Clancy.