BOTH SIDES FIELD UNDERSTRENGTH SIDE 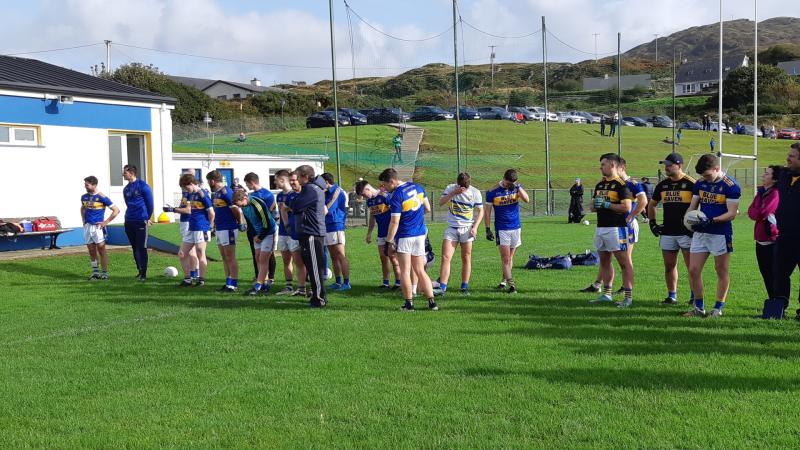 In the dead rubber game in round four of the Michael Muprhy Sports senior championship Kilcar won the battle of the reserves.

With nothing at stake both sides rested a big number of players. There was no Dáire Ó Baoill, Neil or Eamon McGee, Cian Mulligan, Eamonn Collum or Odhrán Mac Niallais for Gaoth Dobhair while Mark and Ryan McHugh, Patrick McBrearty and Ciaran McGinley were notable absentees for Kilcar.
Michael Hegarty was the recipient of a special presentation before the game to mark his 100th game for the club the previous weekend against Ardara while Kevin Cassidy started at full-forward for Gaoth Dobhair.
The sides were level after 10 minutes with Stephen McBrearty and Eoin Cormack firing over for Kilcar while Gavin McBride and Ethan Harkin replied for Gaoth Dobhair.
By half-time Kilcar had opened a five point gap - 0-8 to 0-3 - with further points from Stephen McBrearty (2), Eoin McHugh, Ryan O'Donnell, Oran Doogan and Mark Sweeney while Michael Carroll had Gaoth Dobhair's other point just before the break.
Kevin Campbell (45) and Mark Sweeney (f) extended the Kilcar lead before Ethan Harkin and James Boyle (f) hit Gaoth Dobhair's fourth and fifth.
There was a bit of excitement in the 44th minute when Kilcar were denied a goal by a goalline save by Peter McGee and Gaoth Dobhair went upfield for Michael Carroll to power to the net.
His reward for scoring was to be immediately substituted with Kevin Cassidy coming back in.
Kilcar took over again with the impressive Stephen McBrearty hitting four while Michael Hegarty and Ryan McShane also hit points. Could it be Michael Hegarty's last point in Towney?