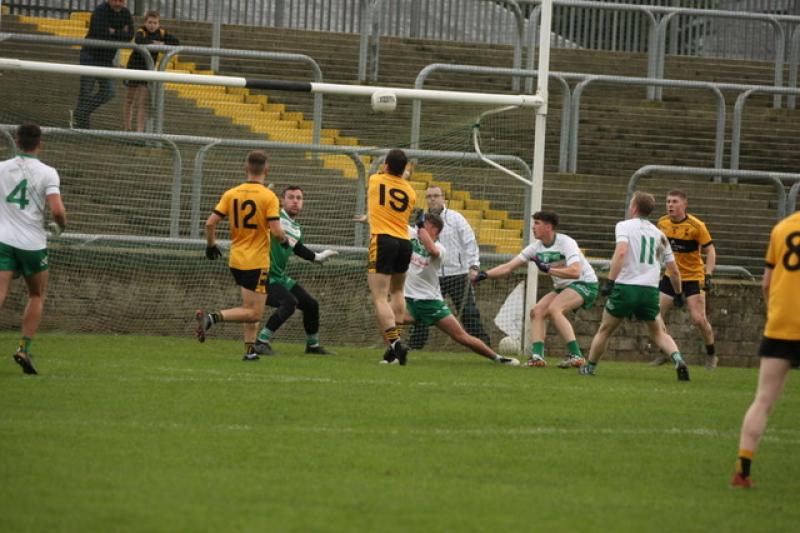 14-man St Naul's put it up to St Eunan's for a long time in MacCumhaill Park but in the end the Letterkenny side prevailed.

There was a disastrous start to the game for St Naul's as Stephen Griffin was red carded after just 51 seconds, after he clashed with Eamonn Doherty.
It meant that the Parish of Inver side were on the back foot from the start and one wondered what might have happened if Griffin had stayed on the field.
St Eunan's looked flat but were still able to be 0-5 to 0-1 ahead at the first water break. Points from Conor O'Donnell snr (fisted effort), Shane O'Donnell, Kieran Tobin, Niall O'Donnell and Conor O'Donnell jnr.
Gavin Mulreany came forward to kick St Naul's only point of the quarter after Barry Griffin was fouled.
Mulreany came forward for another free after the water break and was short and there wasn't one St Naul's player in the forward half of the field.
Conor O'Donnell jnr landed a sixth point for St Eunan's on 27 minutes while Stuart Johnston hit a great point for St Naul's after great work by Diarmuid Gallagher in turning over the ball in his own half.
Niall O'Donnell was almost in for a goal at the start of the second half but Brendan McCole got back to make a great block. Four minutes in Barry Griffin won a free for Daniel Meehan to point.
And on 36 minutes St Naul's were back on terms thanks to an og from Caolan Ward, who knew little about it. Peadar Mogan had found Brendan McCole going through with a brilliant ball. McCole went for goal but Shaun Patton saved but the ball richocheted off Ward to the net.
St Eunan's went back ahead through Shane O'Donnell on 41 minutes. Eoin McGeehin pushed the lead to two four minutes later and from a free moved on Niall O'Donnell made it 0-9 to 1-3 at the second half water break.
Brendan McCole stopped a tap in goal but points followed from Conor O'Donnell jnr (free) and Conor Parke to push the lead out to five.
Any chance of a surprise result ended when a St Naul's free went astray across the field and Shane O'Donnell had a straight run on goals and fired past Gavin Mulreany.
Peadar Mogan hit a great point in reply as the game drew to an end. Caolan Ward pointed at the right end after a good run.
But there was another great goal for St Naul's as Michael Coughlan waltzed his way through the St Eunan's defence to slide home with his left foot. It didn't affect the result but it reflected the effort that St Naul's had put into the contest.
St Eunan's would add a second goal with Conor O'Donnell jnr making the opening for Kieran Tobin to fist home. Peadar Mogan replied with a point from a free to complete the scoring