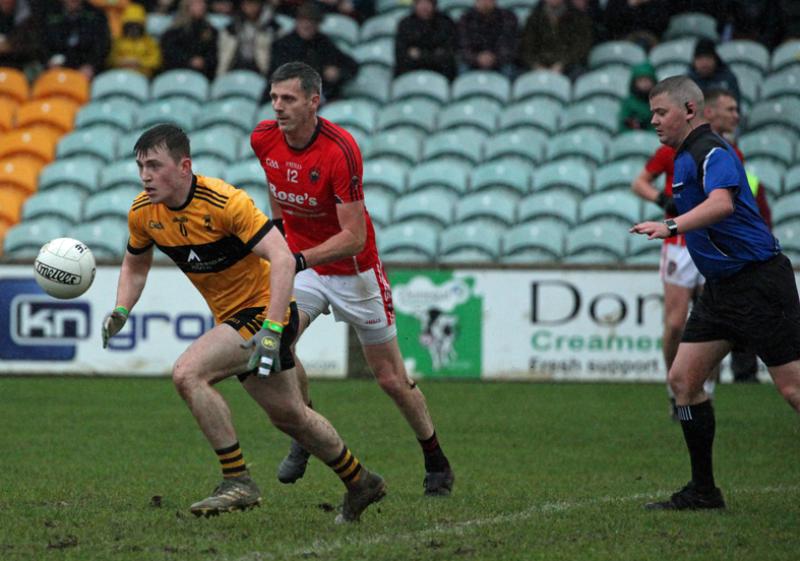 St Eunan’s are through to a first Donegal senior football championship final in six years after pulling clear of St Michael’s in the second half.

In the teeming rain, the Letterkenny men overcame St Michael’s, who had captain Liam Paul Ferry sent off in the first half, with a spirt of scores in the final quarter.

St Eunan’s led for the first time four minutes into the second half when Padraig McGettigan, on as a substitute at the interval, nailed a majestic point from the left flank. McGettigan’s effort made light of both overhead and underfoot conditions.

St Eunan’s might have taken a real charge of the evening two minutes later. McGettigan’s dropping ball in from a similar position was dropped on the edge of the square, Eoin Dowling was unable to covert and St Michael’s breathed a sign of relief with Carlos O’Reilly restoring parity from the next play,.

Eoin McGeehin polished a good St Eunan’s move to inch Rory Kavanagh’s side 0-6 to 0-5 ahead at the second water break.

O’Donnell’s massive score, 11 minute from the end, put two between them and it felt like daylight - which had long since faded in the glow of the floodlights.

Eoin Dowling and Kieran Tobin, two of the youngsters who have emerged through the O’Donnell Park ranks, kicked the final two points to confirm St Eunan’s place in a first final since their 2015 defeat by Naomh Conaill.

St Michael’s were a point in front, 0-4 to 0-3, when they were reduced to 14 men. St Eunan’s forward Niall O’Donnell was on the ground when referee Mark Dorrian showed Ferry the red card.

A free by O’Donnell, six minutes into added time at the end of the half, brought the teams level, 0-4 apiece, at half-time.

The number of participants was evened up for a period by then, too, with St Eunan’s defender Aaron Deeney sent to the sin bin for his part in a collision with Stephen Doak.

It is ten years since St Michael’s only previous appearance in a senior final, when they lost to Glenswilly.

Semi-final meetings with St Eunan’s have left St Michael’s with regretful pangs before. In 2006, St Michael’s looked destined for the final when Ross Wherity pounced, then a county minor, for the winning goal.

While St Eunan’s were convincing 2-16 to 0-7 winners over St Michael’s in a 2015 semi-final, the black and amber needed a Darragh Mulgrew goal the previous year to win a tense tussle.

St Eunan’s took possession a few seconds after the throw-in and held the ball until Niall O’Donnell popped a free wide in the third minute.

A long-range Michael Langan score fired St Michael’s in front two minutes later and the Creeslough-Dunfanaghy side were 0-3 to 0-2 ahead at the first water break, not called until the 21st minute.

A couple of games into the campaign, Kevin Gallagher stepped down as the St Michael’s manager and Daniel McLaughlin, a panelist in 2012 when Donegal won the All-Ireland, assumed charge.

Hugh O’Donnell, on song for St Michael’s in this Championship, and O’Reilly, with a tidy point from the right, gave them the edge - and they were good value for it at that point.

A wonderful point off the outside of Christy Toye’s right foot doubled the lead as St Michael’s moved two in front.

Conor O’Donnell senior landed one from the stand side to reduce the arrears before full-back Ferry was given his marching orders.

St Michael’s scored just one point in the second half and, as they trudged across the heavy ground, they felt the familiar what ifs.

After narrow semi-final defeats in each of the last two years, St Eunan’s advance. They await the winners of the second semi-final, which takes place at O’Donnell Park tomorrow between Kilcar and Naomh Conaill.