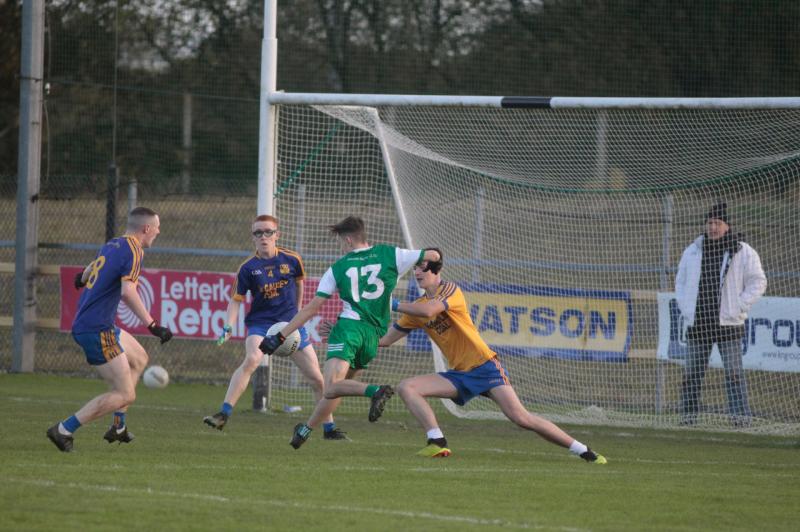 It was a good all-round display from the Parish of Inver side, who withstood a great comeback from Muff in the final quarter.
Conor Campbell was the player of the first quarter after Kevin Lynch had opened the scoring for Naomh Padraig with just over a minute on the clock.
By the water break St Naul's were 0-4 to 0-2 ahead with two from Campbell and one each from Niall Prenderville and Declan Duignan.
Daniel McFadden had the second Naomh Padraig point.
Then Campbell struck just after the water break, availing of a slip from a kick-out to power through and finish to the corner of the net.
Rian Gallagher almost replied for Naomh Padraig, but he was crowded out at the end. Kevin Lynch added a point for the Inishowen men but Johnathan O'Driscoll cancelled that.
Naomh Padraig finished the half strongly with a Rian Gallagher point and then Oisin McIntyre hit a post. It looked as if St Naul's keeper Peadar Shallow was fouled but referee James Connors didn't give it and the ball fell to Cormac Doherty who hit first timed just over the crossbar.
Half-time: St Naul's 1-5, Naomh Padraig 0-5.
The third quarter was scoreless until the 47th minute when Ethan Kenny broke forward and found Conor Campbell on his shoulder. Campbell combined with Odhran Breslin to fire home a second goal.
Cormac McColgan replied with a point after a great run to leave it 2-5 to 0-6 at the second half water break.
McColgan and Cian Gallagher cut the lead to three with nine minutes left as Naomh Padraig began to dominate around midfield.
A turnover led to Kealan Henry firing over another and Barry Burke denied Kevin Lynch a certain goal. A minute later it was down to one as a McColgan effort for a point was batted out by Shallow but Daniel McFadden fired over.
There was another twist as Conor Campbell availed of a turnover and drove through to fire home a third goal.
Kevin Lynch and Cian Gallagher landed points for the losers and in the final stages referee James Connors handed out two reds (Cianan Mulcahy, Muff and Odhran Breslin, St Naul's as well as a host of yellows and one black (Jason Lynch, Naomh Padraig). It all stemmed from a poor decision not to award a free to St Naul's.
It was fitting that man of the match Conor Campbell closed out the game with a free won by one of the main men O'Driscoll. Apart from those two the Kenny twins, Oisin Mogan and Barry Burke were outstanding for the winners.