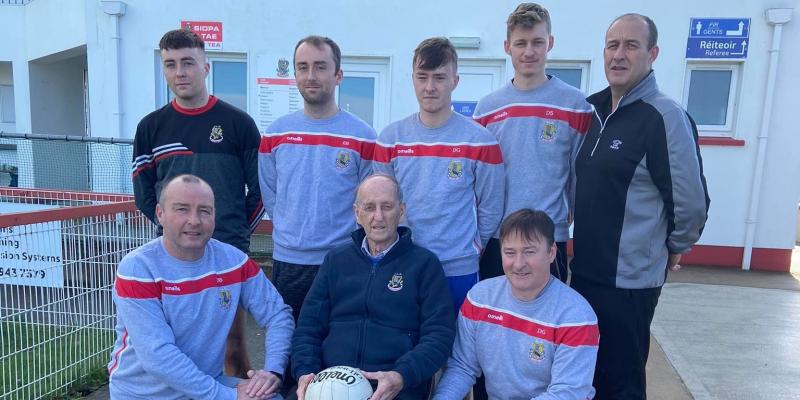 With Dungloe in the grip of football and hurling fever this week after success for the club’s hurlers and U-15 footballers, it could reach fever pitch on Saturday next as the senior footballers take on Cloughaneely in the Donegal Intermediate Championship decider in O’Donnell Park, Letterkenny.

The town has been turned red in recent weeks with flags and bunting adorning every pole and lamp post.

The excitement is fever pitch and none more so than at the home of the club’s senior Vice-President Fred Sweeney.

Fred, who turns 84 next Spring, has served the club as a player, mentor, coach, referee, master fund-raiser and all round stalwart. Fred has been red and white all his life.

And he has every reason to be floating on air this week. Four of his grandsons will take to the pitch next Saturday as Dungloe go in search of intermediate football gold in the intermediate and intermediate reserve.

As well as the four grandsons, his two sons-in-law are managing the teams.

Dylan Sweeney, Daire Gallagher and Oisin Bonner are all key members of the Dungloe senior team which is managed by Dessie Gallagher (father of Daire). Dessie is married to Fred’s daughter Marcella.

Dylan Sweeney is a son of John Sweeney, Fred’s son. John was a member of the Donegal All-Ireland U-21 team of 1987 and he was also on the last Dungloe team to win the intermediate championship. Dungloe defeated Naomh Conaill in the 1986 final in Pearse Park, Ardara.

Oisin Bonner is the son former Naomh Muire and Tir Chonaill Gaels stalwart Owen Bonner. Owen is married to Fred’s daughter Marie, and their other son, Eimhin, will line out for the Dungloe reserves in the B final, the curtain-raiser on Saturday. Owen is joint manager of the reserve team with Paul McGarvey.

“There’s great excitement about the town and the area. The hurlers did very well on Saturday and the U-15 footballers won too. There is a great buzz about the whole club,” said Fred earlier this week. “Hopefully the seniors can do the same now this Saturday,” added Fred, a double senior championship winner with the club from 1957 and ‘58 (pictured above), the last time the Dr Maguire Cup resided in the Rosses.

“Naturally I’m very proud of the four boys. They have put in a big effort this year and they are all very good footballers.

“They’ve beaten some good teams. They beat a very good Glen team in the semi-final. But Cloughaneely are a good team too, they are up playing in Division One in the league.

“I wasn’t at the semi-final. I don’t go to games any more unless maybe home games. I have a bad knee and I can’t walk very far but at home games I can watch it from the car.

“I don’t think I would be able to watch a game any more. I was listening to the radio the day they beat Glen and the report came on they were leading by four points with 15 minutes to go.

“I turned off the radio. I couldn’t listen any more in case they would lose and I didn’t turn on the radio again until I knew the result. Pat the Cope rang me with it.”

Fred won’t be at Saturday’s final either.

“No, I won’t go to the final. I couldn’t stick it, the nerves would be too much and I wouldn't be able to enjoy it.

“I won’t listen to it on the radio either. I’ll be here alone, I may even go for a drive in the car and I ring someone at half-time for the score and again when it is over.

“Hopefully they can win. I was saying to Oisin the other day, I hope to see him marching down the town on Saturday evening with the cup.”