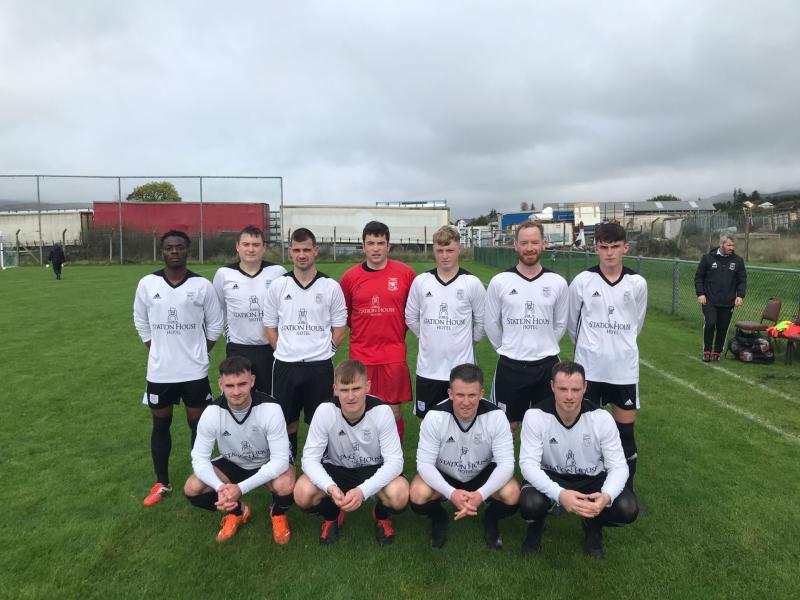 Letterkenny Rovers and Monaghan United had to be content for a share of the spoils as the sides drew at the Aura Centre on Saturday afternoon in the only game of the Ulster Senior League this weekend.

Rovers were quicker out of the blocks with Simon McGlynn shooting narrowly wide early on before Rovers were indebted to Matthew McLaughlin on 6 minutes who made a superb goal-line clearance to deny Mark Mulligan giving the  visitors the lead.

Rovers started to click and after McGlynn and Adria Delap came close they opened the scoring on 12 minutes. Shane McNamee fed Tim Callaghan and when his shot was well saved by the legs of Monaghan ‘keeper Mark Byrne the ball fell to Matthew McLaughlin, who slammed home the rebound.

That was no more than Rovers deserved after a busy start to the game and they ought to have doubled the lead with McGlynn heading narrowly over.

Monaghan had a number of chances to level affairs with the lively Kevin Loughran and James Turley causing problems for the Rovers defence.

McGlynn again headed narrowly wide while Monaghan’s best chance to level fell to Turley but his effort on the stroke of half-time was just inches wide of Christopher O'Donnell’s goal.

It was the Farney men who started the second half the brighter and they saw Dean Connolly’s effort blaze over on 48 minutes when well placed after some initial good work by the rampaging Enda Hession down the right hand side.

Gareth Doherty shot narrowly wide for Rovers before Monaghan levelled on 72 when the lively Hession again was instigator. His effort from the right fell to Kevin Loughran and he blasted home.

Rovers regrouped and twice hit the woodwork as they searched in vain for a winner with Matthew McLaughlin’s well hit free kick hitting the crossbar and Conor Tourish’s header hitting the base of the post on 81 minutes while McLaughlin also fired wide late in the proceedings.

Spoils shared at the Aura in what was an eventful encounter well marshalled by referee Barry Maxwell.