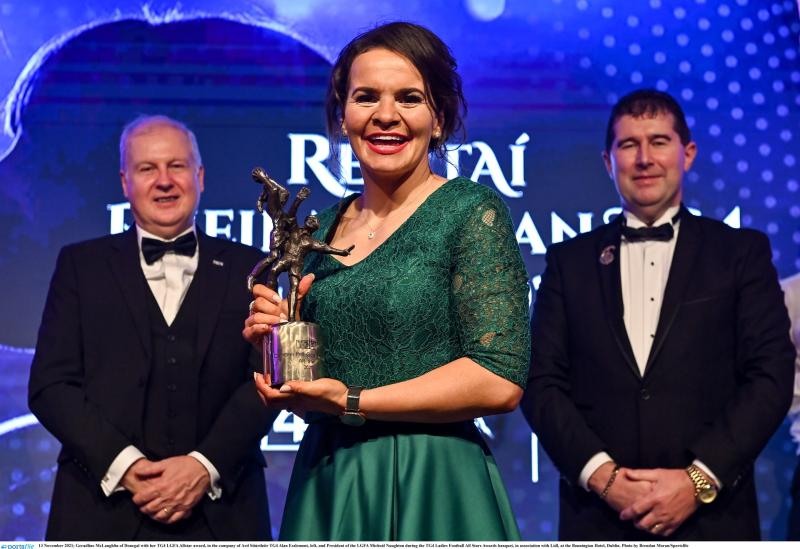 Geradline McLaughlin of Donegal with her TG4 LGFA Allstar award, in the company of Ard Stiúrthóir TG4 Alan Esslemont, left, and President of the LGFA Mícheál Naughton

Geraldine McLaughlin received her All-Star award on Saturday night. She is recognised, admired and respected for her skill, sportsmanship and humility. The Temon native has illuminated ladies football throughout her glittering career and her acknowledgement as one of Ireland's top footballers is a fitting reward.

Not everyone with skill makes the grade, let alone rises to the extraordinary heights she has achieved. Her leadership, organisational skills and the sheer effect of her personality on her colleagues has played a massive role in seeing Donegal compete at the top table in recent years. Geraldine is simply a credit to herself, her club Termon and to her county.

Did the club championship deliver any county potential?

I missed the county final, but those who were in attendance or especially the neutral followers were disappointed with the fare on offer.

I believe the first half in particular saw a return to the massed defences which did not and never did make for an entertaining spectacle. But that will not matter in Letterkenny where the Dr Maguire Cup will reside for the winter.

St Eunan’s are to be congratulated on upsetting the odds as I believe they were in no way flattered by their margin of victory. I believe the young Letterkenny team took the game by the scruff of the neck from the throw-in and Naomh Conaill failed to come up with the answers on this occasion.

I, like so many others, was more than a little surprised with the result because looking at St Eunan’s performance against St Naul’s they looked anything but potential county champions.

Manager Rory Kavanagh deserves credit in his first year at the helm for getting an excellent display from his side on the day it was most needed. Naomh Conaill picked the wrong day not to turn up and when the scores began to pile up against them they lost confidence.

The biggest surprise for me was that Naomh Conaill seemed to leave their customary desire behind them when they headed to Mac Cumhaill Park. In looking at many games in the championship this year I tend to keep an eye for some new blood that may have the ability to form part of a county panel in the New Year .

Every top team needs an injection of fresh legs - something that former Dublin manager Jim Gavin had at his disposal during his unprecedented championship years .

So I was disappointed to not come across any or many players who have the ability to bridge the gap between being a top class player with an ability to deliver the goods in the green and gold jersey.

The step up from club to county football is significant and a player who does make the grade needs loads of ability, confidence and self belief to bridge that gap.

One player who I believe was more than a little disappointed not to get more game time in the county jersey this year showed in his team’s Intermediate victory over Dungloe on Saturday that he has a lot to offer.

That was Jason McGee of Cloughaneely, who played the proverbial blinder. One aspect of Jason’s play that is so impressive is the amount of time he seems to have on the ball. He is not one of the quickest players in the game, yet he has the knack of eluding opponents and creating space to either get a shot or a pass away.

Good footballers always seem to have more time on the ball than their opponents. Nobody knows how they quite manage it but they do. With Michael Langan and Hugh Mc Fadden both forceful performers, hard to knock off the ball and able to take on opposing defences with real menace, Donegal are well served in the engine room of the team and the option of locating Michael Murphy on the edge of the opposing square this coming season would have opposing defences sleeping with the light on.
The Ulster Club Championship, where St Eunan’s will fly the Donegal flag in the coming weeks, is a step-up from county championship football. It is both faster and more physical. Donegal teams do not have many positive CVs in Ulster and this is an opportunity for the Letterkenny side to show Declan Bonner exactly what they have in the tank.

The men in the middle, the referees, do not get much or any credit for their ability but in Enda McFeely, Jimmy White, Seamus McGonagle and Marc Browne, the county has four referees as good as any in the country and the role they play in doing a top class job should be appreciated and never underestimated.