Na Rossa on the up and aiming to stay up 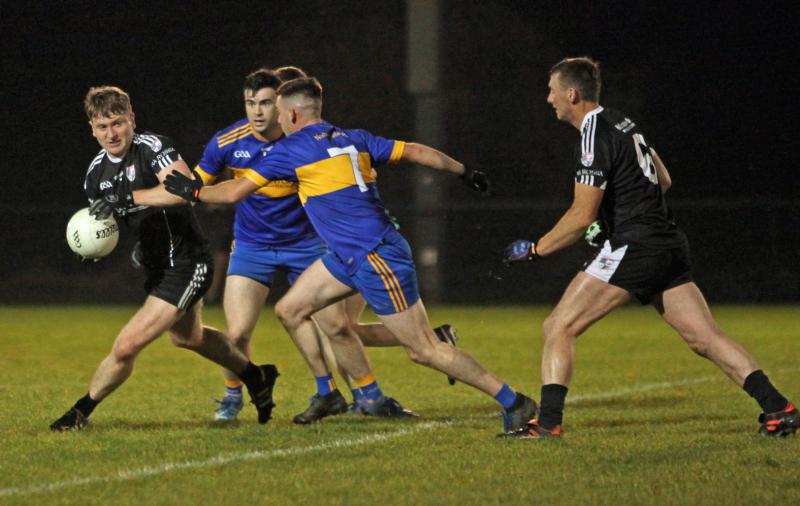 John Paul McCready has scored many precious points and has amassed plenty of big tallies for Na Rossa over a long and glistering club career.

But few will be more precious than his last gasp winning point seven minutes into injury time against Naomh Padraig in the Division 4 promotion play-off last Saturday in Convoy.

The 40-metre free - word is it’s getting farther out on the banks of the Gweebarra day by day - earned Na Rossa promotion to Division 3 next season.

The wily corner forward a couple of minutes earlier floated in the long free, which stabbed to the back of the Naomh Padraig net by Johnny Bonner to tie up the game.

“Shane Toolan, the referee, told me it was the last kick of the game. So I had nothing to lose really. I just hit and it went over and saved us extra-time and we were up,” McCready calmly said afterwards of his late free.

McCready kicked a point from a similar position in the first half too, also from a free. But in between his two strikes he left the free taking duties to his younger teammates.

“A number of the other lads had been hitting the frees so I left them to it until the kick at the end,” he said.
“I had a free before it too and I was going to pop it over the bar. But Johnny Bonner said we didn’t have time to drop it into the goalmouth and ironically it was Johnny who stabbed it home and it worked out well for us.

“It was great to get out of Division 4. We are stuck in it long enough. For the young lads coming through you have a better standard of football in Division 3 and hopefully they can push on now next year. I don’t know if I’ll be there or not!
“I'm on the wrong side of 40 so we’ll see. That free may be my last kick and it might not be a bad way to leave!”.

Na Rossa just dropped three points in their league campaign. They drew with the league winners Carndonagh away and a home defeat to Naomh Ultan was the only game they lost.

“The way the league turned out the draw in Carndonagh was a good result because Carndonagh were the form team and they went on to win the league,” said Cormac McHugh, the Na Rossa manager.

“That was at the start of the season and we were eight points down at half-time so to come back and draw against Carndonagh up there was a great result.

“We just did not play well against Naomh Ultan and they beat us and deserved to. They were the better team on the day.

“But Naomh Ultan are a good side and there are a lot of good teams in Division 4. It is a very tough division and everybody is fighting to get out of it.

“We also decided we needed to get off to a good start. If you want to win promotion a good start iis essential because it creates momentum and winning is a good habit to get into.

“It also means later on you can have a wee blip as we had against Naomh Ultan and not unduly affect your chances.”
A former club stalwart at centre half back and many other positions during his playing days, McHugh, in his second year in the manager’s job has surrounded himself with a strong management team.

Joe Gallagher is the assistant manager, Patrick Caulfield is the trainer, Gerry McHugh a team mentor with Ray Melly looking after logistics and Packie McDyre doing the stats.

McHugh also added county player Kieran Gillespie from Gaoth Dobhair is on board as strength and conditioning coach.
McHugh added: “We have a good mix of young and more experienced players. We have a group of lads like Christian Bonner, John McDyre, Odhran Molloy, Sean McMonagle and Brian O’Donnell in the 23 to 24 age category.

“Johnny Bonner and Brian O’Donnell joined us this year and they are great additions to the team. Johnny transferred from Naomh Conaill and Brian joined us from Dungloe.

“We’ve a good squad and Oisin Caulfield and Cillian Bonner are coming through from the minors and they will be big additions to the squad next season.

“It was important for the young lads coming through that we are going to be playing in Division 3 next season. Hopefully we will be able to build on this season's success next year and consolidate our position - not like the last time when we went up we did not win a game and came straight back down the following season”.