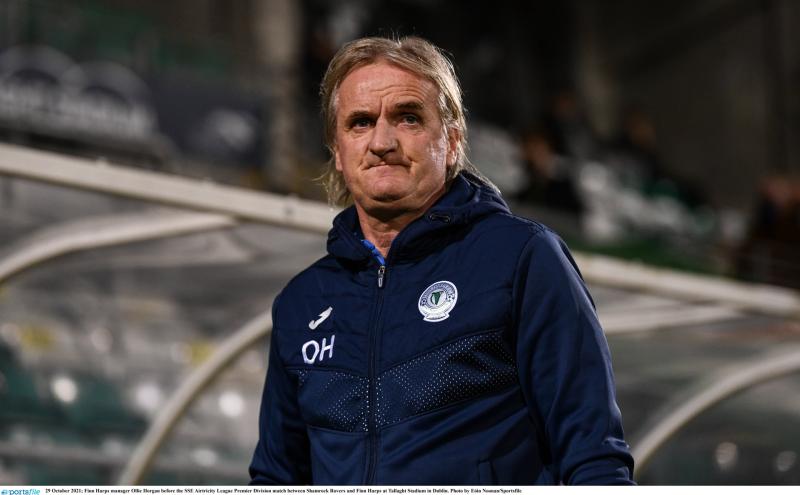 The dust mightn’t have settled yet on Finn Harps’ emphatic last day of the season victory over Longford Town, which ensured survival in the SSE Airtricity League Premier Division, but the club are already building towards next season.

A crowd of over 4,000 went through the turnstiles to witness Ollie Horgan’s side hammering the midlanders on a 5-0 scoreline, with Will Seymore, Ryan Connolly, Karl O’Sullivan, Tunde Owolabi and Luke Rudden getting the goals.

Aidan Campbell, Finn Harps marketing officer, says the board of the Ballybofey club will meet next week before then meeting with manager Ollie Horgan later in the week.

“The board will meet next week to review the season just finished,” Campbell says. “Then we will sit down with the manager and see what we have for next season. There’s a lot to discuss so we’re eager to get sat down sooner rather than later.”

After Friday’s match, Harps defender Johnny Dunleavy, a lifelong supporter of his hometown club, captured the feeling when he said: “We want to make Finn Harps a big, big club and we want to make kids dreams to want to come and play at Finn Park. It’s brilliant to see that here tonight.

“I love being around the town and there’s a good atmosphere around the club and the town. There’s a lot of positivity. People enjoy coming to watch us and we can play some good stuff. We’re not a million miles away from being a good team. Hopefully we can just build on that next year."

Campbell believes that the fare on offer at Finn Park over the last few months has seen a new era of supporter, as was evident with the scenes at the final whistle last week and as children gathered outside the Harps dressing-rooms for mementos from players.

“We’re trying to encourage adults and children who live locally to come out and support the team,” Campbell added. “The one thing we have always offered is live football and we’re working on a season ticket pricing strategy for next season and we aim to have these season tickets on sale by the end of next week.

“It’s been a tough couple of years with the pandemic but it was brilliant to see the scenes at Finn Park last week and we wish to thank everyone who stood by us.”

Horgan won his 100th match with Harps last Friday. Since taking the job in late 2013 and winning promotion to the top-flight two years later, Harps have played all but one season since in the Premier Division since.

With Shelbourne, who have introduced a management ticket of Damien Duff and Joey O’Brien, replacing Longford and UCD facing off with Waterford on Friday for the last remaining spot, the 2022 campaign is likely to be even more competitive.

Derry City have already brought in Will Patching, Michael Duffy and Patrick McEleney. Adam Foley is the only confirmed departure from Harps as yet, although Horgan will be eager to meet the board and get sitting down to both his current squad and potential targets.

A measure of how competitive the season just finished is that Harps managed to beat every other side in the division bar one - newly-promoted Drogheda United - and were still running the gauntlet on the final day.

“Next season promises to be even more competitive again,” Campbell added. “We will be launching a prize draw in the coming weeks, which will be drawn before the start of next season and would always encourage anyone who wishes to support Harps to sign up to the 500 club. It is a vital income for us in terms of the first team squad. We will always be thinking of ways to fundraise.”

The club are currently preparing for their League of Ireland license for 2022 and the AGM will take place next month. Harps will launch a new away jersey in early December in time for the Christmas market and sponsors global Esports organisation Guild Esports PLC, who are co-owned by David Beckham, are already committed to next season. A new home kit will hit the shelves before the 2022 season kicks off.