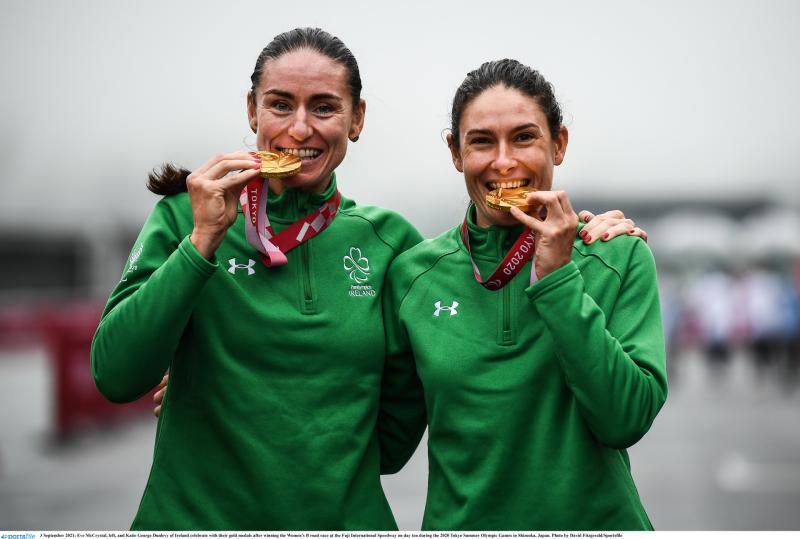 Katie-George Dunlevy and Eve McCrystal are RTE Sports team of the year for 2021, an incredible achievement. They were presented with their award at the ceremony in RTE on Saturday night.
Dunlevy, whose father is a native of Mountcharles, took the award with her tandem partner after their double gold and silver medal performances at the Tokyo Paralympics
The two Irish cyclists were up against serious opposition last night, including the Galway Camogie team, Leinster Rugby, the Limerick Hurlers, Meath Ladies Footballers, Olympic rowing gold medal winners Paul O’Donovan and Fintan McCarthy, Shamrock Rovers, the Tyrone Footballers and the women’s four rowers, who won bronze at the Olympics.
They were present for the awards on Saturday night and Dunlevy was shocked by the award.
“I can’t believe we’ve won this, we’re blown away,” said Dunlevy on accepting the award last night. “It’s been an incredible year and this actually just tops it. It’s a really special moment, I can’t believe we’ve won it.
“This is really for any blind or partially sighted child aspiring to do something with their life, whether it’s sport or not; just believe in yourself and you can achieve. Just aim high and dream big, you can do anything.”
Dunlevy added she would continue with her racing until Paris 2024, though would take it one year at a time. McCrystal said she would race into next year, when the duo will aim for the World Championships in March, at which point she would assess the future.
Jockey Rachel Blackmore claimed the ‘sportsperson of the year award’ last night after a ground-breaking year. During 2021 she become the first woman to win the Grand National.
She was also the first female jockey to win the leading rider title at the Cheltenham Festival. She took six wins during that week of racing, including in the Champion Hurdle
Republic of Ireland goalkeeper Gavin Bazunu won the RTÉ ‘young sportsperson of the year’ award, which cyclist Lara Gillespie was also shortlisted for after her silver medal in the U-23 individual pursuit at the European Championships.
Ireland’s lightweight rowing head coach Dominic Casey won the ‘manager of the year’.