Inishowen U16 Girls recognised in Ravenhill for commitment to rugby in front of 18,000 spectators 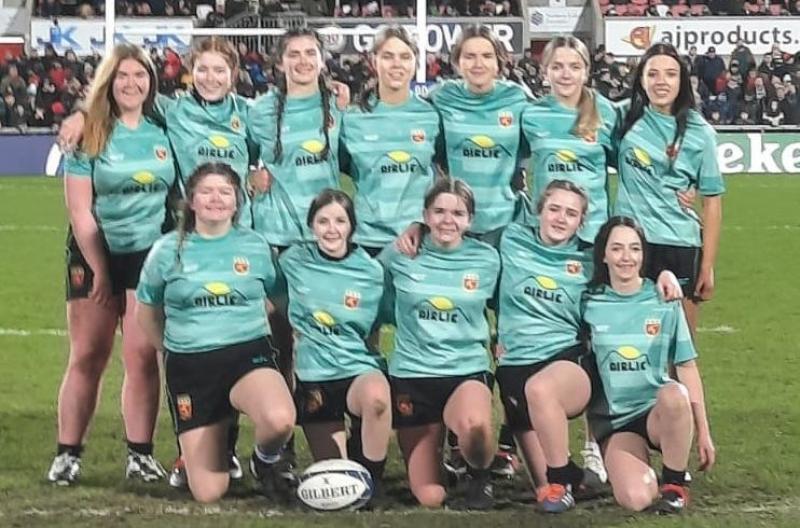 Inishowen Under 16 Girls who beat City of Derry at Ravenhill by two tries to one.

The Inishowen girls Under 16 rugby team travelled to Ravenhill in Belfast on Saturday where they were recognised for their commitment to the sport by the Ulster Branch.

The girls played the City of Derry Under 16s at half time on the Ravenhill pitch of the Ulster V Clermont Auvergne match in front of 18,000 spectators.

It was a marvellous occasion for the girls who were suitably nervous taking the pitch in front of such a huge crowd. They received a marvellous reception from the spectators when the announcer introduced them and all the girls took a brief second to take in the atmosphere and a memory that will give with them probably for their entire lives.

The match itself was an even affair with Erin Mc Conalogue opening the scoring when she went around the outside of the City of Derry defence to score in the corner.

The Derry girls then laid siege to the Inishowen line and eventually the pressure told and our line was breached.

Inishowen attacked again and after a series of rucks Erin Mc Conalogue again broke through the middle of the Derry defence to put Inishowen back in front.

From the restart Inishowen held onto the ball until the final whistle to win a hard fought and memorable victory much to the delight of the large support from Inishowen in the Family Stand who made the trip to support the team.

The coaching team of Oliver and Tara Mc Conalogue deserve great credit for preparing the team and also instilling a winning mentality in these young ambassadors of rugby.

These girls it must be remembered played their first rugby game and the clubs first female rugby game at Moss Road only three months ago.

There are also a number of excellent Under 14s who are part of the same coaching ticket and the future is indeed bright for this group.

The girls have shown that they can really compete with the bigger and more traditional rugby clubs across Ulster and expectation is high that they will rattle a few cages over the coming weeks! We wish the U14s and U16s the very best of luck.