The ‘Heritage Communities’ Award was scooped by Rosses Radio 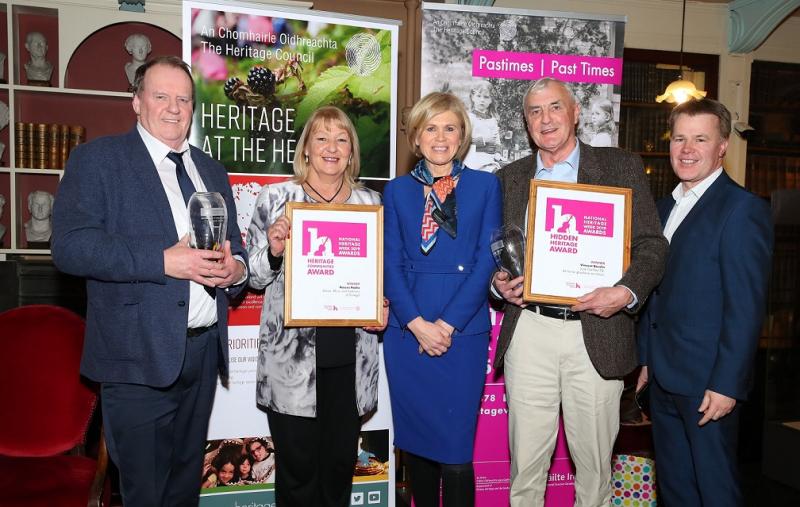 The ‘Hidden Heritage’ Award was won by local historian Vincent Breslin for his event ‘Look-Out Post 76: An Hut ar Ghualainn an Chnoic’ at the National Heritage Week awards which were recently held in the Royal Irish Academy in Dublin.

The dedication of individuals and community groups across Ireland to preserve and promote our heritage was recognised at the event which was hosted by The Heritage Council and presented by RTÉ broadcaster Anne Cassin. Two County Donegal Heritage Week event organisers win two of the top awards.

Mr Breslin's event ‘Look-Out Post 76: An Hut ar Ghualainn an Chnoic’ explored the built and cultural heritage associated with Look-Out Post 76 at Bloody Foreland, which was constructed and occupied during ‘The Emergency’ (1939-1945).

The event shared previously undocumented stories from the families of men who had served in
LOP (Look-Out Post) 76, alongside stories gathered from the local community. It gave a unique insight into the role that the LOPs and the Marine Coastwatching Service played in defending Ireland’s coastline during this period in history.

The event included a small exhibition and a commemorative ceremony, where families of the men who had served in the coastwatching service during this period were presented with certificates.

The ‘Heritage Communities’ Award was won by Rosses Radio for its ‘Stories, Music and Traditions of Donegal’ event. The project comprised two full days of heritage and pastimes-themed radio programming, bringing together heritage groups across the Rosses in west Donegal, and broadcast to Donegal diaspora worldwide.

The programming featured live interviews with local people engaged in heritage projects, new documentaries, features on local National Heritage Week events, and the history of the Donegal music scene and sports. Carol Ann Webb and James Breslin from Rosses Radio accepted the award on behalf of the station.

“These awards are a fitting recognition for the thought, planning and hard work that went into organising these Heritage Week events” said Joseph Gallagher, County Donegal Heritage Officer.

“The success of Heritage Week rests with event organisers like Vincent and Rosses Radio who organise these events voluntarily to raise awareness, encourage appreciation and promote better understanding of our heritage.

Speaking at the awards ceremony, Chairperson of the Heritage Council, Michael Parsons said “I’m delighted to host the National Heritage Awards and to have the opportunity to meet some of the people involved in bringing our rich and varied heritage into the heart of their own communities, making it both relatable and relevant for modern audiences. I hope others will be as inspired as I have been, by the projects and activities showcased at our awards ceremony. The Heritage Council
remains firmly committed to growing and strengthening National Heritage Week and I commend all of those who participate in this wonderful event.”

Chief Executive of the Heritage Council, Virginia Teehan added: “It is an honour to provide a platform,
through National Heritage Week, for individuals and communities to demonstrate their dedication to preserving and promoting Ireland’s heritage. Every year, we are overcome by the levels of enthusiasm and commitment to showcasing our shared heritage. By embracing the value and beauty of our heritage we are ensuring its conservation for future generations.”

will focus on heritage and education. More information on National Heritage Week and how to get involved is available at www.heritageweek.ie.