Dumping continues to be a bone of contention in the west 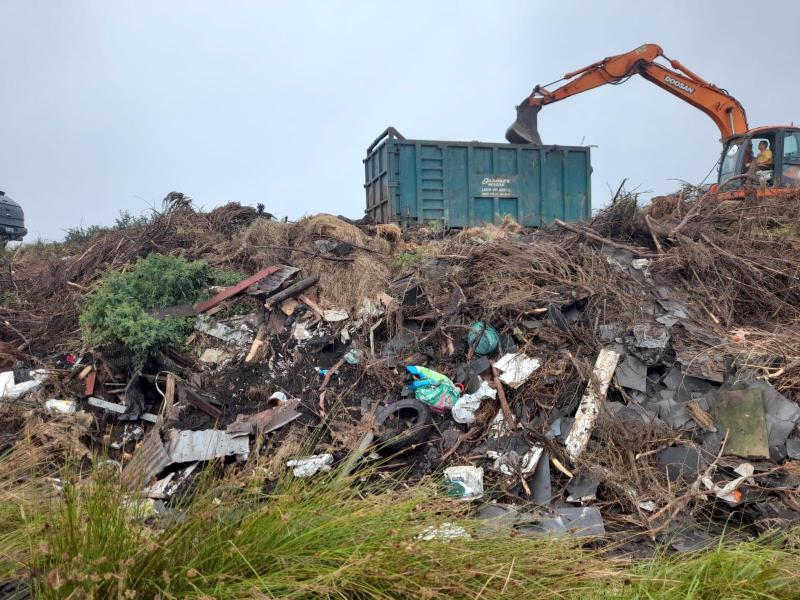 Rubbish was discovered in Falcarragh

Sinn Féin Councillor John Shéamuis Ó Fearraigh said that illegal dumping is continuing in the Glenties Municipal District area and he is angered by it.

The councillor was speaking at a Glenties Municipal District meeting on Tuesday last.

Cllr Ó Fearraigh referenced the large illegal dump that had been uncovered in Falcarragh recently. Twenty-eight tonnes of rubbish were dumped in an area outside Falcarragh town recently. He said it cost €12,000 to clean the area following the discovery. He added that he had recently been made aware that an illegal dump had been discovered at an Ardaigh Bheag - an area that had been cleared of rubbish three years ago.

Great atmosphere, food and music at Palestinian event in Letterkenny

“I am angry,” he said while commending the work carried out by the area’s litter warden Eoin McCallion.

“I would like to see more people working in the environmental section. The road department take on workers in the summer,” he said.

Sinn Féin Councillor Marie Therese Gallagher said that dumping is an issue during the summer months and said that ‘remnants of a toilet’ had been found in Carrickfinn on a road where children wait for the school bus.

The Dungloe-based representative said it was about looking at the services we need to get in place. She urged council authorities to look at the current waste water plan.

“They are pulling up near the road and dumping it into the tide. You are not going to change human behaviour. If we looked at a pilot scheme where there would be a wastewater treatment plan,” she said.

She added that the recycling centre in Dungloe was a victim of its own success and asked that it be opened for longer. She said that each time she traveled to the site there was a large line of cars in front of her. She added that regardless of what time she changed her visit to, it was consistently busy.

Independent Councillor Michael Mc Clafferty said that dumping was a huge issue in the area.

“We need to look at hidden surveillance cameras and look at hotspots and other areas. I know there are issues with data protection but we have to get around it,” he said.

In a statement from the council they have moved to remind the public to always ensure they deal with their waste in a responsible manner; to always use a permitted waste collector, waste collectors provide service for waste, recycling and food waste; use the waste and recycling services available at the 6 Recycling Centres located in Dungloe, Milford, Letterkenny, Laghey, Stranorlar and Carndonagh and to use the network of over seventy Bring Banks for glass and can recycling.