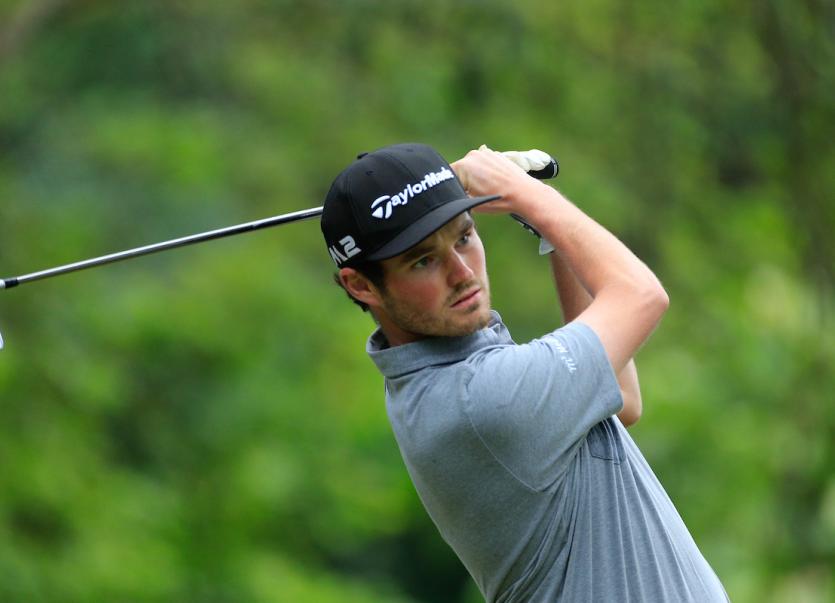 Ruaidhri McGee (with strong Donegal links)  and Cormac Sharvin will tee it up at this year’s Dubai Duty Free Irish Open courtesy of special invitations secured by Sport Ireland.

This year’s tournament takes place at Ballyliffin from 5-8 July. McGee and Sharvin received invites as they have the highest playing category among Team Ireland Golf members not already in the field.

McGee, 27 (a grandson of the late Micheal McGee of Downings and Highland Radio, and Sharvin, 25, are regulars on the European Challenge Tour where they both have playing rights. As the Dubai Duty Free Irish Open is part of the Rolex Series on the European Tour, McGee and Sharvin will be playing for a share of the $7m prize pot at Ballyliffin.

Last year Team Ireland’s Gavin Moynihan picked up a cheque for €84,505 after carding a final round 64 at Portstewart to finish inside the top 15.

John Treacy, Chief Executive of Sport Ireland said: “Sport Ireland is delighted to have secured two starts for Team Ireland Golf members Ruaidhri McGee and Cormac Sharvin, at this week’s Dubai Duty Free Irish Open. Ruaidhri and Cormac have shown themselves to be two of Ireland’s brightest golfing talents, and competing in a very strong field will be extremely beneficial to their continued development. Sport Ireland supports Team Ireland Golf to ensure Ireland continues to produce world-class golfers long into the future.”

Des Smyth, Team Leader of Team Ireland Golf said: “For our emerging professionals who have limited playing opportunities on the European Tour, an invitation to an event as prestigious as the Dubai Duty Free Irish Open is extremely valuable. Cormac Sharvin and Ruaidhri McGee will have the chance to test themselves against the very best and most importantly, they can earn significant prize money and world ranking points – which are the two things that matter most for a professional golfer. Without the support of Sport Ireland, players like Cormac and Ruaidhri would not get this opportunity. I am grateful to Sport Ireland for their commitment to Team Ireland Golf.”

Redmond O’Donoghue, Chairman of the Board of the Confederation of Golf in Ireland said: “Playing invitations received by Team Ireland Golf are essential for our players to progress in their professional careers. One good week, particularly at an event of the scale and magnitude of the Dubai Duty Free Irish Open, can be transformative for any player. Thanks to Sport Ireland Ruaidhri McGee and Cormac Sharvin will have a valuable playing opportunity at this year’s Dubai Duty Free Irish Open in Ballyliffin. Sport Ireland are great supporters of Team Ireland Golf and on behalf of the Confederation of Golf in Ireland, I thank them for their continued support.”

CORMAC SHARVIN
Cormac Sharvin 25, from Ardglass, turned professional in 2016 after a superb amateur career in which he won the AIG Irish Amateur Close (2013) and the Brabazon Trophy (2015) and was a member of the victorious Great Britain & Ireland team at the 2015 Walker Cup. So far this season, he has had three top-20 finishes on the European Challenge Tour. His best result came at Challenge de Espana in May where he tied for 15th place. He is currently 70th on the European Challenge Tour rankings (Road to Ras Al Khaimah).

RUAIDHRI McGEE
Ruaidhri McGee, 27, from Derry, turned professional in 2010. In 2015, he had his best season to date, finishing 27th on the European Challenge Tour rankings. He has one top-10 finish so far this season and has enjoyed a consistent run of form. He tied for 4th place at the Swiss Challenge last month. He is currently 57th on the European Challenge Tour rankings (Road to Ras Al Khaimah).