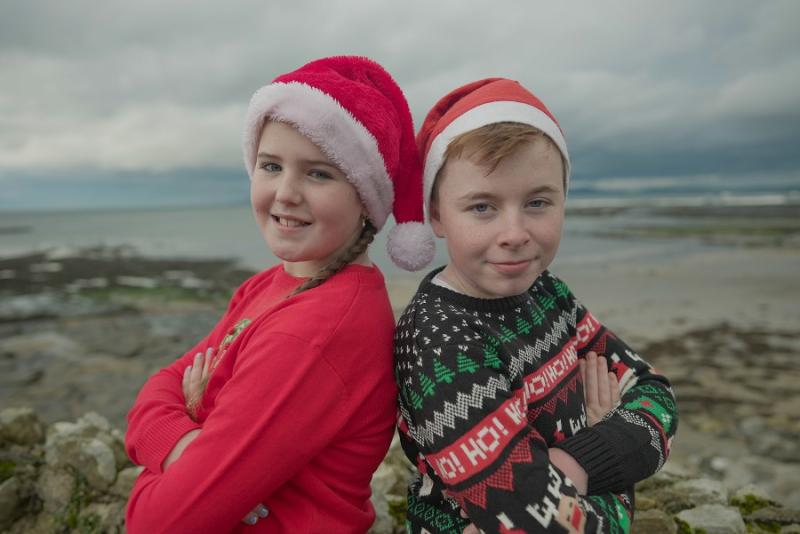 Two young rising stars of the music scene have come together to record a song that will strike a chord with Donegal people at home or abroad.

We’re Coming Home For Christmas echoes the sentiments of many people living abroad who are counting the days until they are on a flight back to Ireland.

The single which was recorded in Jim Corbett’s Newtown Studios in Bundoran was released to coincide with the Late Late Toy Show and is available on Spotify and iTunes /Apple Music.

It is part of A Kid’s Country Christmas from Ronin Productions and will be broadcast during RTE’s Christmas Schedule.
Featuring vocals by Caela Carr and Ethan Barron of the Wild Atlantic Wains, the single has also been distributed to radio stations nationwide.

Mr Corbett was full of praise for the professionalism of the two young singers, and for their beautiful vocals and stirring harmonies.

Bri Carr, who is the driving force behind Wild Atlantic Women and Wild Atlantic Wains said of the original composition: “It captures the essence of coming home for Christmas for all who are overseas and have been unable to come home until now; it is written about Caela's brother Ben, coming home from Nashville to celebrate his 21st at home on Christmas Day.

“Ethan has two brothers and a sister who are all waiting expectantly on Santa Claus to bring the Wains a hit for Christmas! The Wains have been besties since the pram, and at 12, are buzzing for the documentary to air and the song to hit the airwaves.”

The song speaks of ‘The smell of Christmas in the kitchen’ and how ‘you tell us on the phone how much you’ve missed us,’ a sentiment that is more poignant and significant than ever in these difficult times.

The people of Donegal are encouraged to get behind Caela and Ethan to make sure the single is a big hit this Christmas.