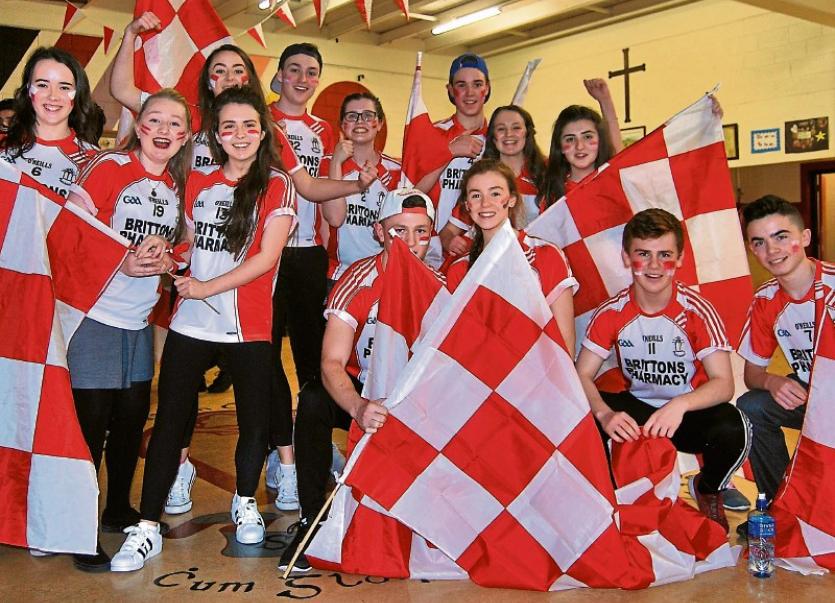 Wednesday, 10th February is the Open Night of the Abbey Vocational School and will take place between 5.00 p.m. to 8.00 p.m. All members of the community are invited to attend. We especially hope that all of our incoming students will attend with their parents. An adult must accompany all persons under 18 years of age.

Thank you to all who attended the homecoming for our U16 girls last Monday night. It was a wonderful occasion for the school and the wider community. The girls were lead around The Diamond by the Town Community Band and had a Garda escort up to the school. We would like to thank the band leader Darragh Tierney and the committee of the Donegal Town Band most sincerely for coming out on the night and creating such a marvellous sense of occasion for all. The team then arrived to the school where a very large crowd awaited them and they were addressed there by the Town Mayor - Patricia Callaghan, The Chairperson of Donegal ETB - Bernie Mulhern, the Chairperson of the Parents’ Association - Matt Shovlin and sporting celebrity and previous All-Ireland winner himself Joyce Mc Mullin. Music was provided by the Music Department in the school and refreshments were on hand for the evening. Thank you to all who attended and to our invited guests who spoke at the occasion. Thank you also to our many students and parents who attended the event.

Shane Martin presented to a full audience of parents on Monday night last. He gave a most invigorating talk on positive parenting which was hugely engaging and enjoyed by all. Shane Martin is a leading psychologist in the area of education and has visited hundreds of educational institutions nationwide working with management teams, teachers/lecturers, students and parents.

The LCVP interviews were held last week in the school. It was a busy week for the students as they shortly head into mock exams.

The very best of luck to the students who are following the LCA programme as they have a variety of interviews next week in order to assess their practical achievement tasks, general education task and their specialisms.

Art students have begun work on this year’s Texaco Art Competition. The deadline for entries this year is 20th February.

Music students Casey Harvey and Revolutionary performed at the homecoming for the U16 Girls Basketball All-Ireland Victory on Monday 25th January. The music added to the already buzzing atmosphere. The Music Department would like to pass on huge congratulations to the girls for their victory. Music students continue their preparations for their performances on the open night for incoming first year students.

Over the first three days of the mid-term break, there will be a Wall 2 Wall music course in Letterkenny. The course is free and is a great experience for students interested in music to learn new skill and gain new experiences. For more information speak to Mrs Carr or Ms Loughlin.

Over 200 students took part in the Young American workshops over the weekend in the St John Bosco Centre. This climaxed in the highlight of the weekend where the students and the Young Americans performed in two shows on the Sunday afternoon and Sunday evening. The workshops were extraordinary where the students explored every aspect of the performing arts and were fully engaged in the process. The shows themselves were spectacular and no words can describe the amazing talent that these young people in the cast of the Young Americans displayed. Our students shone and were outstanding. We are so proud of you all!

The TY students travelled to Mullingar to perform in the Briary Gap Drama Festival on Wednesday last. This is an All-Ireland TY Drama Competition. The students performed their play, written and directed by their teacher Ms Breda Louge. The students performed very well on the day. We wait to hear the results of the festival to see if the play progresses to the next round of the competition which will be held in Cork.

The schools’ fundraising event, Strictly Come Dancing, will be taking place on the 16th March. Couples have been announced and rehearsals have commenced with dance instructors twice a week after school. Couples are also taking it upon themselves to practice outside of these rehearsals so the show is set to be packed full of talent. The show will take place in the Abbey Hotel and all are welcome.

The Abbey Vocational School is planning a "Oíche Chúltúrtha" in commemoration of the 1916 Easter Rising. All interested in assisting in organisation of the event or any input whatsoever would be muchly appreciated and warmly welcomed.

Leaving Certificate students studying higher level English are attending a 'King Lear' revision session in Letterkenny in the coming weeks. This is part performance and part analysis. As 'King Lear' is their single text, this should prove to be very beneficial for revision prior to their mock examination.

The itinerary for this year’s school to Barcelona is due to be finalised shortly and will then be available for preview on the tour website. Please check the website often for other updates.

Well done to the girls and their coaches Orlagh Regan and Stephen Carty who's hard work undeniably paid off after defeating Cork’s St. Aloysius College to become the All-Ireland Basketball Cup Champions on Monday, 25th January. The game was very exciting, with cracking performances being put in from both sides. The AVS girls were undoubtedly deserved winners with huge performances from the entire squad who all contributed to this win on the day and, of course, MVP of the game and team captain, Eilish McGovern. Homecoming celebrations were hosted in the school when the girls arrived home that evening. Congratulations to our All-Ireland Champions: Anna Campbell, Elaine Wright, Ellie Muldoon, Aine McGroarty, Niamh Histon, Rebecca Caldwell, Jessica Henry, Elizabeth Mackle, Fiona Shovlin, Eilish McGovern, Anna Griffin, Orla Histon, Sophie Carr, Niamh Boyle, Zara McGowan, Amy Lorinyenko and Beibhinn Reid.

The Abbey Vocational School U19 Boys Gaelic team progress into the semi-finals of the Danske Bank Markey Cup after seeing off Ballybay Community College in Garvaghey on Friday last. Congratulations to them and their coach Pauric O’Donnell.

The U19 boys travelled to Cork to partake in the All-Ireland play offs having qualified following their win over Marion College in Dublin. The boys had two excellent games but were extremely unlucky to be beaten narrowly in both. Well done to them and to their coach Jordan Carty, Patrice Rooney and Cormac Oates for travelling with the teams to Cork.

The first year girls and boys teams both travelled to Dungloe on Wednesday to compete in the County Sports-hall Competition alongside seven other schools from around the county including Carrick, Falcarragh and Gweedore. Both teams did extremely well, with the girls placing third overall and the boys fifth.

Training for the hurling team has now commenced and takes place at lunchtime on Wednesday's on the all-weather pitch. If anyone is interested in joining the team please contact Mr O'Neill.

Pictured: Some of the delighted students who welcomed the U16 Girls Basketball All-Ireland Cup Champions back home.