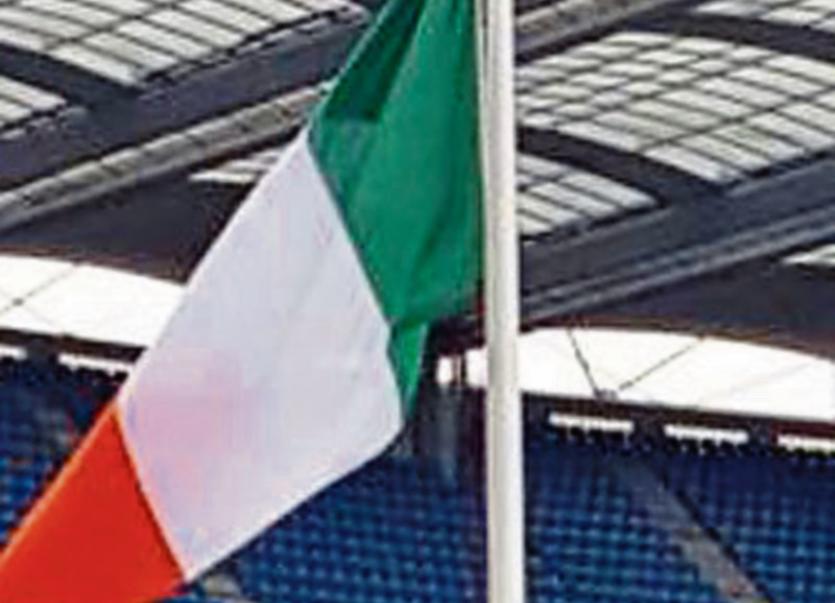 Mr Sylvester Maguire and Ms Caitriona McElwaine represented our school at a special ceremony in Croke Park to celebrate the 1916 Commemoration along with a number of students. James Gillen Sheerin picked up the Irish flag and the Proclamation of the Irish Republic which he will present to Mr Keogh. Students throughout the school are involved in preparations for a whole school celebration to commemorate the hundred year anniversary of the 1916. This will take place on Tuesday the 16th of March which has been designated Proclamation Day for all schools throughout the country. The celebrations will incorporate drama, poetry, art, song, dance and audio visual material. Classes throughout the school have been conducting research and preparing displays of their work which will be showcased on the day.

Congratulations to Mona McSharry on her recent Swimming success. Mona qualified for the European Juniors and European Seniors in 100 metre and 200 metre breaststroke. Mona McSharry continued her impressive form in the Breaststroke events. The 16 year old broke Sycerika McMahon’s 100m Breaststroke Irish junior record and went on to break Grainne Murphy’s 200m Breaststroke junior record in 2:31.29. The Sligo native who swim’s with Ballyshannon Marlins once again went under the qualification time for the European Senior Championships. She also beat the Irish Junior Record, winning gold in the 100 meter breaststroke, 200 metre breaststroke, 50 metre backstroke and in the 200 metre individual medley she won a bronze medal. A huge achievement- we are very proud. We will be wishing Mona every success in the EN European Swimming & Open Water Championships which take place from 16th to 22nd May in London and the European Junior Swimming Championships which take place from 6th to 10th July 2016 in Hungary.

Confessions for Easter will take place in school next Wednesday. All welcome to attend.

Congratulations to Cianan Roper, Junior Cert, who was selected for the FAI U15 Emerging Talent Regional Squad.

We were happy to welcome motivational speakers to our school on 10th March 2016 to give a motivational speech to Leaving Certificate Students. This is a follow up talk after the mock exams. This is part of our pastoral programme where motivational speakers come to the school after the mocks to speak to the students and learn of their progress. This is part on ongoing support for the Leaving Certificate class who have had a number of supports including participation in ‘Beat the Blues Programme’ from Aware, Mentor support, support through our Pastoral Care team in the school and much more.

Students of French and German are working on mock orals at the moment. Good luck to all involved. Students in the French and German Department have really benefitted this year from having a native speakers working with them.

The Transition Years began their Disability Awareness Training on Friday 4th March; they will conclude this training on Friday next 11th March. The training is being run by Mr Richard Alcorn of DCIL. The purpose of the training is to deliver clear and accurate information about disability and to address questions or concerns that employers and employees may have about working with people with disabilities. The training is aimed at providing participants with an understanding and awareness of the issues surrounding disability, including: an overview of relevant anti-discrimination and equal opportunities legislation and general and specific information on disabilities, perceptual awareness exercises and disability etiquette. Thank you to Mr Alcorn; the students really enjoyed the training.

Thank you to the Geography department who travelled to Fermanagh with the Leaving Certificate Class as part of their fieldwork for Leaving Cert. The fieldwork, which is a compulsory part of the Leaving Certificate Geography Syllabus was led by Ms Breslin and Ms Garvey. Students studied the features of erosion in Lough Naman River. After discussing the aims and objectives of the study in the fiend study centre, students divided up into small groups to study the river at 3 different locations. Studies included width, depth, velocity, and sediment size and shape in the upper, middle and lower course of the river. After the investigation students must write a detailed report worth twenty percent of the leaving certificate geography exam. The rain did not interfere with the River Study and the students had a very productive day and enjoyable day.