U20 Girls Gaelic
Our U20 Girls Gaelic team continued their winning form in a match with neighbours Bundoran on Tuesday, November 15th. This makes it two from two with their final group game being played against P.C.C Falcarragh this week at Aodh Rua pitch. A win will see them top the group and go through to the Ulster semi final against Loreto, Cavan.

U16 Girls Gaelic
Our U16 Girls had a comfortable win over Gweedore at home on Monday, November 14th in their second group match, putting them top of the group with one game to play. They now face St. Mary's of Derry in the coming week, hoping for a win which will send them through to the Ulster quarter final stages.

German Debate Team
Well done to the German debate team consisting of Laura Cleary, Edel Foley, Mary Flora Scott and captain Michael John Gillen, who recently overcame the Mercy College Sligo in a very close encounter. They were debating against the motion that Irish young people live healthily and, after very convincing arguments, all through German, they are now into the third round of the competition. Alles Gute!

First Year Futsal
After six weeks, we have reached the final of our inter-class First Year FUTSAL league. 1.2 will face off against 1.5, having defeated 1.3 and 1.4 in the semi-final respectively. Our TY students have been managing the teams throughout the tournament. Kajus Skablauskas, the manager of 1.5, maintains that he has the team in top shape after a tough league campaign. However 1.2's joint managers, Iarlaithe Keegan and Dylan Clancy, reckon they have their team well enough drilled to withstand whatever the opposition throw at them. It should be an enthralling end to the Futsal league in which there has been some excellent football played.

First Year Business Students visit AIB
First Year Business students visited the local AIB branch in Ballyshannon as part of their Junior Cycle course. They got to see how the bank runs behind the scenes, where the safes are located and how the lodgement machines work. They also learned about the advantages for businesses in using online banking. They then emailed reports of their visit to the bank, improving their communication and IT skills.

TY Build A Bank
TY students that are involved in the Build a Bank Challenge have a big week ahead as they open for business for the first time this Thursday. They have had regular meetings with their mentor Darragh to discuss their plans and are filling in their business plans for competing in March while coming up with ideas on how best to promote their Hogwarts Bank.

Christmas Fair - December 9th
Transition Year students are busy organising a TY Christmas Fair which will take place on Friday, December 9th (not Wednesday, Dec. 7th, as previously advertised). A range of products produced by TY students will be available - Christmas bobbles and logs, crafts, cakes, muffins, buns, brownies and cookies to name but a few. Other local producers will also be invited to participate. Coláiste Cholmcille students will have an opportunity to visit the fair in the morning, with primary schools invited in the early afternoon, and parents later in the day. This is the first time that such a large-scale project has been developed by the TY Enterprise team, and we wish them the best of luck!

Donegal SPCA Visit
As part of their CSPE Action Project, Classes 3.2 and 3.3 organised a visit from a representative of the Donegal SPCA. Jetta from 'Make Your Dog Smile' came in to talk to the students about responsible animal ownership. The students learned a great deal about owning a pet and the level of responsibility and commitment involved. 3.3 reached out to the very generous first year students to bring in donations for the animals of the Donegal SPCA and were delighted to be able to present Jetta with a box of pet food, treats and toys for the animals. 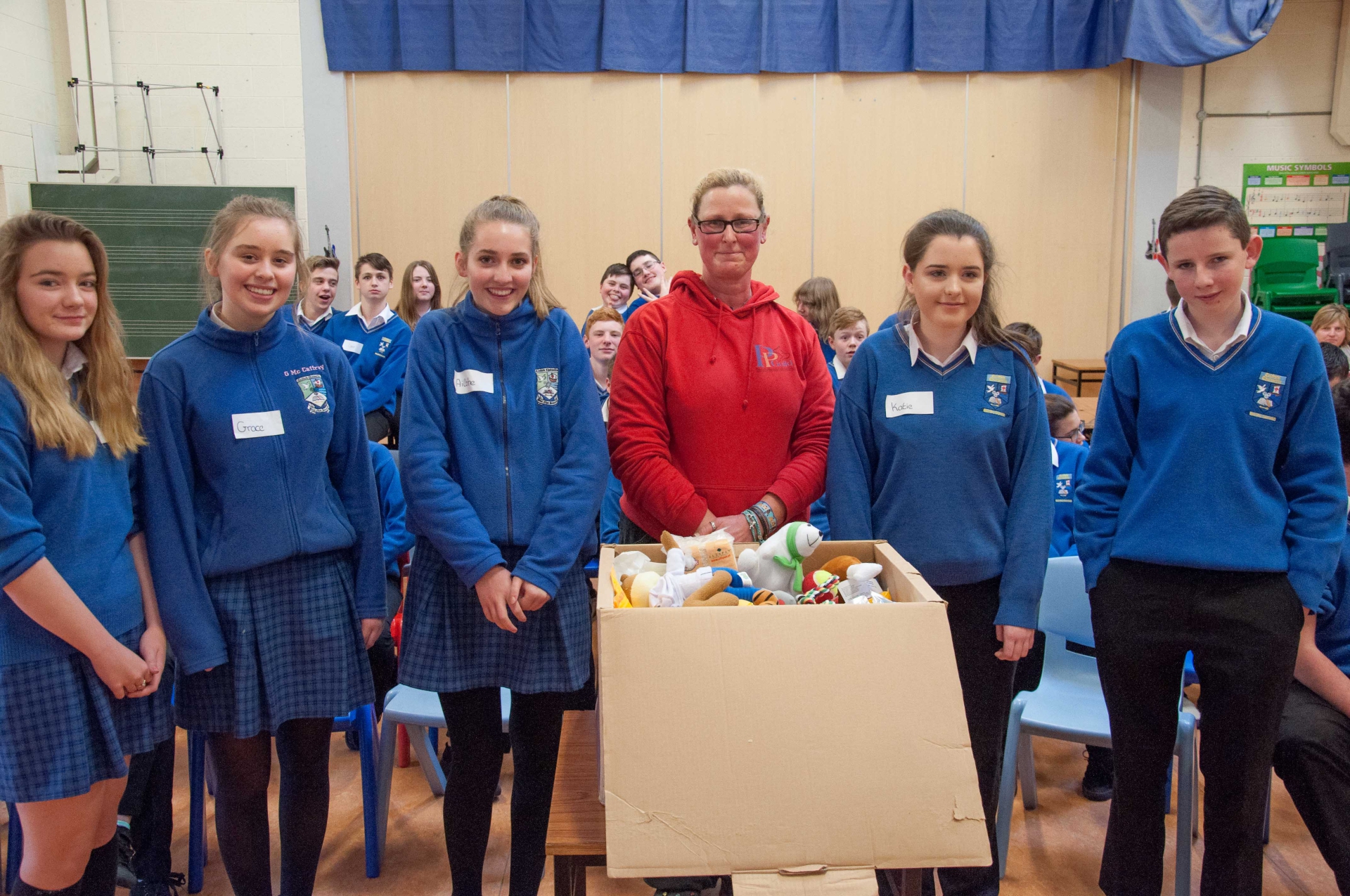 Third Year Study Skills
First and Third Year students took part in a Study Skills seminar with Gareth Gibson of the Donegal Youth Service this week. This was a very valuable workshop for all. First Years face Christmas exams for the first time, and Third Years are preparing for their Junior Cert. This can cause anxiety for some students. In the workshop, students learned the importance of time management and some simple study techniques.

CAO Talk
Sligo IT and Letterkenny IT joined the Guidance Department to deliver a very successful information session on getting to and surivivng third level.

Congrats Seamie
Seamie Keogh returned to Coláiste Cholmcille on Monday, having spent last week in Poland with the Republic of Ireland U15 Boys soccer team. The young boys in green drew in their first international against Poland in Lomza on Tuesday, but were beaten 2-1 in the second game on Thursday. The Irish head coach said, "“We were really happy with the players. They showed great improvement from Tuesday and were very confident in possession. They showed no nerves and had Poland on the back foot for the majority of the game. The Polish coach was very complimentary about our performance afterwards." Well done, Seamie, and we look forward to seeing you don the green jersey again in the future!

TY Drama at the Balor Arts Centre
TY1 and TY3 took part in the annual Donegal Youth Theatre Competition in the Balor Arts Centre last week. TY1 produced an adaptation of Marina Carr's 'Bog of Cats', and TY3 presented a comedy entitled 'Check Please'. The competition was won by Errigal College with 'Speak My Child'. TY3 came second and TY1 came third. A number of students received certificates and trophies for their performances and work in the production. Roisin Gallagher, Andrea McGlynn and Fiona Gillespie received trophies for their performances, and Hilary Francis and Eimear Gilroy received certificates. The stage crew and the technical crew from 'The Bog of Cats' also received certificates on the night. The competition provides a great opportunity for young aspiring actors to tread the boards in a wonderful theatre. Thanks to all in the Butt Drama Circle for continuing to run the competition.