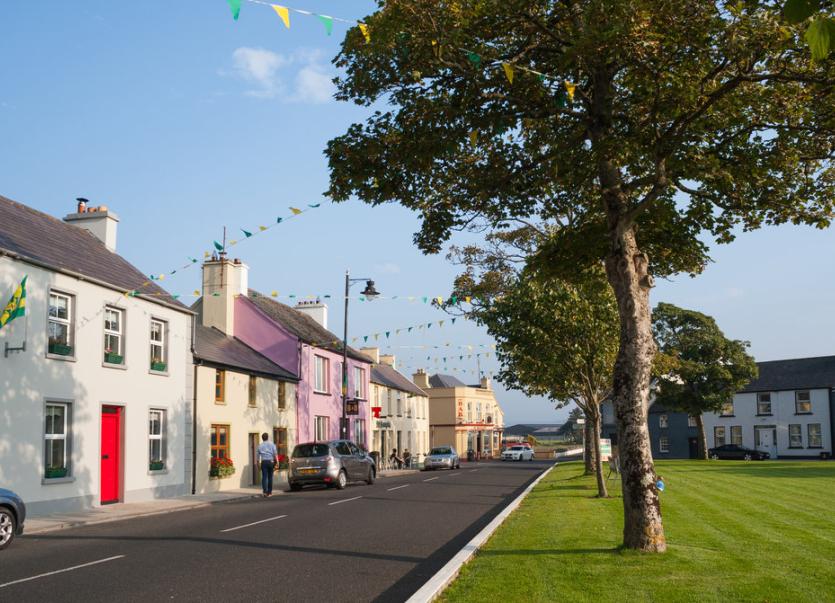 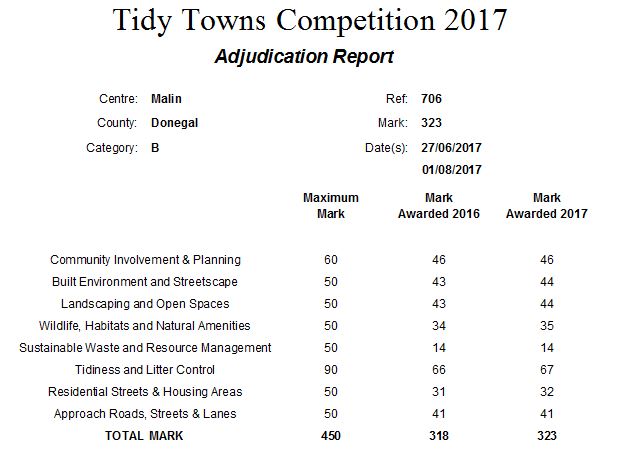 Malin, a former national winner, increased its overall mark by five this year. Here's the full report from the judges:

Community Involvement & Planning / Rannpháirtíocht an Phobail & Pleanáil:
It is a pleasure to welcome Malin to this year’s Tidy Towns Competition. We note what you say about participating
for over half a century. That surely is a commendable record of community effort and be assured that we saw plenty
of signs of the great benefits when we visited the place this time. It is evident that being (probably) the most
northerly entry has not held you back in any way and it is probable that the reverse might be the truth!

Your application is carefully set out and we admired the neat handwritten notes and observations. The map proved
to be concise, informative and to the point. We note that Malin is entered in the category of large villages and that
you have ten committee members who receive help from a further fifteen volunteers. That is a great rate of
participation in a village, again reflecting the community dimension. Well done to those concerned.
Built Environment and Streetscape / An Timpeallacht Thógtha agus Sráid-dreacha:
There are some aspects of Malin that make a strong early impression. It makes great use of its coastal situation and
the approaches are enhanced by features such as the ten arch bridge. Closer in, there is the surprise of the
triangular green, one of the finest in Ireland. Over the years you have managed these resource well, keeping a good
balance between the needs of development and the needs of heritage/conservation. It is, ultimately, that fine
balance you have achieved that explains the exceptional appeal of Malin to visitors.

Overall, we found an uplift in the built environment, and this was certainly to be seen around the green. There was
fresh white paint on the kerb there. At the Post Office we came across two men renewing the ornate timber
surround of the shopfront. Next door, there was renewal also going on. St Patrick’s Hall and car park were looking
well. Buildings associated with community purposes looked well. These included the HSE centre and Scoil Treasa
Naofa (where we saw bright roadside trees). The GAA grounds are well cared for. They looked better than on our
previous visit.

The parochial hall (and the information panels) obviously receive attention.
Business premises that we commended included the Izuzu garage, McClean’s (nice traditional frontage).
Landscaping and Open Spaces / Tírdhreachú agus Spásanna Oscailte:
At the Trawbreega Bay car park we saw the 1916 centenary trees (and the associated plaque). It was a pity to find
that one of the seven trees is already missing but we’re confident that it can be replaced. The surfacing of the car
park itself remains rather uneven. That will certainly act as a traffic calming device.

In several places we admired roadside features such as the robust gate piers that were stone-built and topped with
a pyramid.

At the green, the trees looked well-managed. Roadside honeysuckle was admired in several places. That will
enhance your pollinator initiative. Seats at the Trawbreega Bay car park helped us to take in the views. They have a
fine rustic appearance.
Wildlife, Habitats and Natural Amenities / Fiadhúlra, Gnáthóga agus Taitneamhachtaí Nádúrtha:
Malin makes great use of the natural habitat on its doorstep. The bird hides are proof of that, as are the access
ways allowing people to get closer to the wildlife. So too are the bird boxes, such as those at the village green. We
saw swallows dipping low over the village green. At the old divers depot, near Brookfield, they were entering under
the top of the roller shutter door, flying vertically and reminding us of circus trapeze artists.

During our visit the tide was out and we watched a heron standing still in the river, just waiting to pounce on some
passing fish. We read with interest your report of a kingfisher seen beside Brookfield. We were likewise delighted to
hear your report on the local choughs. Your support for local bats is commendable and the educational talks will
help people to understand their role in the ecosystem.

Your community garden (and bug hotel) can, no doubt play a part in that.
Sustainable Waste and Resource Management / Bainistiú Acmhainní agus Dramhaíola Inbhuanaithe:
Your recycling facility is well managed. At the river beside the HSE centre we were disappointed to find a substantial
amount of cut grass dumped beside the water. This would be better disposed of through composting.

You can bear in mind the waste hierarchy that is graphically illustrated as an inverted pyramid model. It begins with
Prevention - if you can’t Prevent, then Prepare to Reuse. If you can’t Prepare To Reuse, then Recycle. If you can’t
Recycle then Recover Other Value (e.g. energy). Ultimately, if you cannot Recover Value, then Disposal. Landfill
should only arise where no other alternative is available.
Tidiness and Litter Control / Slachtmhaireacht agus Rialú Bruscair:
This certainly is a category that allows Malin to shine. Your housekeeping has reached a very high standard. A
notable feature of the village is the extensive network of white washed edges, extending over walls and kerbs. They
really brighten up the place. It could, in the wrong hands, also highlight litter or dirt. Now with you, however, it is the
opposite. This reveals how clean you have made the place. Well done.

At the landmark entrances to Malin we were impressed by the high standard reached in keeping them looking so
well. That comment certainly applies to the surround of the ten arch bridge and the Trawbreega Bay car park. The
Glengad road looked well maintained. The public toilet was very clean and the picnic area beside the bridge was
spotless.
A notable improvement was seen at both bird hides. They were way tidier than the last time that we visited them.
Residential Streets & Housing Areas / Sráideanna Cónaithe & Ceantair Tithíochta:
Malin is amongst those places where it is possible to observe an uplift in the residential sector. Cois na hAbhann
estate is much improved since the last visit by this adjudicator although some kerbside weeds remain. Drumcarbit
Mews impressed us with the great views provided for some of the houses there. It is well presented too. Housing
alongside the GAA grounds was bright and smart.

Radharc na Trá Bréige is a mixed development where some houses would benefit from closer attention. The
thatched cottage on the Glengad road looked very well. Carraig Ard, the stone-faced building, was well presented
too. At Connolly House, we found the external area well managed.
Approach Roads, Streets & Lanes / Bóithre Isteach, Sráideanna & Lánaí:
Malin gives visitors a great welcome. There was a constant stream of vehicles coming and going during our visit but
the traffic moved freely. That level of traffic might present a challenge from discarded litter but we found the streets
very well kept.

We noticed the lovely stone boulders bearing the Malin name. The Culdaff approach allows marvelous view of the
ten arch bridge. This is complemented by the roadside planting of bright flowers. On the Glengad road we admired
the well-kept signs and the place was weed-free. The new footpath at the Malin Head road was commended also.
Well done.

Second Round Adjudication:
This adjudicator was pleased to have the opportunity to carry out the second-round adjudication on Malin. On arrival
from Carndonagh the scene is set by the layby and picnic area before the long bridge is crossed. Your map
describes it as an information area, and so it is. The information panels are very informative. Crossing the long
bridge, one arrives into the village at the green which is an attractive well maintained triangular area of pristine
grass. The green is raised with a high kerb which prevents parking. The kerb is painted white. Mature trees and
seats form a border around the grass area. The 3 apexes of the triangle are used to convey more information, all 3
with flowers, one of which has a plaque telling us that Malin was the National Tidy Towns Winner in 1991.
The first adjudicator has described the buildings around the green and elsewhere in the village and on the
approaches. Judging by the presentation of properties around the green, on approach roads and in the new
residential estates there is a high level of community spirit in the village. All of the householders, business people
and landowners in Malin want their village to be seen at its best and they take appropriate action. Well done to all
involved. Your village looked at its very best.
This community spirit takes on a physical form in the neat and tidy community garden and its equally well-presented
community centre. You have natural attractions such as a great variety of birds and you share these attractions by
providing excellent bird hides for locals and visitors. There are distinct differences between the older residences and
the new ones and each makes its contribution. The well-presented school will get a new lease of life and Malin Tidy
Towns will get new members and volunteers. The local authority is also making its contribution with good road
surfaces, new footpaths and other improvements.