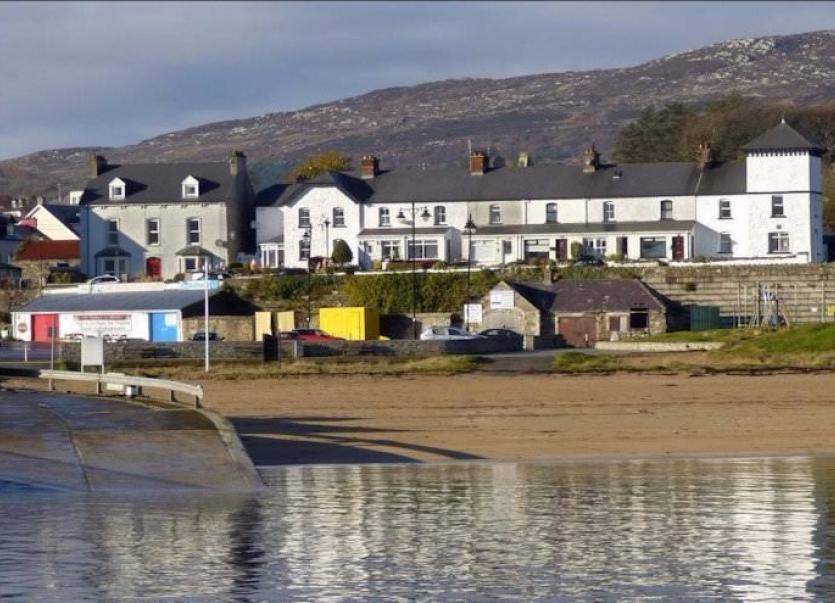 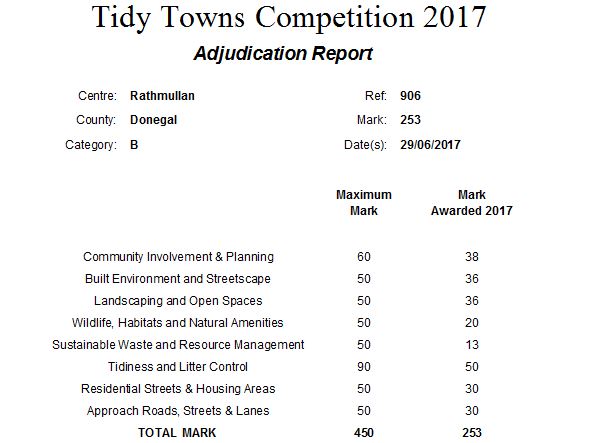 The judges were glad to see Rathmullan back in the competition. This is their full report:

It is great to see Rathmullan back in the Tidy Towns Competition this year. Since your last entry there was plenty for us to see that proved you have made considerable progress. Your population is given at 540 and your entry is in the category of villages. We note from your 2012 yearbook that that was the year you began to undertake the new

initiatives. It is great to read that your committee has eleven members, who receive, in turn, support from twenty
other volunteers. Further to that, you mention a group of over forty helpers who are drawn from various local
organisations. That is an impressive body of active workers all pulling together.

We thank you for the fine hand-drawn map showing us the location of your project sites and schemes. Go n-éirí an
t-ádh libh sna blianta atá romhaibh.
Built Environment and Streetscape / An Timpeallacht Thógtha agus Sráid-dreacha:
The topography of Rathmullan adds interest to the individual buildings and to their settings, all reflected in the ups
and downs, as well as its turns, its nooks and its crannies. A heritage walk might assist you in introducing visitors to
the various churches and older buildings.

St Joseph’s church commands a fine view. The Presbyterian church is set off well by the finely kept grounds, with
lovely gate piers. The Church of Ireland also made a good impression and the near way leading up to it is really
attractive.

We really admired the old boathouse that faces the seaside car park. Its rich architectural features mark it out. We
wondered whether you have considered the possibility of a renewal/restoration project there.

Premises that were well-presented included the pharmacy, An Bonnán Buí, Big Paddy’s, Patrick Patton’s, The
Market Fruit & Veg. The Looking Glass caught our eye and the Tanyard building is really eye-catching, also
enjoying a spectacular location.

The Oznan development is an admirable local amenity.
Landscaping and Open Spaces / Tírdhreachú agus Spásanna Oscailte:
We found the seaside playground very busy. It was great to see so many youngsters testing your wide variety of
swings, the roundabout and other attractions. We admired the fine stand of yew trees opposite the graveyard at St
Joseph’s. The little park with the mega Cup and the bridge proved novel.

We were very impressed by the memorial commemorating the Flight of the Earls (1607). John Behan’s sculpture
group is really evocative of that sad chapter in Irish history. The associated panel tells us much of the story behind
the event. We did notice the square blue building standing between the memorial and the sea
(coastguard hut?). We strongly advise that it be repositioned, so that the connection between the memorial and the
sea is left unhindered. It deserves an open marine aspect.

The open area contains several fine lamp standards but they are randomly scattered rather than lighting the
footpath. You might request the Council to rationalize the lighting layout, again to avoid intruding on the historic
free-standing memorial that deserves to be kept unhindered as the centerpiece.
Wildlife, Habitats and Natural Amenities / Fiadhúlra, Gnáthóga agus Taitneamhachtaí Nádúrtha:
Your variety of habitats was reflected in the number of different birds we saw. We noticed a flock of house martins
darting about over the graveyard. Nearby, we sat and watched a murmuration of starlings, one of nature’s best
novelties. At another point, we listened to the raucous flock of crows. This diversity set us thinking whether you
might follow up on the bird identification exercise you held last February with Bird Watch Ireland, say by inviting
local school children to carry out a project/study, to identify how may bird species are to be seen in Rathmullan, in
which habitats and at what time of the year.
Sustainable Waste and Resource Management / Bainistiú Acmhainní agus Dramhaíola Inbhuanaithe:
Rathmullan certainly benefits from projects such as the Resource Centre and the charity shop (St V de P.) That
charity shop is an ideal means of recycling articles locally while raising useful funds for a great cause.

We note your initiative with the local school children, telling them about the latest approach to resource
management. Your project promoting the re-use of school materials for art work is commended, as is the effort to
reduce the amount of photocopying. You are correct in pinpointing the challenge presented by paper and food
waste. Well done.
Tidiness and Litter Control / Slachtmhaireacht agus Rialú Bruscair:
This is a category which you have now approached very earnestly. The good work undertaken by yourselves, by the
local volunteers and also by the Council is highly commended.

There are a few points you might consider now. The litter bin near the 1607 memorial was overflowing on
adjudication day. You may also consider whether there is some advertising clutter opposite the public space that
contains the mega Cup of Tea.
Residential Streets & Housing Areas / Sráideanna Cónaithe & Ceantair Tithíochta:
Rathmullan contains a fine variety of houses - new, old, terraced and individual. we were entertained and intrigued
reading the background history provided about the Big Houses of the area, including Rathmullan House, Fort Royal
and Drumhalla House. We found that Rathmullan House has a restrained and dignified entrance.

Maoilin Park was well presented. The coastguard houses are finely maintained and congratulations on the stone
planters.
The old cottage opposite St Joseph’s graveyard is a real gem.
Approach Roads, Streets & Lanes / Bóithre Isteach, Sráideanna & Lánaí:
Rathmullan benefits greatly from the setting, with the seashore in the foreground and the green mountains in the
background. We look forward to a return visit in the near future. Well done to all concerned.