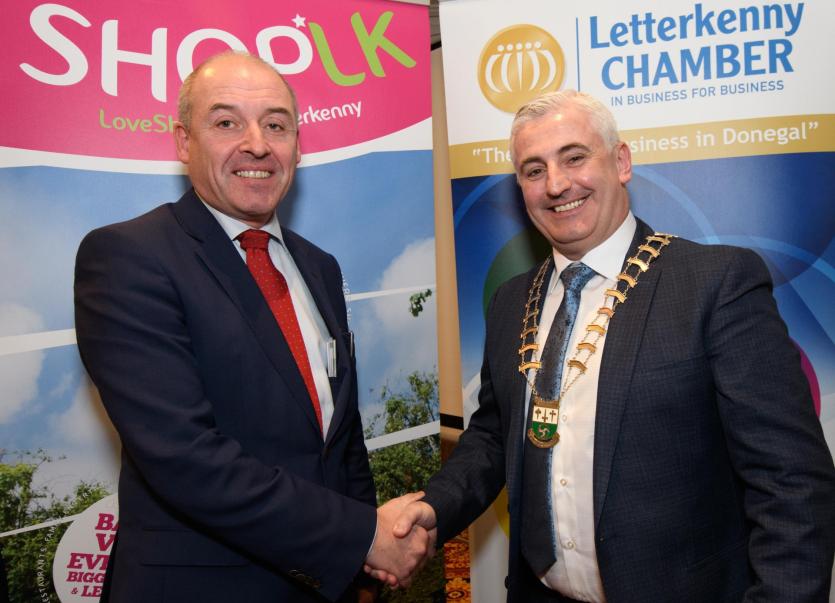 A well known Letterkenny business man has been elected by the Letterkenny Chamber of Commerce to the position of president.
Leonard Watson of Watson Menswear was recently elected to the position at the annual general meeting of the Letterkenny Chamber of Commerce which was held in Dillon's hotel in Letterkenny this week.
Letterkenny Chamber’s outgoing President, Gerard McCormick, handed over the presidential chain to incoming President Leonard Watson at the event.
Leonard has been an active member of the Chamber since opening his business 5 years ago and has served on the Chamber Council since 2014.
Leonard is well known in the Letterkenny business community and on taking over the role he said he was very much looking forward to representing the business community and Chamber members in 2017.
He said: “It is an honour to be nominated and elected as Chamber President by my colleagues in the Chamber Council.”
He added that over the last number of years he has worked with the chamber in formulating a strategy that would be beneficial to the future of the chamber.
“I have over the last few years tried to play my part in shaping the strategy and future of the Chamber,” he said.
Many tributes were paid to the outgoing Mr Gerard McCormick for his hard work and dedication over the past year.
Leonard hopes to emulate the hard work of former presidents.
“Last year a lot of work was done in terms of improving our communications and our engagement with members. We are proud to represent members and as President I will be reaching out to the members to get even more involved.”
The Chamber also elected a new Chamber Council which consists of members from a wide variety of business sectors, who meet on a monthly basis and steer policies, activities and initiatives of the chamber.