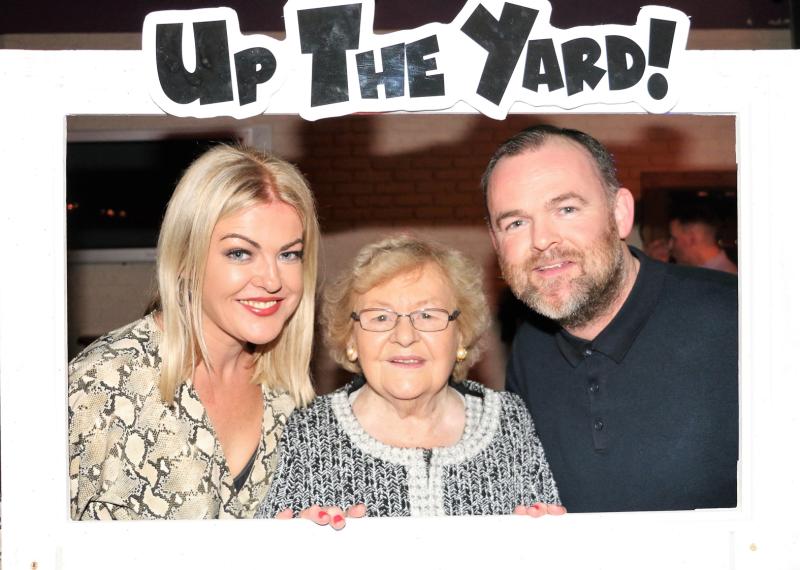 The lady herself Mary McNelis the perfect host atthe Millstone Hotel along with her grand daughter Aoife and grandson Herman at the packed reunion in Dicey Reilly's. Picture Matt Britton

Aodh Ruadh ran a very good  quiz in Dicey Reilly's over the festive period with 19 tables competing. Paddy Kelly from Roscommon set the questions and to his credit kept the Roscommon questions to a minimum! Sylvester was quizmaster and there was great help from Catherine McKee, David McLoone and an army of willing ticket sellers. A team of Fergusons eventually won after a double tie-breaker round with a McLoone contingent, there were great prizes and a great way to meet up after the Christmas. Tom Daly thanked all at the end for their support.

On Saturday night Aodh Ruadh again were behind another brilliant night when they ran a Millstone Reunion. They had Hugh John Patton back on the door and Herman McNelis, looking great, was back to spin the discs (well there may have been a lap-top somewhere on the deck too). Unlike his father, who used a telephone to cue up the records, Herman had headphones for the 2018 version. All in all a great night too, with Mary McNelis, at 94, the centre of attention with people coming up to say hello to her and renew old friendships. Also good to see another former owner of the hotel, Eamon McNulty there as well.

Elsewhere in the town there were many big nights, the quiz organised  by Anthony and Olive Travers for their India project was a huge success while a poker classic for Aodh Ruadh, organised by the man who once “scraped the sky” to win a ball for De La Salle, Michael Melly, was another great night.

Earlier in the festivities the Christmas Swim at Creevy was an incredible success too, massive numbers getting into the water this year and lots of money raised for three great causes, Irish Heart Foundation, MS and North West Hospice. Possibly one of the most memorable nights of all came in St Anne’s Church where all were warmly welcomed by Rev Brian Russell for a Christmas Community Carol Service. The Church, beautifully lit and decorated for Christmas, was packed and the singing from the pews was truly memorable and evocative. Mixed with readings by all sections of the community, funds from a collection taken up went to the local Conference of St Vincent de Paul, North West Hospice, Rock Home Comfort Fund and the Sheil Hospital Comfort Fund. It was lovely to see so many home for Christmas and the New Year and more than a few people commented that they were hugely impressed with the Christmas lights in the town this year. Possibly the most impressive view of the lights was coming down the Bank Brae at the Old Post Office corner, where you could see lights of all types and lots of other ornamentation. Great credit to the Business Chamber and their members who are the driving force behind our lights in town each year.

We are back playing Whist at Askill Community Centre on Sunday 6th of January at 8pm, supper server, All are welcome.

The Committee of Askill Community Centre wishes All our Whist players a very happy and healthy New Year.

Bingo as usual this Friday at 9pm in the Abbey Centre. We wish to thank all our bingo goers for their continued support throughout the year and wish all a very happy and prosperous - with some bingo fortune! - New Year!

Tickets are now available in the following outlets: Seán Óg's, O'Donnell's, Dicey Reilly's, The Limit, Pat's Bar, The Bridgend, Owen Roe's, Fin McCool's, The Lantern, McGinley's, Pearse O'Neill's, McCosker's Centra and Kernan's Spar and at the weekly bingo in the Abbey Centre. You have to be in it to win it! The lotto team for McCosker’s Centra on Saturday is: Juvenile Hurlers.

Well done to Nathan Boyle on being nominated in the GAA category for the Donegal Sports Stars. Well done also to Andrea McGlynn who earned a nomination in the basketball category, as well as to Maeve Liston who picked up a nomination in rugby.