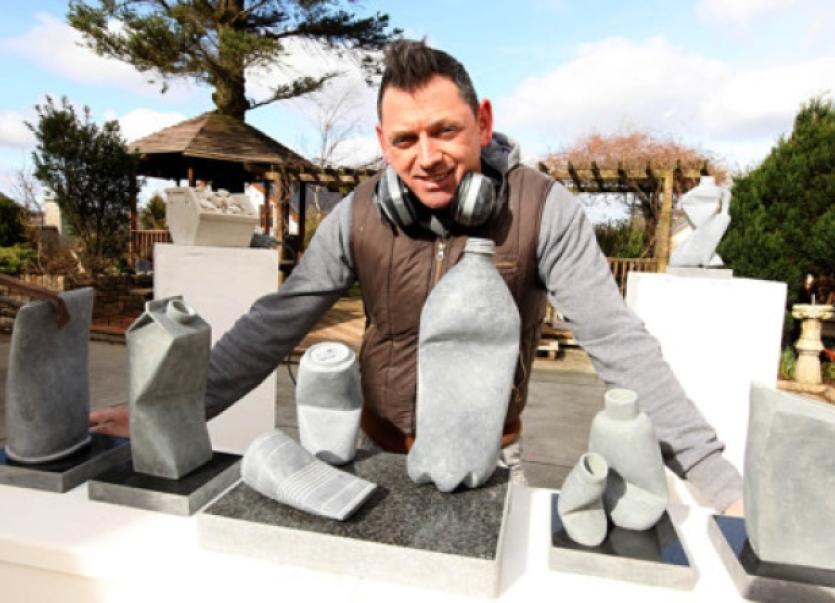 It has been a busy spring for Letterkenny sculptor Redmond Herrity, with his new work finding audiences at home and abroad.

It has been a busy spring for Letterkenny sculptor Redmond Herrity, with his new work finding audiences at home and abroad.

For the past four months, Redmond has been working on a new series he calls, “Recycled Limestone”. Working with Kilkenny limestone, Redmond has created a remarkable series of recyclables, including a dented beer tin, a crumpled plastic cider bottle, a folded milk carton and a bent plastic container for a baby’s beverage.

“I’m thinking along the lines of thousands of years gone past when people carved gods, and that’s the drift now of what’s there before us because that’s the only message left in stone,” he said. “It’s ancient.

“What I’m doing now with the recycled items is that I’m going to show in 1000 years’ time what products we used,” he said. The series also raises questions about society’s relationship to these items.

More than that, the anthropomorphic shapes of the pieces Redmond has created give them something of a sense of humanity. When one is positioned against another on a granite plinth, they appear to engage with each other, as though the plastic bottle is leaning down to hear what the tin has to say. They also pose the question about what our recycled rubbish can say about us.

“These have human form in them,” Redmond said.

Last month, Redmond sent a collection of the “Recycled” pieces to the Artcatto Gallery in Loule, Algarve, Portugal, where his work will be on permanent exhibit.

Closer to home, Redmond will have a month-long exhibition of other works at Ballymaloe Country House, Shanagarry, Midleton, County Cork, starting on June 14th.

And closer still, Redmond is donating a piece from the Recycled series that will be raffled off as first prize in a draw at a June 19th mid-summer vintage tea party for Mary’s Meals.

Over the coming months, his work will also be shown at the upcoming Royal Hibernian Academy (RHA) show in Dublin, the Royal Ulster Academy show in Belfast, the Kilkenny Arts Festival and Dublin’s Botanic Garden.

The new series has been attracting a lot of attention.

“People who aren’t even into art are getting it instantly, which think is a good thing,” Redmond said. “It’s hitting on all keys.”