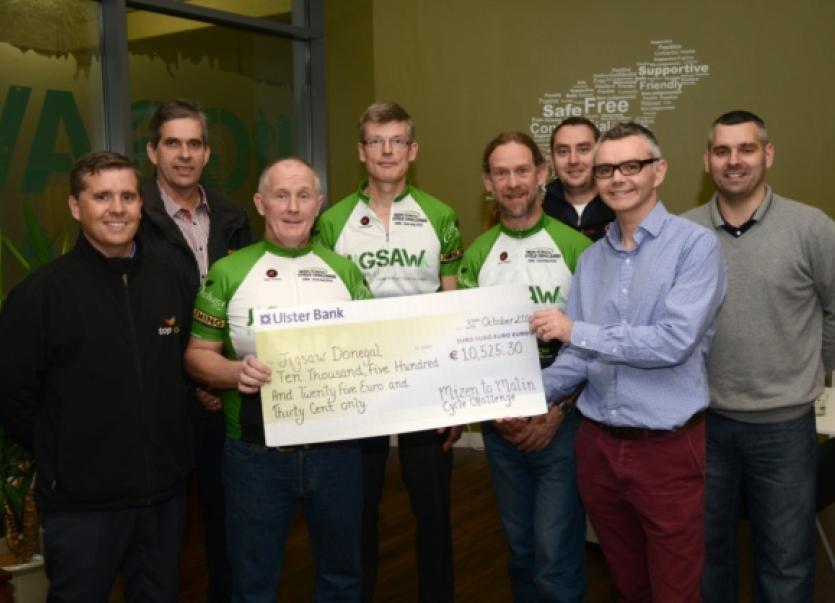 A charity cycle from Mizen to Malin has raised €10,525.30 for Jigsaw Donegal, a mental health charity which helps young people.

A charity cycle from Mizen to Malin has raised €10,525.30 for Jigsaw Donegal, a mental health charity which helps young people.

On Thursday, August 28, a group of eight cyclists set out on a 677 km journey over four days from Mizen Head and back to Malin Head in Donegal, Ireland’s most northerly point.

Their mission was not only to complete their biggest challenge to date but also to raise money in the process for Jigsaw Donegal.

Robert thanked them and all those who helped make the event such a success especially the main contributors: Fleming Agri-Products, New Buildings Derry; Pepsico Ireland; Top Oil Ireland and The Old Orchard Inn.

He also thanked Liam Doherty, Sean Doherty Fruit and Veg; John Margy and Adrian Doherty from Right Price Cars; all those who donated spot prizes, made donations or helped in any way, his wife Linda, the other cyclists and driver Kyle Toner.

Jigsaw Donegal helps young people with mental health needs. More than 555 have been referred to the 1-to-1 services along in the last two years.

Sean McGrory Project Manager, Jigsaw Donegal said “I would sincerely like to thank Robert and his team for their amazing efforts. Their efforts help to ensure that when young people in Donegal are struggling, we are there to give them the support they need, when and where they need it’.

For more information on Jigsaw Donegal, or if you wish to fundraise on behalf of Jigsaw Donegal. please visit www.jigsaw.ie/donegal or