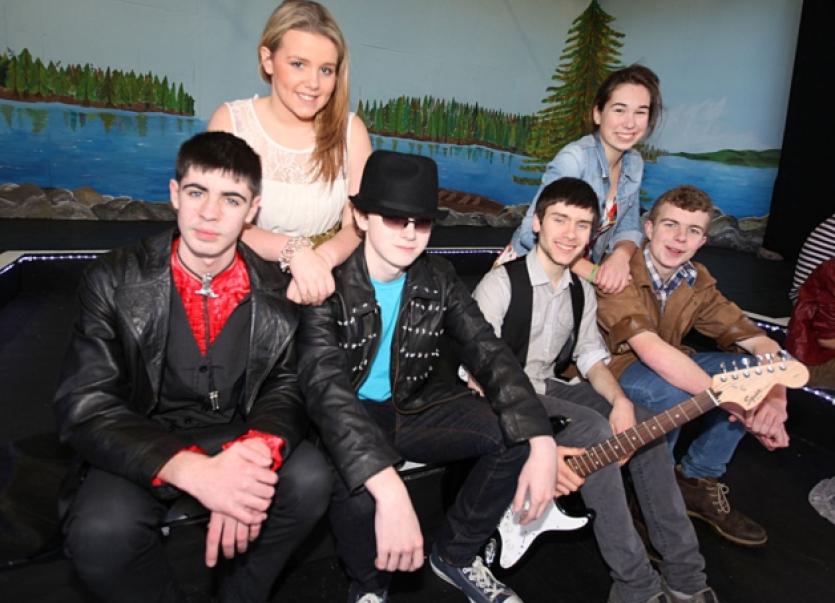 We would like to extend our heartfelt sympathy to the Lipsett and Martin family at this difficult time, assuring them that they are with us in our thoughts and prayers.

Congratulations are extended to Bryan Feighney on his success in the Leaving Certificate Engineering Examination. Bryan was awarded the Best Male results in Engineering in the country in his Leaving Certificate. This encompassed a Design and Manufacturing project, Practical skills, six hour bench fitting test and a theory/ written examination in June. Bryan was presented with his award on Saturday 16th November at the National Engineering Technology Teachers Association Conference which was held in Monaghan over the weekend. Bryan is now pursuing a career in Engineering in NUIG and the school wishes him every success in his future career. Congratulations are also extended to his Engineering teacher Mr John Kennedy who was also in attendance over the weekend. Well done to both.

Congratulations to all our Transition Year students who took part in the annual Donegal Youth Theatre Festival in Ballybofey this week. Groups from all three TY classes performed on Tuesday night in the Balor Arts Centre on the opening night of the festival, run by the Butt Drama Circle. The awards ceremony took place on Thursday night, and all three groups came home with a number of prizes. Rhiannon Kerrigan and Eva Mc Mullin both won Certificates for Character Acting. The cast of ‘Remember December’ received a cert for Ensemble Acting, and Ruairi Brady received a special Cert for his performance as Gerry. Michael O’Moore and Darragh Oldham shared an award for Best Comic Duo. ‘The Morning After’ received the trophy for Best Original Script, as well as the trophy for Second Overall, and received the cup for Best Presentation of the festival. Miss Garvey’s class produced a comical piece called ‘The Bride of Dracula’, starring Aaron Clarke as the loveless Count Dracula and Rhiannon Kerrigan as his long-suffering mother. Eva Mc Mullin, Jennifer Armstrong and Shauna Campbell played Dracula’s love interests, with Sarah Timoney and Daniel Britton playing Shauna’s disapproving parents. Miss Kuehl’s class presented a more mature play entitled ‘Remember December’, in which two old flames meet up after many years. Ruairi Brady played Gerry, with Rossa Mc Cosker voicing his private thoughts, and Megan Mc Cann played Margaret, with Chelsea Gilroy playing the private Margaret. Mr Beattie’s play, ‘The Morning After’, involved a love triangle,a devious femme fatale and a night out. It starred the ensemble cast of Darragh Oldham, Michael O’Moore, Leonie Hill, Laoise O’Connor, Matthew Cleary, Ayeisha Mc Laughlin and Daire Doyle. Well done to all involved, and lets not forget the technical and backstage crew for the three shows: Aoibhinn Mc Guckin, Zoe Lawlor, Mollie Slevin, Johnathan O’Brien, Dillon McGloin, Ceolan Mc Mullin and Ciarde Sheerin, Martin Mc Manus and Matthew O’Connor. Thanks to the Art and Woodwork Departments for their assistance with sets and props.

Rehearsals are in the final stages and the students participating in Camp Rock were involved in a flash mob at break time last Thursday so the Camp Rock Fever is building in the school. The stage is set for what promises to be a fantastic show.

Tickets are on sale in the school at the moment for the Musical Camp Rock. Tickets are on sale now in Colaíste Cholmcille from Monday to Friday from 11.00-11.15 am and 12.15 to 1.30pm; every Tuesday, Wednesday from 8.00-10.00pm and Sunday from 4.00-7.00pm. The Musical, based on the hit Disney Channel Original Movies Camp Rock and Camp Rock 2: The show has been produced by Mrs Geraldine Diver, directed by Maura Logue, musically directed by Ms Niamh Currid and choreographed by Ms Julianne Murphy. This Musical is set to fire up the stage with over a dozen songs, including “This Is Me”, “Can’t Back Down”, “It’s On” and “We Rock.” A classic story of rivalry and power! Mitchie (Aoibhinn Gallagher) and her friends (Kevin Kennedy) arrive at Camp Rock, ready to spend another summer jamming out and having the time of their lives. But the new, flashy Camp Star across the lake now threatens Camp Rock’s very existence. To keep the doors open, Mitchie steps up, rallies her fellow Camp Rockers, and gets them into top shape for the ultimate showdown! A high energy show full of singers, actors and dancers and a must see for all the family! Good luck to all involved.

On Friday last, Mrs Mairin Harkin visited second year students in Colaiste Cholmcille, Ballyshannon to discuss her work as an MEP in Europe. She complimented the school for promoting an interest in the EU. Mrs Harkin began by outlining the history of Europe and its effect on the ordinary people of Ireland. She went on to speak about her work in Europe and then she opened the debate to the floor. Questions included issues such as her life in politics, the impact of her political life on her personal life, campaigning for election, the issues and campaigns facing farmers and fishermen in Ireland and the possible European response to a war crisis in Syria.

Good luck to Kevin Kennedy, Michael O’Moore, Aaron Britton and Darragh Oldham in the Concern debates the next round of which will take place in a fortnight against Elphin. The Concern Debates aim to promote a deeper awareness and understanding of global issues, to provide students with a public forum, to develop skills in research, presentation and debate and to encourage students and teachers to become lifelong advocates on issues relating to poverty, justice and human rights. The debate will take place in Colàiste Cholmcille and all are welcome to attend. Thank you to Ms Anne Marie Garvey for her untiring work in this regard.

First and Second Year Girls are encouraged to become involved in Girls Active which is taking place in The Mercy Hall on Wednesdays at 12.30 pm . Research suggests that physical activity is an effective tool for reducing the symptoms of stress and depression among girls. Physical activity is anything that requires movement of your body and increases heart rate. Working out on a regular basis (at least three days a week) will make you strong, increase energy and flexibility and turn you into a physically active person.

A video of Amy Gillen performing in the inaugural CCBS Lunchtime Recital is available on the school youtube channel. Amy performs three pieces: ‘Feux d’Artifices’ by Debussy, ‘Cadenza from Piano Concerto in A Minor’ by Grieg, and ‘Rigoletto Paraphrase’ by Liszt. Amy’s performance has to be seen to be believed!The next performance will take place on Wednesday by Jessi Govern.

Dublin poet Colm Keegan visited the school on Friday Nov. 8th to read some of his poems to Transition Years and to hold a workshop on writing poetry. 20 students attended the workshop, where they developed their own poems and read them aloud to the group. The reading and workshop was organised by the Allingham Arts Festival.

The Irish Oral Course for Leaving Cert took place on Monday 18th November and it was a real success. The course took place in the local Primary School and was facilitated by Ms Corcoran, Ms Gallagher and Ms Mc Elwaine. Well done to all involved.

Under Sixteen Girls Football took place on Monday, 18th November. Unfortunately the girls were not successful on this occasion.