Traffic delays in the area as emergency services attend fire

Fire services this evening attended the scene of a major blaze in the Kiltoy area of Letterkenny.

This drone footage capturing the blaze was posted on social media this evening.

There were traffic delays in the area for a period of time as emergency services attended the scene. 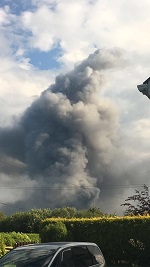 A view of the fire from the Woodlands area of Letterkenny

Plumes of smoke could be seen rising into the air from several miles away.

It's not thought there were any injuries.

Gardaí had asked residents in the Gortlee, Lisnennan, Ballyraine and Kiltoy areas - especially those who respiratory problems - to stay indoors and keep windows and doors closed.

Emergency services were still at the scene on Monday night at 10pm and there was still much smoke, four hours after the fire started.