Victory is a must for the Irish at Tallaght Stadium tonight

Donegal's Amber Barrett will be hoping to win her 20th cap tonight and help the Republic of Ireland to victory when they face Germany At Tallaght Stadium in Dublin. Kick-off is 5.00 pm.

A victory would see the Republic of Ireland Women’s National Team secure a Qualifying Play-Off spot for the 2022 UEFA Women’s European Championships.

Vera Pauw’s team are second in Group I behind Germany and know that they must finish in that position in order to take another step closer to the finals tournament in England.

Barrett was unfortunate to get only limited game time as a substitute in their last outing, but her great form of late for FC Koln could be a factor in the team selection. 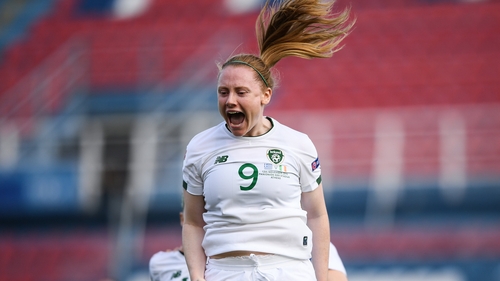 In terms of qualifying, the nine group winners and the three best runners-up (not counting results against the sixth-placed team) qualify directly for the final tournament, while the remaining six runners-up advance to the Play-Offs.

Germany have already been confirmed as Group I winners, which means that the runner-up spot and a Qualifying Play-Off is now between second-placed Ireland (13 points) and third-placed Ukraine (12 points).

At the same time that Ireland host Germany the other group game will see Ukraine play Montenegro. Pauw's team currently hold a better goal difference so they need to equal or better Ukraine's result in order to seal second spot.

The game is being shown live on RTE 2.

TEAM NEWS
Defender Megan Campbell and forward Leanne Kiernan are ruled out, while Hayley Nolan, Alli Murphy, Megan Connolly and Kyra Carusa were unavailable to meet up with the squad.

All of the players & staff tested negative for COVID-19. They each underwent testing before coming into camp, then in the team base on Monday, November 23, and again on Sunday, November 29.