The event, which is being spearheaded here by ATTR Amyloidosis All Ireland Support Group, takes place on October 26. The group is celebrating with the launch of their beautiful, specially commissioned short film,  'Hereditary Amyloidosis'. 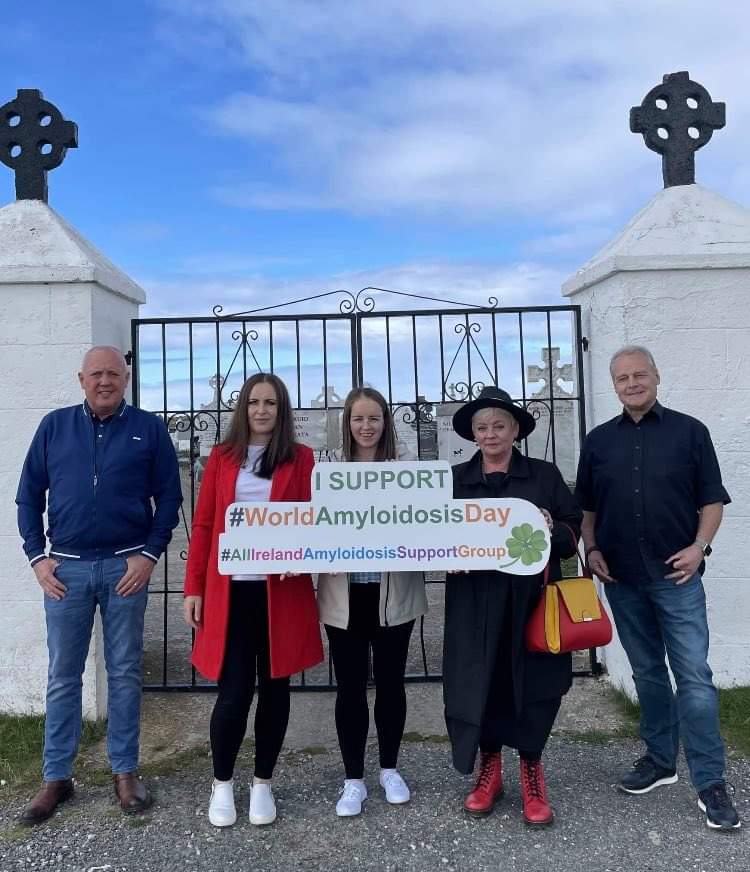 According to James Green, a member of ATTR Amyloidosis All Ireland Support Group who hails originally from Burt in South Inishowen, World Amyloidosis Day is essentially about raising awareness through  Amyloidosis Alliance and patient organisations from 18 different countries, spanning four continents.

He said: “Awareness is key to overcoming Amyloidosis because the earlier people are diagnosed, the better their outcome will be. We want to highlight the diagnostic delay patients face, which averages four years.

“In the Republic of Ireland, we have now got Patisiran, a gene silencing treatment, approved. So, diagnosis is going to be key because the outcome is going to be poorer for patients if they are diagnosed later in the day.”

Amyloidosis is a rare and complex disease which is barely known by the general public and medical professionals alike.

Amyloidosis Alliance chose the symbolism of the link for bringing patients, carers and all other caregivers together. It said: “Each and every one of us has something to bring to the fight against the illness.”

James Green said ATTR Amyloidosis All Ireland Support Group was looking for greater awareness through the medical profession and the public about the symptoms of Amyloidosis.

He added: “The family history of patients also needs to be explored further. This is key and brings us onto genetic testing, which needs to be more readily available to patients, particularly patients in Donegal. Donegal is a hotspot for Hereditary Amyloidosis. It is where the TTR ala 60 gene stems from. There would be other pockets throughout Ireland but there seems to be a real hotspot here in Donegal.

“As a support group, we would be looking to raise awareness in Donegal and beyond. That is also why we are having our first gathering on May 28, 2022, in An Chúirt Hotel in Gaoth Dobhair. Professor Julian Gillmore from the National Amyloidosis Centre  has agreed to come and speak, along with Professor Mary Reilly, the Head of Neurology at Queen Square Institute.  Professor Reilly was the author of the 1995 paper about Amyloidosis in Donegal. We have also invited Professor Emer Joyce and Dr Mark Coyne from The Mater in Dublin.

“We are looking at May's event being an international conference. We will be inviting local practitioners, GPs, cardiologists and families affected by Amyloidosis to come along and meet and hear more about the benefits of genetic testing and how they can actually go about it. Genetic testing can be quite readily organised through their GP or cardiologist.

Great! A digital human chain is being created throughout the world thanks to our profile picture filter! Upload it to Facebook and use it! #WorldAmyloidosisDay is coming up on 26 October. pic.twitter.com/LLDQM3NGGr

“It really comes back to awareness being key to diagnosis because the symptoms of Amyloidosis mimic other conditions and, as a result, it is often undiagnosed, which brings us back to World Amyloidosis Day and what is behind it, patients tending to get diagnosed four years later than what they should be. That is why  ATTR Amyloidosis All Ireland Support Group is spearheading the campaign through celebrities and families themselves,” said James Green.

Mr Green said  ATTR Amyloidosis All Ireland Support Group was asking families to promote awareness of the condition in their own families.

“We would also be asking heads of families to be tested even though they may not have any symptoms, so that it rules out the possibility of their children or off spring having the disease and eliminating the need for each of them to be tested individually.”

The five pillars on which Amyloidosis Alliance's activities are based and which are being promoted on October 26, are awareness and diagnosis, treatment, research, communication / information and advocacy.

Awareness and diagnosis: to raise the profile of Amyloidosis, still a very little-known condition that is diagnosed and treated very late with dramatic consequences for the patients.

Treatment: to help secure the best possible treatment and care for Amyloidosis patients around the world at affordable costs.

Communication / Information: to disseminate up-to-date and easy to understand news about everything related to Amyloidosis with its member organisations, other NGOs, healthcare professionals, industry and all other relevant stakeholders.

Advocacy: to lobby with decision makers, primarily with other international organisations, for improved research and a fast approval process for new treatments.