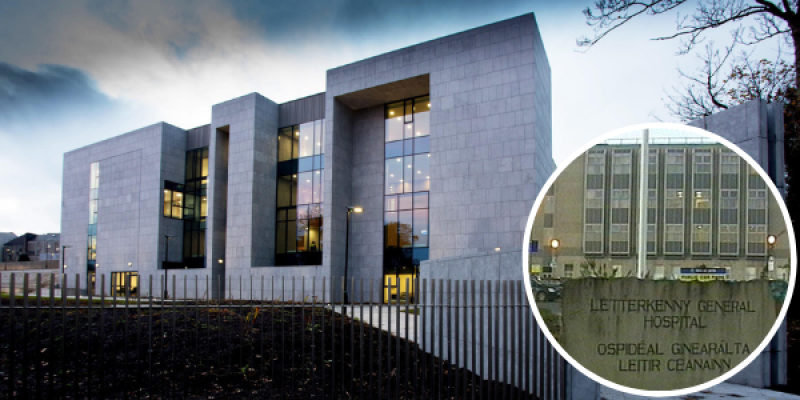 A man with 64 convictions who stole a poor box from the chapel at Letterkenny University Hospital has been jailed.

Gavin Mitchell stole the box containing approximately €300 before breaking into a Letterkenny hair salon and stealing €1,500 worth of equipment.

Mitchell, 44, with an address at Windmill View, Letterkenny, has been in custody since March 15 and appeared at Letterkenny District Court via video link from Castlerea Prison,

At 3.30am on March 5, 2022, Mitchell broke the poor box and a book case off a wall inside the chapel of LUH. Mitchell was identified when Gardaí viewed CCTV footage.

Sergeant Jim Collins told the court that Fr Chambers, the hospital chaplain, estimated that the donation box would have contained around €300. The cost of the damage caused was €180.

Mitchell made admissions when spoken to by officers.

Mitchell also pleaded guilty to a burglary at Ricky’s Hair and Makeup at Ramelton Road, Letterkenny at 4.30am on the same date.

The court heard that Mitchell smashed a door panel in order to gain entry to the premises.

Various items, including hair straighteners, a hair dryer, two iPhones and a tip jar, were taken. The equipment stolen was valued at €1,500 while €1,000 damage was caused to the premises.

Subsequent to the theft, Mitchell boarded a bus to Dublin and left the stolen items on the bus.

Some of the property was recovered and Mitchell made admissions when apprehended by Gardaí.

Judge Alan Mitchell accepted jurisdiction to have the case heard in the District Court and the accused pleaded guilty to the charges.

Solicitor for Mitchell, Mr Frank Dorrian, said that a pattern for a similar type of offending had been ‘going on all of his adult life’.

“The underlying issue, and it always has been, is addiction to illegal substances and alcohol,” Mr Dorrian said.

“He stole items for which he had no use. He was on a spree, brought about by desperation. He takes a recourse of refuge in these substances. It is a very sad and unfortunate tale.”

Mr Dorrian told the court that his client has been homeless at various times in Letterkenny. On one occasion, he was using a playground slide ‘as a dormitory’ and has also been sleeping on a stairwell at a carpark.

“The only roof available to him now is Castlerea,” Mr Dorrian added.

Judge Alan Mitchell said the theft of the donation box at LUH was ‘very sneaky and underhand’.

“People put money in the box for charity and he comes in to steal it,” Judge Mitchell said, imposing a four-month prison sentence, which he backdated to March 15, 2022.

The criminal damage and theft charge at Ricky’s Hair and Makeup were marked taken into account with Mitchell convicted on both.

Mitchell had a five-month suspended sentence hanging over him at the time of the offences, the court heard.

Judge Mitchell remanded Mitchell in custody with the suspended sentence matter to be dealt with at the April 7, 2022 sitting of Letterkenny District Court.