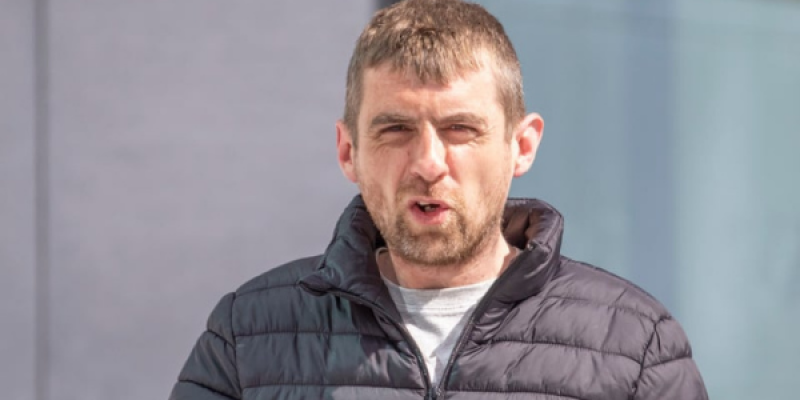 A young mother was left ‘petrified’ when her ex-boyfriend broke into her home and hacked through her bedroom door with a pair of scissors.

Andrew Laird left Sarah Louise McGavigan in fear after the incident in the middle of the night.

Laird appeared this week at Letterkenny Circuit Court over the burglary on July 14, 2019 at an address in Convoy.

At a previous sitting of the court, Laird, 33, of Beechwood Grove, Convoy pleaded guilty to the offence

On June 16, 2019, Gardaí were called to an address in Convoy to investigate a burglary.

Ms McGavigan told Gardaí that she was in bed from 10pm and at around 12.50am she heard heavy knocking at the window. She heard glass breaking and started shouting in the hope that the person would flee.

Laird ran upstairs and Ms McGavigan sought refuge in her bedroom, locking the door. Laird started banging on the door and a sharp object cut through the door.

Ms McGavigan rang her sister and, upon seeing the victim on the phone, Laird left through the back door.

Laird was arrested for burglary and made no admissions during an interview with Gardaí. Officers seized clothing and a pair of large green scissors which were believed to have been used to damage the door.

In a victim impact statement, Ms McGavigan, a single mother-of-two, told how she was ‘petrified’ over the incident.

“I was in pure shock,” she said in a statement read to the court by Garda McGrory. “It was pure out of the blue. My daughter was next door and I was so grateful that she wasn’t in the house.

“It not only has affected me, but has affected by kids too. They are hearing stories from their school friends. My daughter was scared for me in case he would come back.

“Everything has been horrible. I sleep with my bedroom window open every night.”

Ms McGavigan said she was seeking to leave Convoy to be closer to her mother.

Ms McGavigan had been in a relationship with Laird, but had not seen him in around six weeks prior to the incident.

Laird has 15 previous convictions, eight for drug-related offences, six for road traffic matters and one for possession of drugs with the intent to sell or supply.

Counsel for Laird, Ms Fiona Crawford BL, said the accused, a father-of-two, did not not have parental stability in his life.

Laird took to the stand and said he appreciated the seriousness of the incident.

“I regret every bit of it, I was completely off my head,” Laird said. “Thinking back, I’m disgusted with myself.

Ms Crawford told Laird that a concern for the Judge would be that he had a really bad attitude when it comes to women and dealing with problems in relationships.

“My head is in a lot better place now,” Laird said. “Drugs were messing with my head.”

Laird spent some time in White Oaks and was unable to read or write.

Ms Crawford told the court that Laird has a ‘deplorable attitude too women’.

“He seems to be drifting in life,” she said. “He has never drank, but he has issues when he gets into drugs. Drugs leads to paranoia, which then leads to erratic behaviour.”

“The offence of burglary alone,” Judge Aylmer said. “He entered a property and broke in a bedroom door with a scissors. It was a very serious offence that occurred on the middle of the night at an occupied property.”

Laird had engaged with the Probation Service and received drug addiction treatment.

Judge Aylmer said he would need some time to consider how to deal with the matter.

He adjourned the case to May 18 and Laird was remanded on continuing bail.