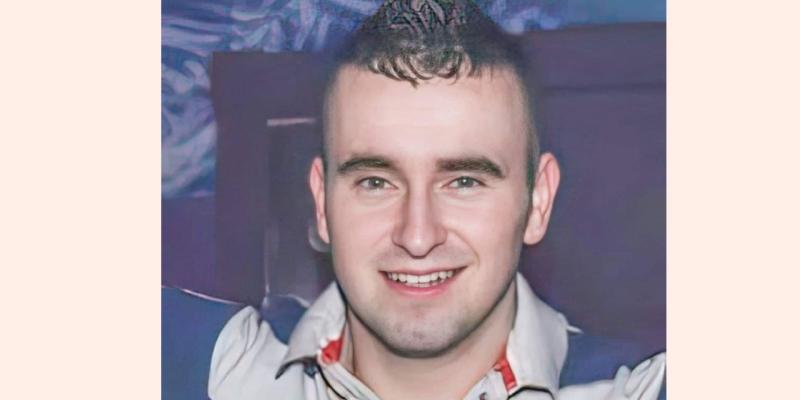 John Hegarty was killed instantly in the smash.

A Donegal man who killed his friend after speeding away from a pub says he thinks about the incident every day.

Seosamh McGonigle was driving at speed in July 2013 when he lost control of his Toyota Corolla at an accident blackspot at Carnashannagh, Burnfoot, crashing into a large boulder.

John Hegarty, a rear seat passenger who was 21 at the time, was killed instantly.

McGonigle and the front seat passenger survived the crash.

McGonigle, who pleaded guilty to dangerous driving causing death and having no insurance, was given a 16-month suspended sentence in 2018 and banned from driving for six years at Letterkenny Circuit Court.

At an inquest into Mr Hegarty’s death on Friday, McGonigle said he had no recollection of the accident.

He had collected Mr Hegarty and Lee McDermott from the Foot Inn when he ‘just lost control’.

“I have no memory of the accident, I just remember sitting in my car and then sitting in another car,” McGonigle said. “It’s all a blur.”

Questioned by Mr Peter Nolan BL, representing the Hegarty family, McGonigle told the inquest that he was ‘not sure’ how he had lost control and could not remember the speed he was traveling at.

McGonigle said he has not driven since the accident.

Asked by his solicitor, Mr Frank Dorrian, if he would like to say anything while in the witness box, McGonigle said: “I think about it every day and I’m sorry it happened.”

Evan Quinn, in a deposition read to the inquest by Sergeant Sean McDaid, recalled how he was ‘cruising about’ in his car, a Volkswagen Golf, on the night in question.

He pulled into the carpark at the Halfway House and two friends informed him that there had been a crash. When they arrived at the scene, he saw a Toyota Corolla crashed and on its driver’s side.

Seosamh McGonigle was calling ‘John, John John’ while John Hegarty was in the back seat and Mr Quinn remembered assisting Lee McDermott, the other passenger, from a hedge.

In a deposition, also read out in his absence, Mr McDermott said he had ‘very little recollection’ of the incident.

“Everything is a blur,” he said, recalling how he was told by his brother and father at Letterkenny University Hospital that he had been involved in an accident and that John Hegarty had died.

“I don’t remember anything and I’m glad in a way,” he said. “Some things you’re better off not remembering.”

Mr McDermott spent two days in LUH suffering injuries to his head, hand and ankle. “I just want to pit the whole thing behind me.”

Gemma McGrory was a student nurse at the time and a unit officer with the Fahan branch of the Red Cross. Ms McGrory was returning home from a trip to the cinema with her boyfriend when they noticed cars parked on the side of the road. A silver car was crashed and laying on its side.

Mr Raymond Hegarty told how he had the harrowing task of identifying his son to Garda Vaughan at the scene.

Coroner Dr Denis McCauley said that Mr Hegarty - who was from Lisowen Avenue in Buncrana - had a number of injuries, the largest being the rupture of his aorta, the main artery in the heart. “He immediately would have lost consciousness,” Dr McCauley said. Mr Hegarty sustained a significant rupture to his liver, bruising to his lungs and a broken pelvis. “Each injury was significant,” Dr McCauley said. “The injuries were not reversible. Even if he was immediately attended to, he wouldn’t have been able to survive.”

The cause of Mr Hegarty’s death, Dr McCauley said, was multiple traumatic injuries as a result of a road traffic accident.

The roof was crumpled, the rear axel was dislocated and the handbrake cable broken. The front lights, bumper and window were all smashed while there was damage to the boot and back lights.

The back seat was dislodged and there was massive impact damage to the rear passenger wheel.

The car was in a serviceable condition pre-accident, Garda Mulkearns said.

Sergeant Kevin Giles, a forensic collision investigator, told how he examined the scene. A large boulder was moved 12.7m from its original position when the Toyota Corolla collided with it. Branches on the hedge were broken, consistent with the car traveling close to the crash barrier. The vehicle rotated in a clockwise direction, he said.

Sergeant Giles said the road surface was in a good condition and a mechanical defect was not considered.

The driver’s action was considered as contributory, as was the speed of the vehicle. A speed limit of 80km/h governed the road in question. Sergeant Giles said that a vehicle traveling at that speed should have been able to come to a stop earlier.

Mr Nolan asked if an exact speed was calculated and Sergeant Giles explained that it was not possible due to the variation of the terrain in which the car had traveled.

Dr McCauley said his finding would be as per the findings of the Circuit Court case.

“It has been traumatic, but I hope the family now have more understanding of the events,” Dr McCauley said, thanking those who assisted on the night.

Mr Nolan paid tribute to the emergency services and to Ms McGrory whose ‘services were beyond the call of duty’.