'A miracle nobody was killed': Speeding car crashes into Manor house

A man in his 20s was arrested following the incident at Corkey, Manorcunningham, in the early hours of Monday morning 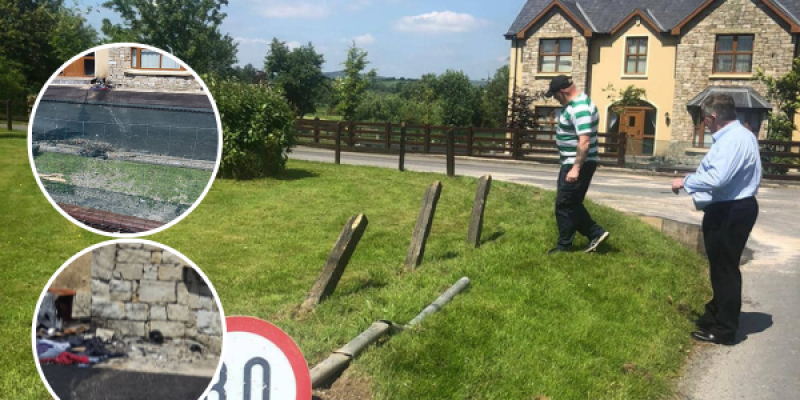 Councillor Gerry McMonagle surveys the damage and (inset) the damage to another fence and house.

A Manorcunningham family had a lucky escape when a speeding car crashed into their house this week.

A man in his 20s was arrested by Gardaí, who were swiftly on the scene of the incident at Corkey, Manorcunningham in the early hours of Monday morning.

There are renewed calls for extra Garda patrols in the Manorcunningham and Pluck areas following repeated incidents in recent weeks.

At around 3am on Monday, Gardaí attended the scene of a single-vehicle road traffic collision.

“The vehicle had collided with a residential property,” a spokesperson for An Garda Síochána told Donegal Live.

“A male (20s) was arrested at the scene and taken to Letterkenny Garda Station.”

The car, which was being driven at high speed, crashed through two road signs and a fence before careering into a house at the Pluck junction with the old Letterkenny road.

Donegal Live understands that Gardaí did not mount a managed containment operation. No-one was injured during the incident.

Letterkenny-based Sinn Fein Councillor Gerry McMonagle, who is the Chairperson of the Donegal Joint Policing Committee, said there have been several incidents involving damage to cars and reckless driving in recent times.

“That nobody was killed was a miracle,” Councillor McMonagle told Donegal Live.

“The house took the full impact of the speeding car and sustained structural damage. Gardai were quickly on the scene.

“Lucky enough it was the early hours of the morning and no one was about. The family in the house had a lucky escape and were very frightened and shook by the incident.”

Councillor McMonagle has contacted the roads section of Donegal County Council and asked them to replace the signage and has asked that the implementation of safety measures at the junction be explored.