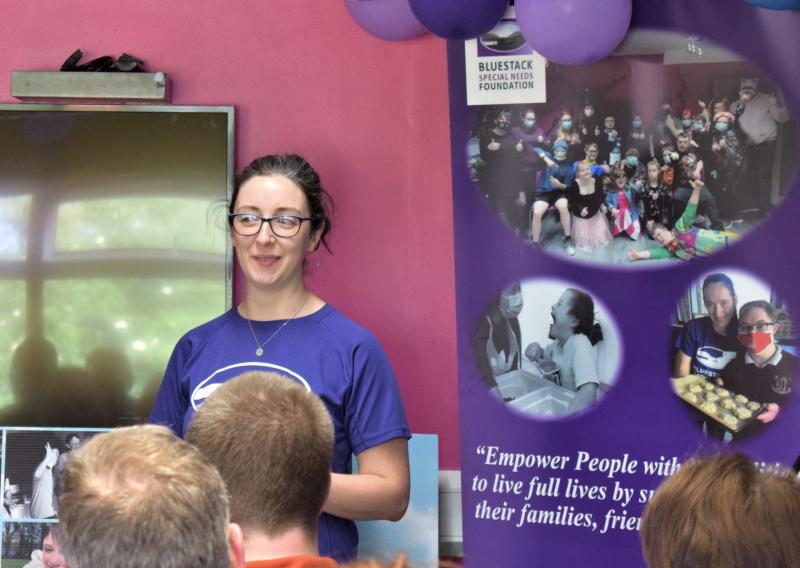 Mental and physical health go hand in hand, and both can be greatly enhanced when people pull together to create a web of support for each other.

That was the overriding message during this week’s visit by Minister of State for Public Health, Well Being and National Drugs Strategy Frank Feighan to Donegal Town. 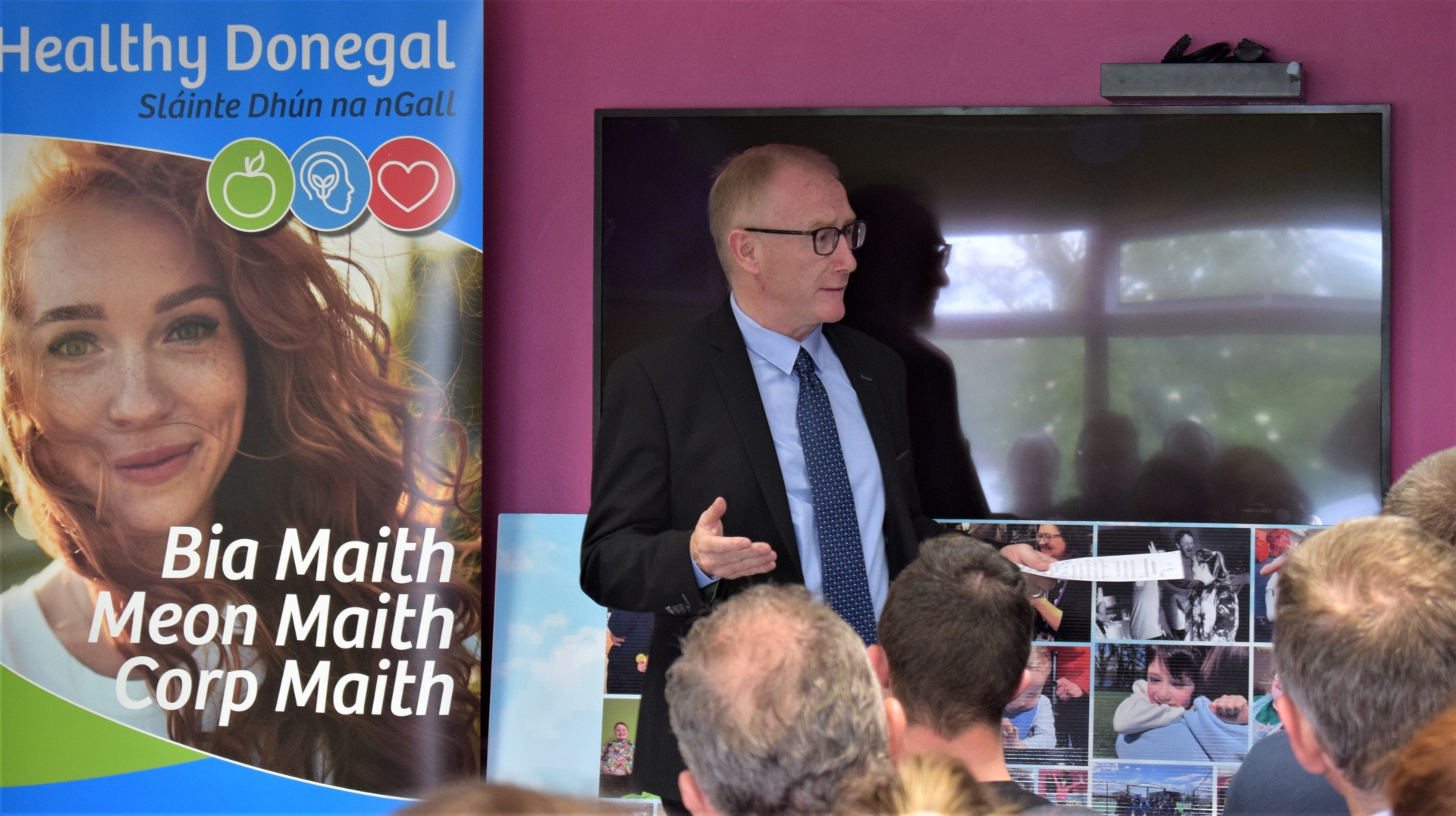 The Minister of State saw first hand how people with vision and determination are having a massive positive impact on vulnerable people in their communities. He heard how formal structures have been used to create holistic support networks, responding to the physical and emotional needs of the people with whom they work.

Nowhere is this more true than at the Bluestack Special Needs Foundation in Donegal Town, Minister Feighan’s first port of call during Monday’s visit. 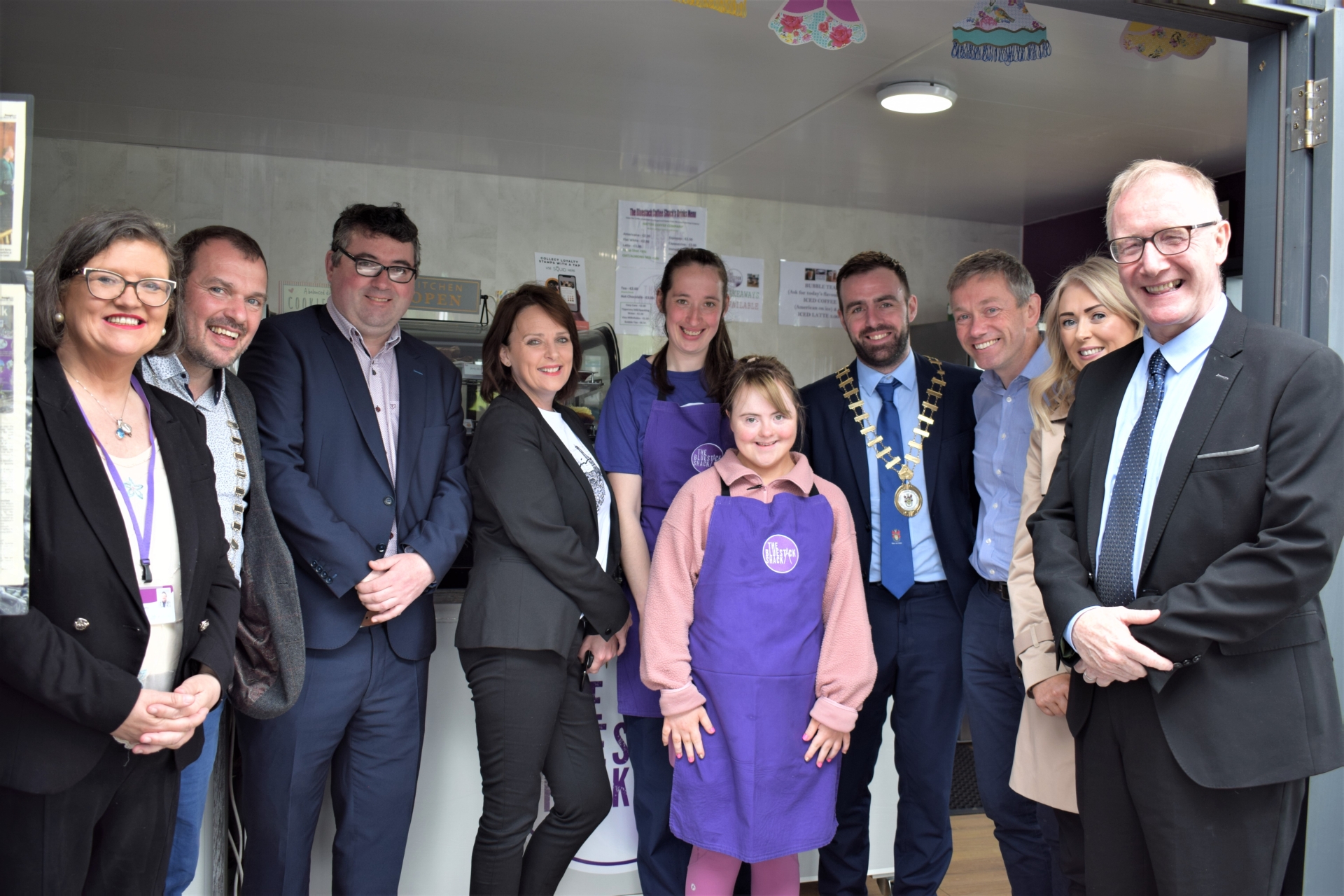 The minister was there to see how grants from the Healthy Fund were benefiting the Donegal Town community.

Having received a very warm welcome from staff and service users at the Bluestack Special Needs Foundation, Minister Feighan heard how the organisation came to be established. He  also heard about the huge range of support services it is now offering.

“They realised how difficult it was to get access to the supports and services you need.

“In 2002, rather than having a 40th birthday party, Patrick McBrearty decided to try and get 40 friends to walk 40kms to raise €40,000. That was dispersed to families of people with additional needs.”

“Last Saturday we had the 20th anniversary,” continued Ms McCarry.

By 2006, the McBrearty family had realised that there was a strong desire for a place for people with additional needs and their families to go, and so began the journey to establishing the Bluestack Special Needs Foundation.

There were many challenging times along the way, not least when the organisation was left with a huge mortgage after promised funds didn’t come through following the economic crash.

But thanks to a lot of determined work and support from the community, the foundation survived. It has since evolved into a support network that is unequalled in terms of how it responds to the needs of its users.

“We have 374 families from across County Donegal, and 40 staff and over 90 volunteers,” said Ms McCarry. 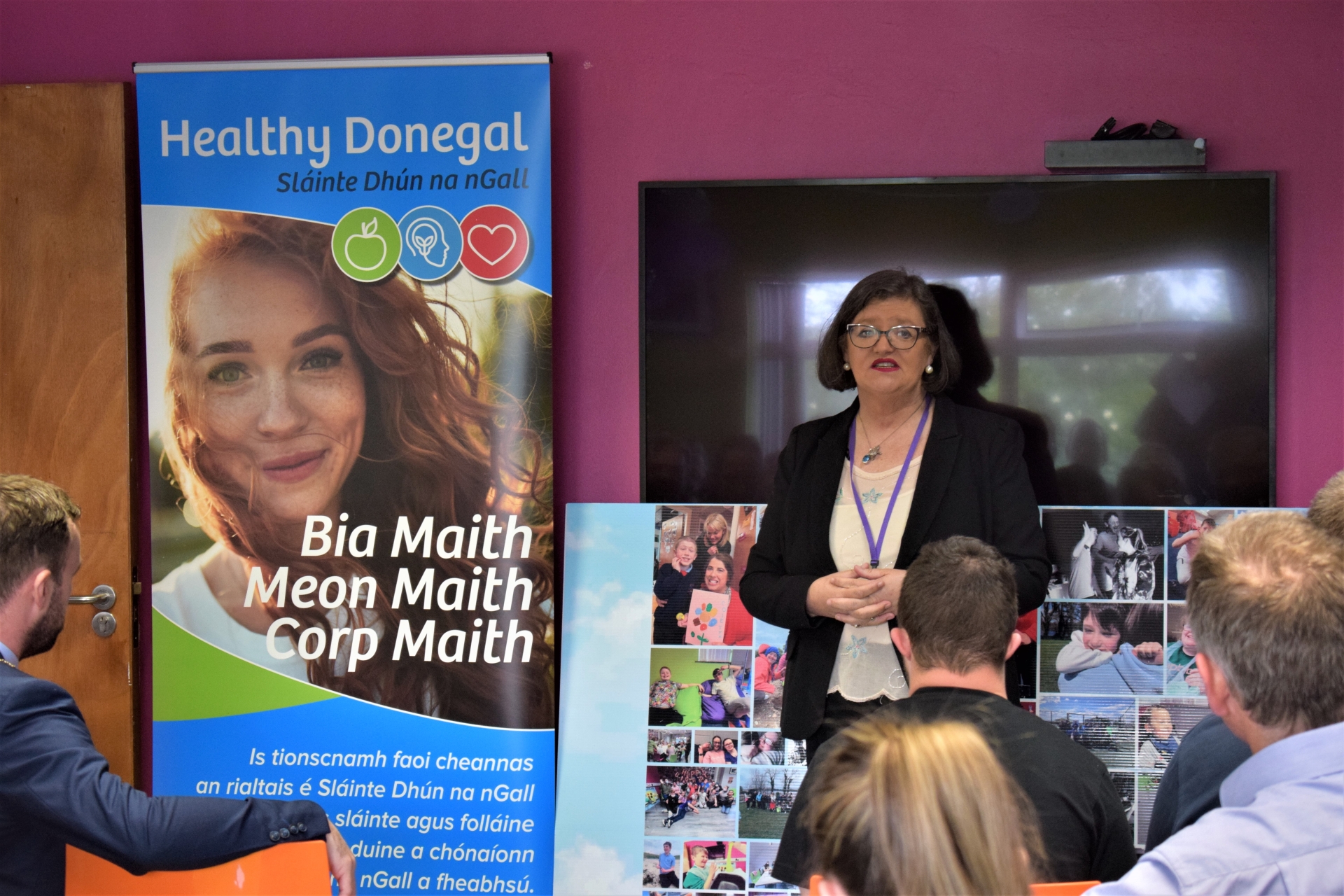 Covid had a big impact on service users and their families, and the facility is now more important than ever.

Ms McCarry outlined strands under which the organisation supports families. From clubs and activities to support workers who go into people’s homes to provide respite, every aspect of the lives of a person with additional needs is covered. People are supported far beyond childhood, with programmes that help adults learn life skills and prepare for the workplace or further education.

This includes the fantastic Bluestack Shack coffee dock which opened earlier this year, and where the visitors enjoyed coffee and scones as part of the visit. 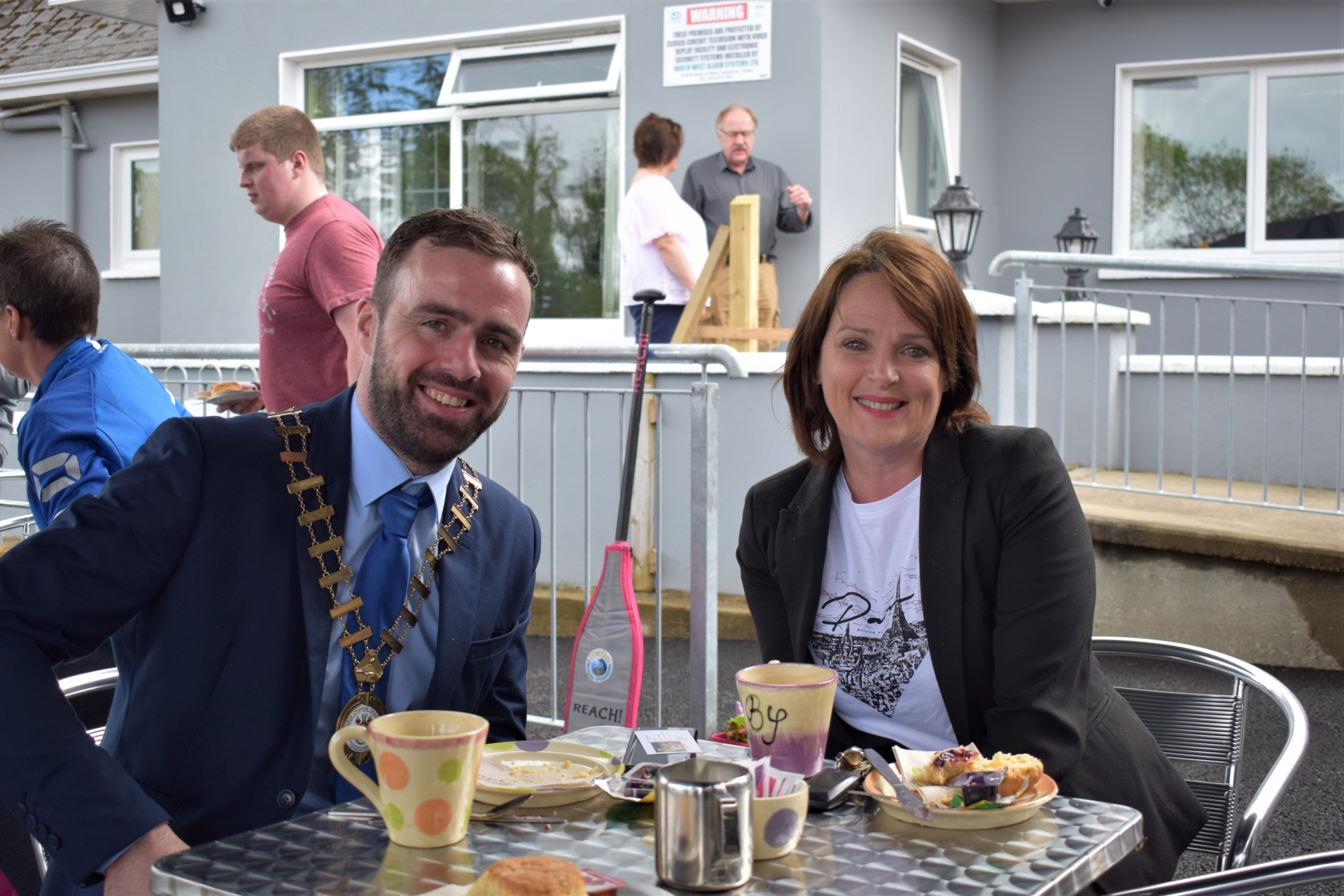 It also includes the polytunnel and gardens.

Emer McMullin from the Bluestack Special Needs Foundation outlined how those who use the organisation had benefited from Healthy Ireland funding.

She explained that a group of young adults had taken part in a certified horticulture programme.

They went from growing vegetables in a polytunnel to learning to cook. The group then learned about the connection between physical health and nutrition, and about the link between food and mood.

“We wouldn’t have been able to do that without Healthy Ireland and without the input of the young adults,” she said. 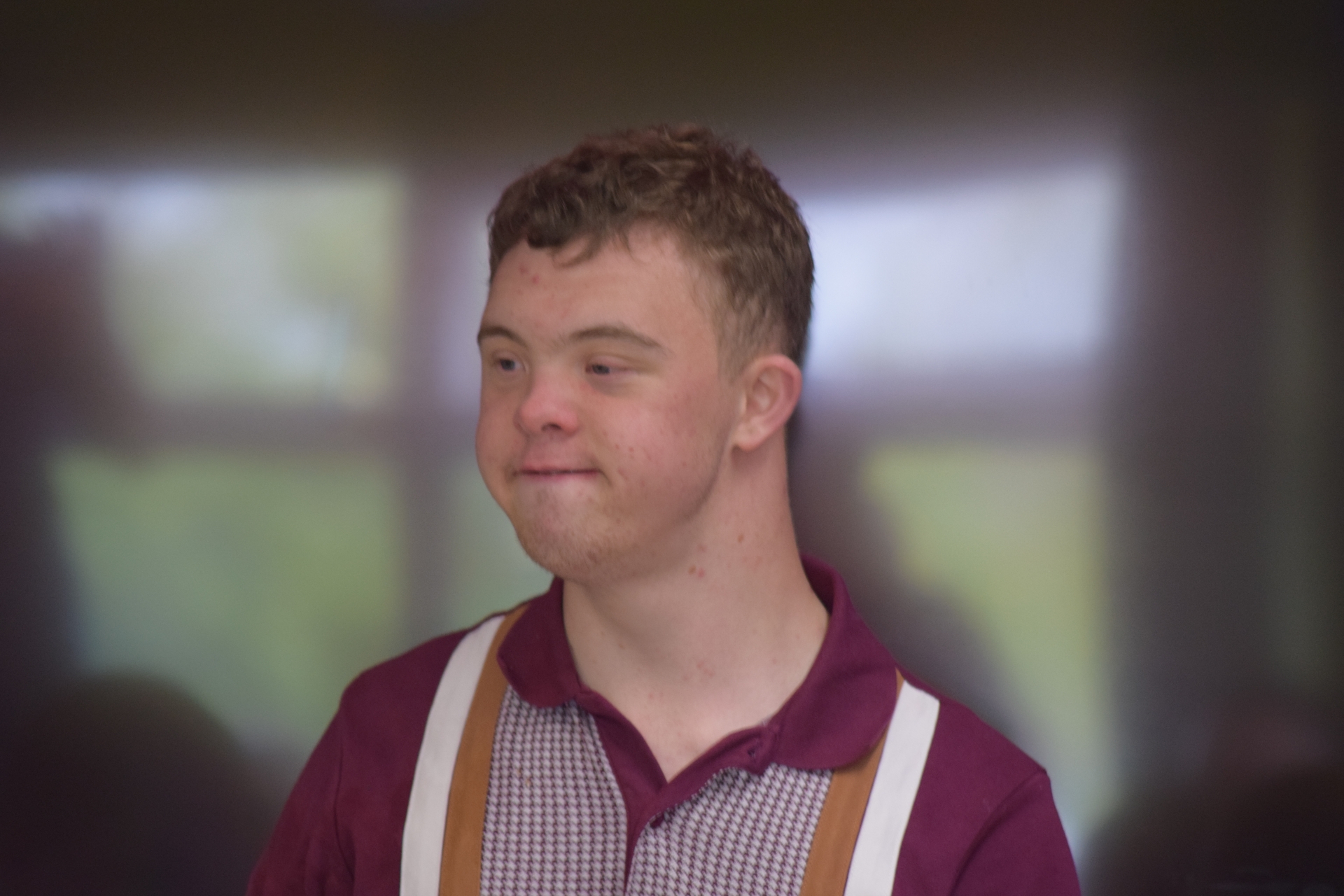 Indeed, the incredible results of the seeds from which the Bluestack Special Needs Foundation grew could be felt all around at the Donegal Town facility. From delicious food served with the biggest smiles at the Bluestack Shack, to the happy and supportive atmosphere, it is clear that this organisation really is something very special.

Cathaoirleach of Donegal County Council, Cllr Jack Murray told those gathered: “If everybody had the positivity that you have, the world would be a better place.” 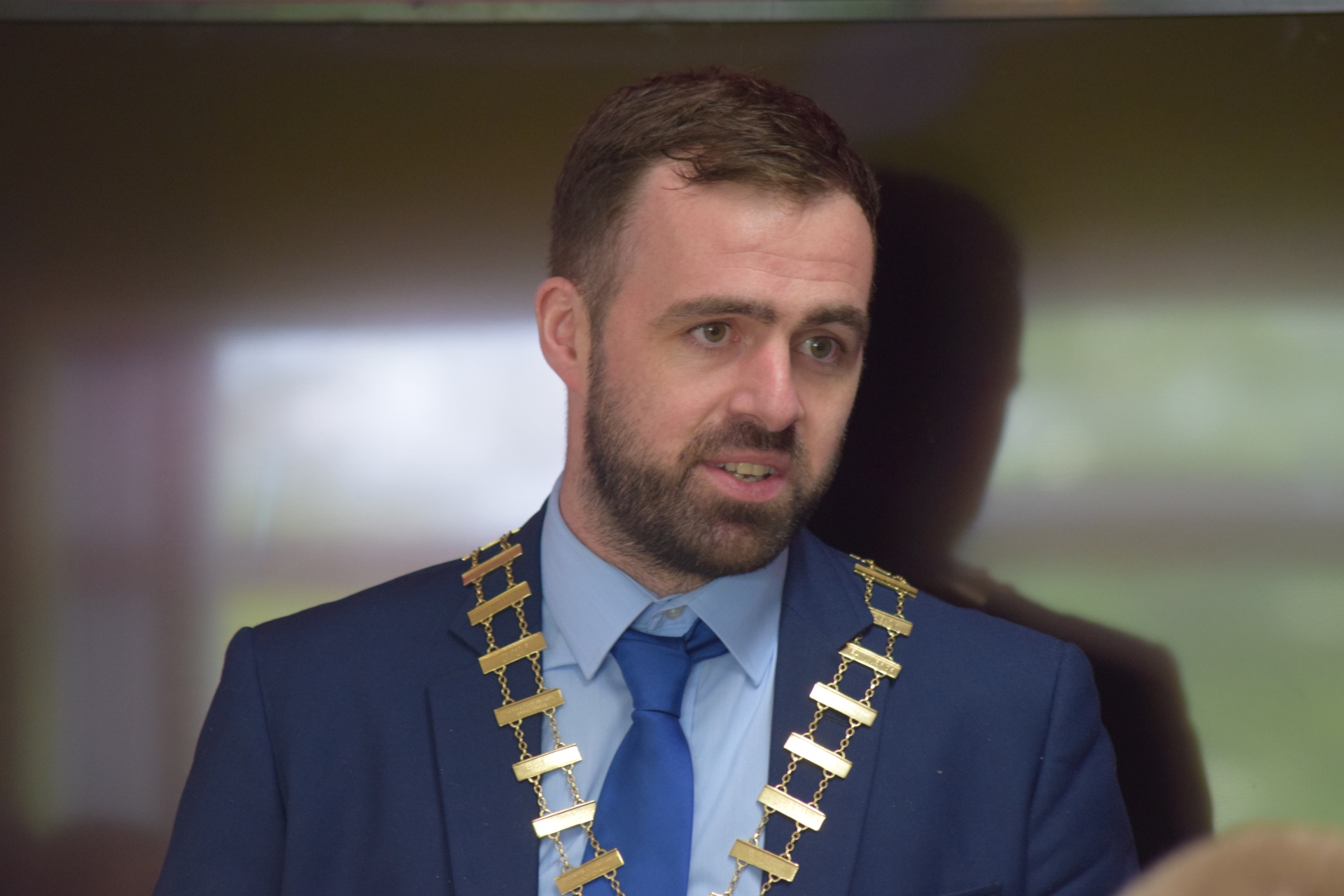 Also present at the Bluestack Special Needs Foundation on Monday were members of Donegal Dragons, a dragon boat club for breast cancer survivors and supporters.

They too benefited from Healthy Ireland funding for the publication of a book The Bay which aimed to promote mental health among its members and the wider community.

The book is a collection of reflections, reminiscences and photographs about the Donegal Bay area.

“We are very grateful to Margaret Fitzgerald and Healthy Donegal.”

As with the Bluestack Special Needs Foundation, the mental and emotional wellbeing of its members is at the core of the club’s ethos. 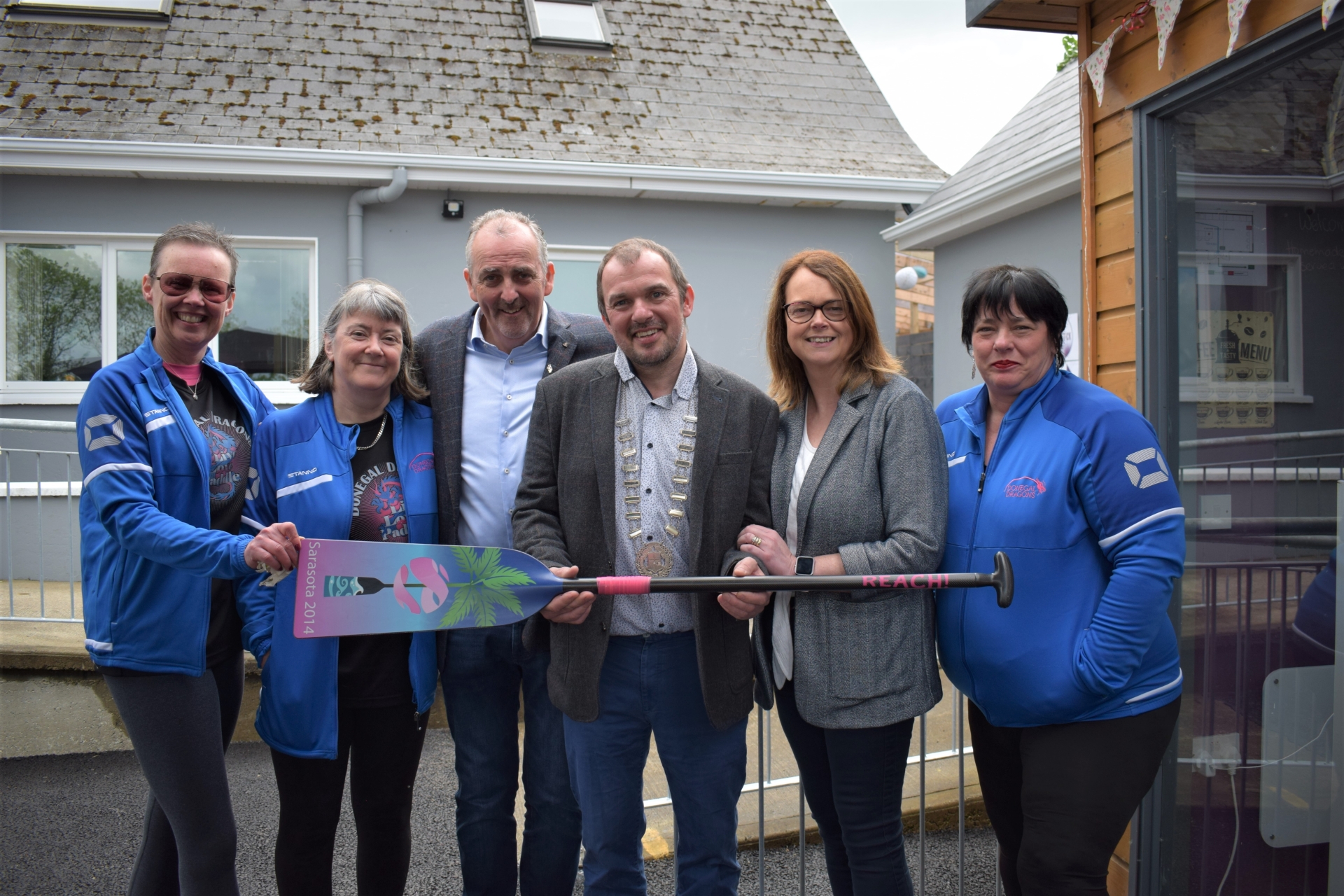 Ms Bonner explained that she had been diagnosed with breast cancer at 40.

A few years later, while physically recovering from the illness, she attended a talk by Jim McGuinness at Relay For Life. It was there that she first heard about dragon boating, and its benefits for breast cancer survivors.

Ms Bonner travelled to Dublin to join the Plurabelle Paddlers, and after a few months she set up the Donegal Dragons.

“Seven years on and it is probably the most diverse group you will ever be in,” she said.

“We have paddlers from 11 years of age to 81. You don’t need experience, all you need is to turn up.”

Ms Bonner spoke with great courage about the emotional and mental health challenges that follow a cancer diagnosis.

“You get your treatment and then you get sent out into the world to get on with it,” she said.

“You meet people and they say you are looking well, and you agree. But you might have just spent three hours crying in the bathroom because that fear is always there, the fear that the cancer will come back.

“That is the most important thing about our club, the support and the understanding.” 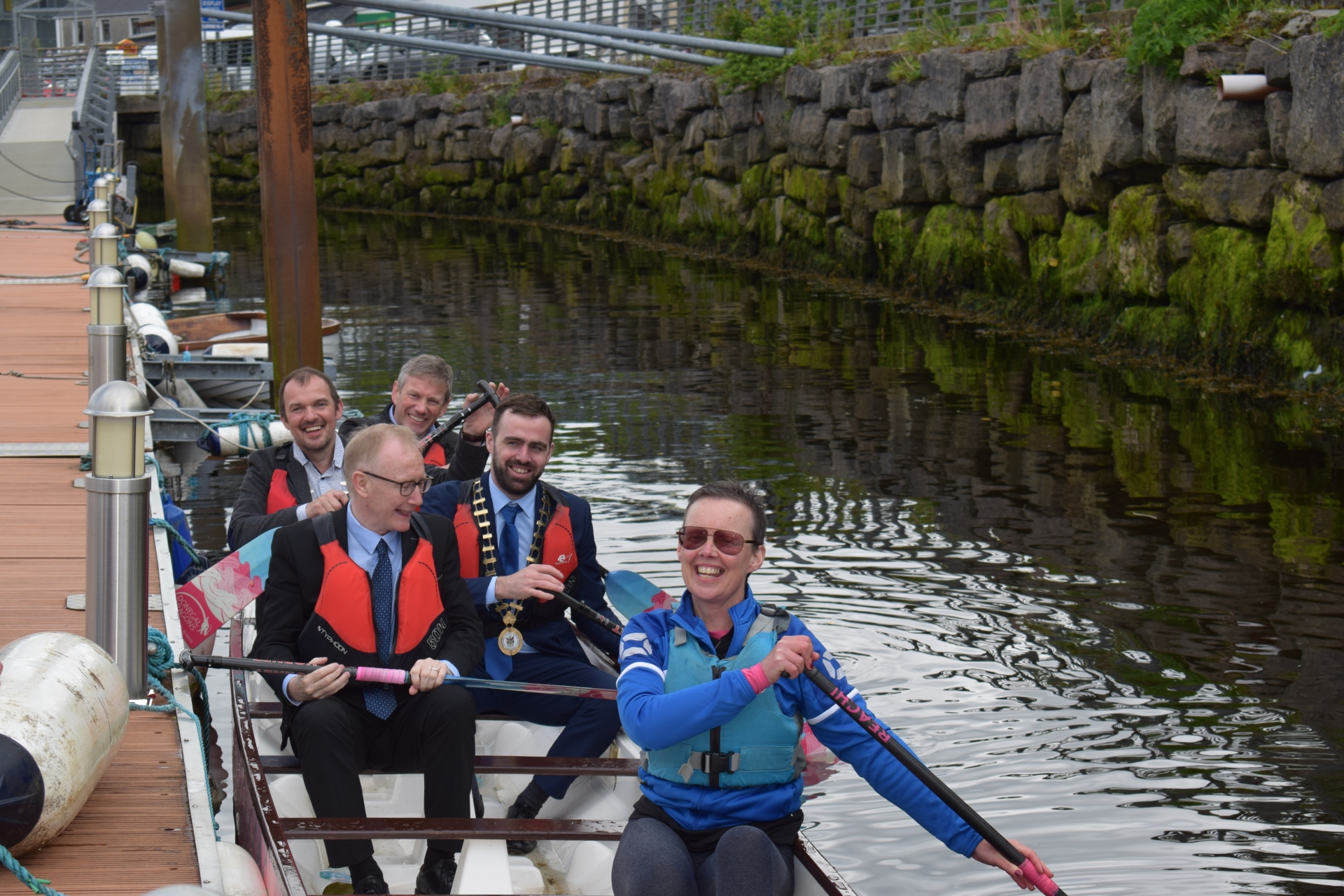 Minister Feighan visited the pier and was very enthusiastic about getting on to the dragon boat.

Marie Drumgoole of Donegal Dragons presented him with a copy of The Bay. 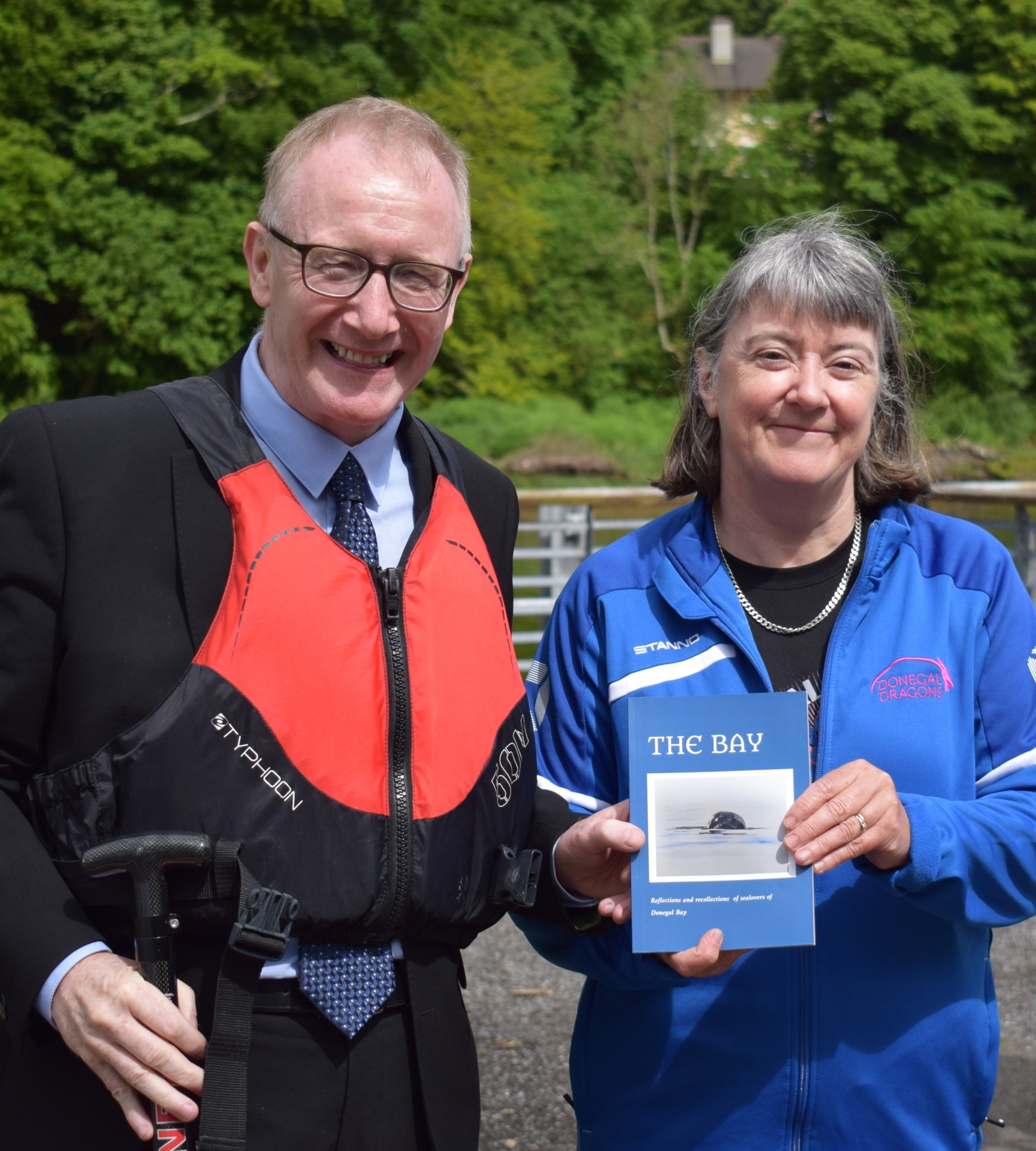 During his address at the Bluestack Special Needs Foundation, Minister Feighan encouraged the people of Donegal to keep applying for Healthy Ireland funding. 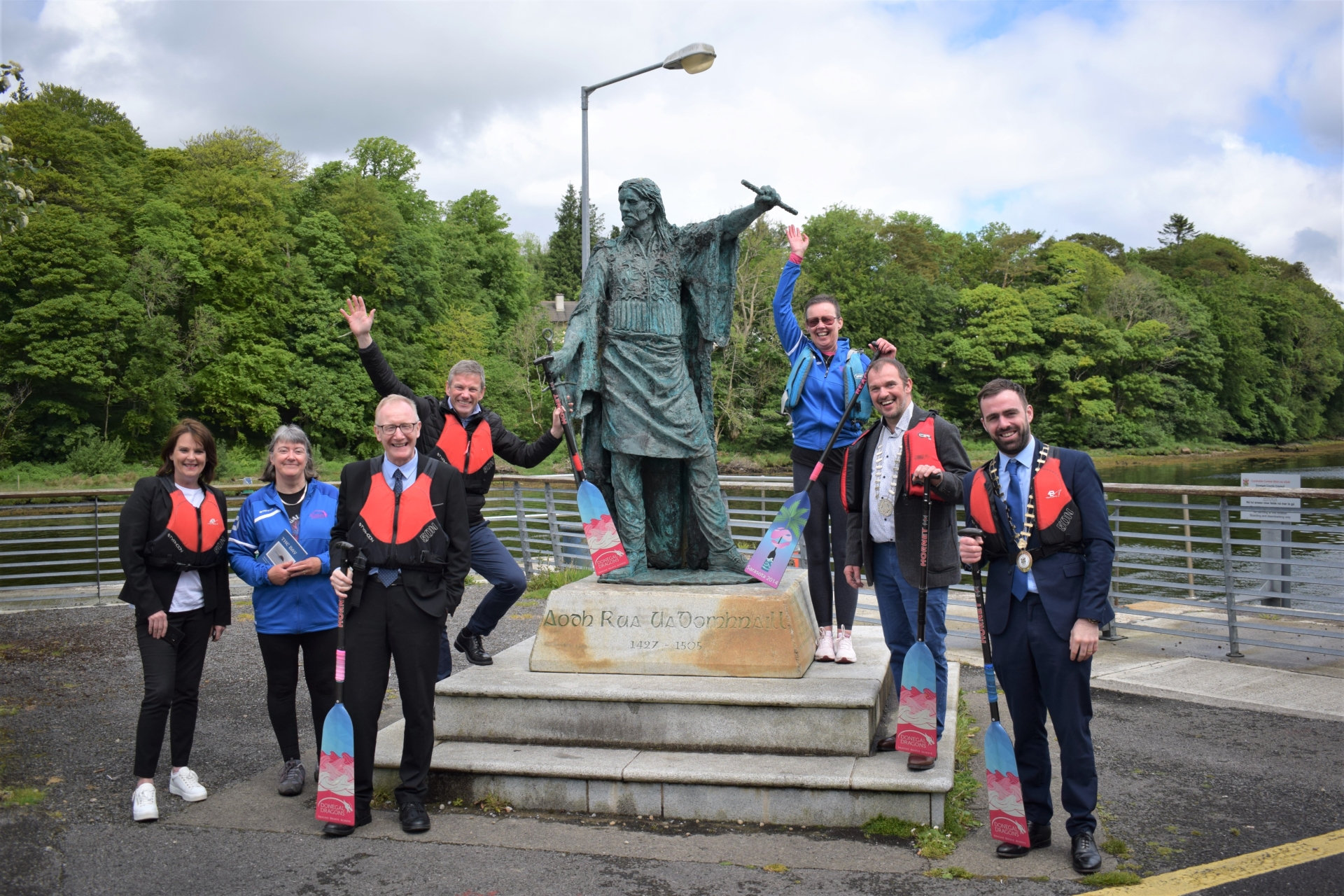