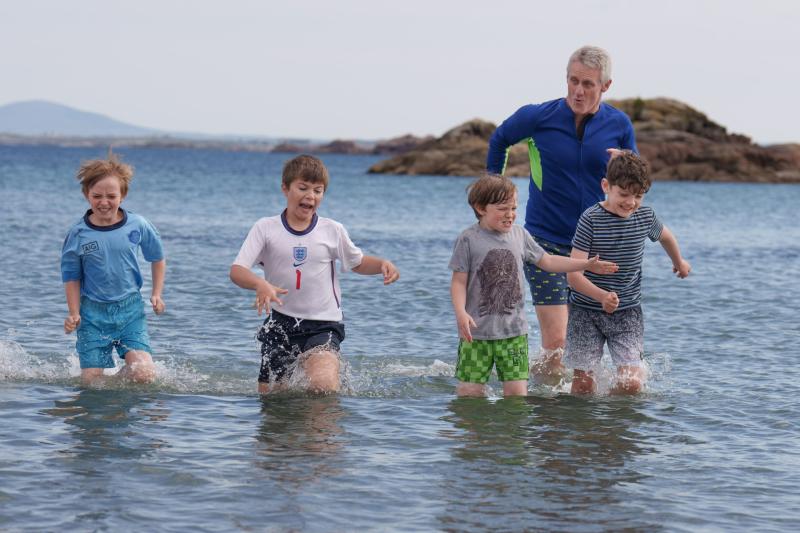 Paul McCambridge races with some of the children

An open water safety programme delivered on Arranmore Island has been described as a hugely successful cross-community project.
The initiative was coordinated by Donegal Sports Partnership in conjunction with its community partners Ionad an Chrois Bhealaigh, Gairmscoil Mhic Diarmada Oileáin Arainn Mhór, Scoil Athphoirt, and SN Árainn Mhór 1. The sessions were delivered by Wildswim, Maghery Coastal Adventures and the RNLI.
Maureen McCoy and Paul McCambridge from Wildswim provided open water swimming lessons to 32 children from both primary schools over four days.
Pupils from Scoil Athphoirt and SN Árainn Mhór 1 enjoyed 30-minute sessions in the open water beside their respective schools on Leabgarrow and Aphort beaches.

Activities included safety in and around water, building fundamental aquatic skills, and developing swimming strokes. One-hour lessons were also provided for the ten students from Gairmscoil Mhic Diarmada at Leabgarrow Beach. This group got an opportunity to develop water safety skills, improve their swim technique, jumping, and diving safely. 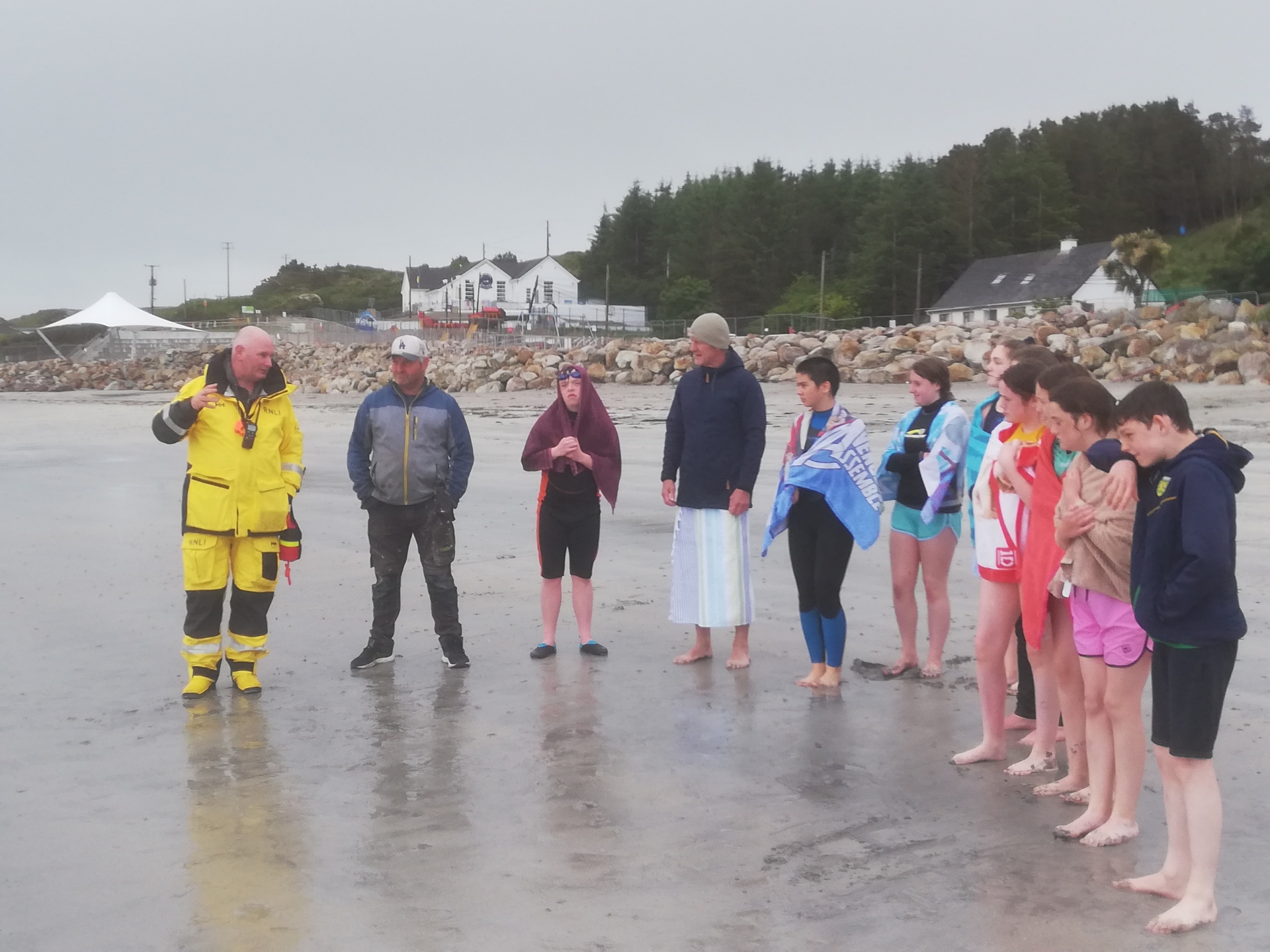 Mary Doherty, Gairmscoil Mhic Diarmada Principal, spoke about the benefits of taking part in this programme.
"The children had an opportunity to acquire new skills and competencies. They were also afforded the opportunity to have fun, to work as part of a team, and grow in confidence,” she commented.
Maureen McCoy said she enjoyed being part of the programme.
“Paul and I were made so welcome by the pupils and staff of the Arranmore schools participating in this pilot safe swimming programme. The pupils were enthusiastic throughout the four days despite the changeable weather. We saw improvements, not only in their swimming skills, but also in their confidence and awareness of water safety in their local areas. The pupils were so attentive, polite and friendly,” she added. 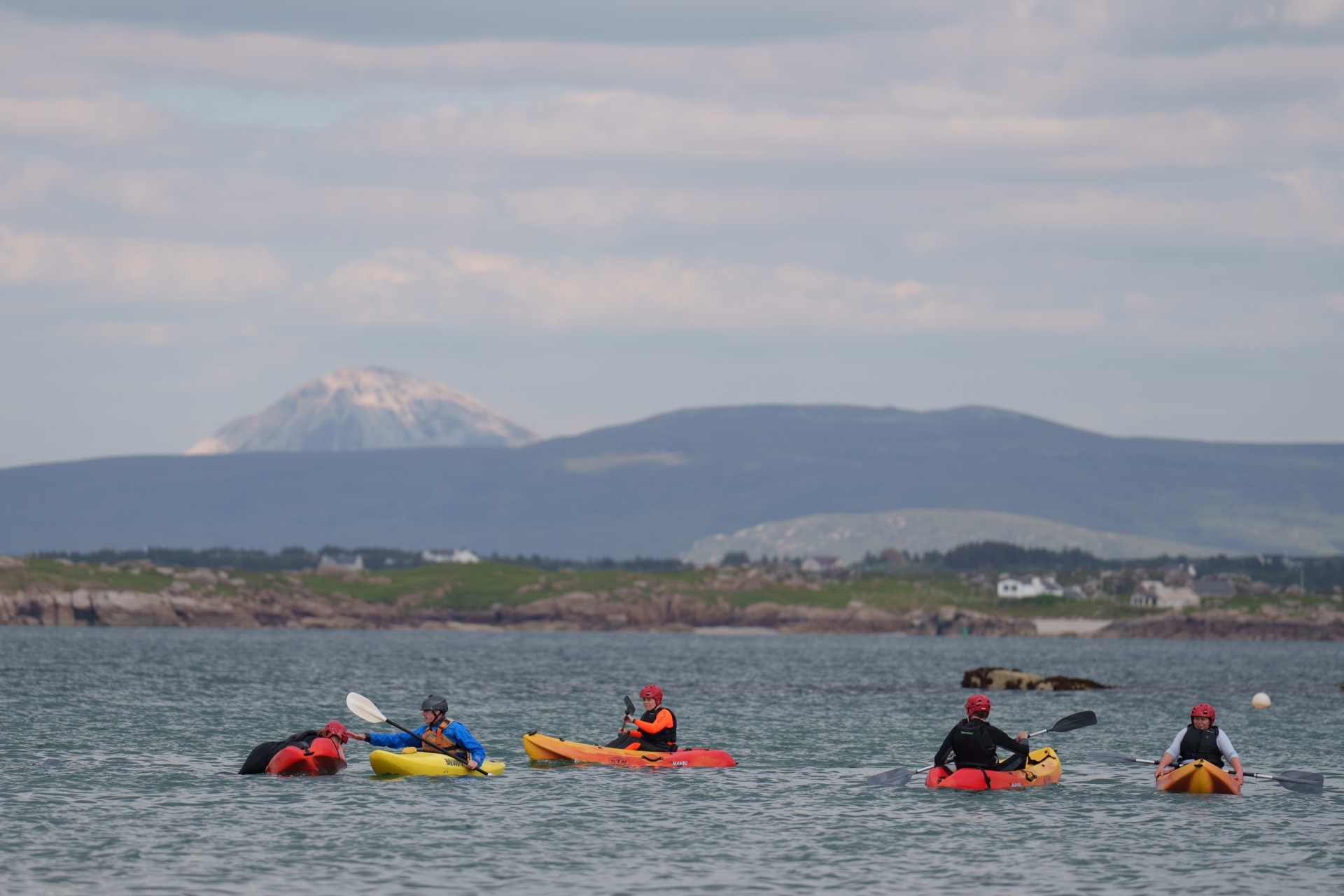 Stephen Bell oversees a practice recovery with the Kayak group

Maghery Coastal Adventures, in collaboration with Ionad and Chrois Bhealaigh, is coordinating the ongoing kayaking safety and skills programme and has teenage groups and adults taking part. These three-hour sessions are being delivered by Stephen Bell and topics being covered are equipment safety checks, personal paddling skills including self-rescues, group skills, towing and assisted rescues, and an overview of weather and tides. 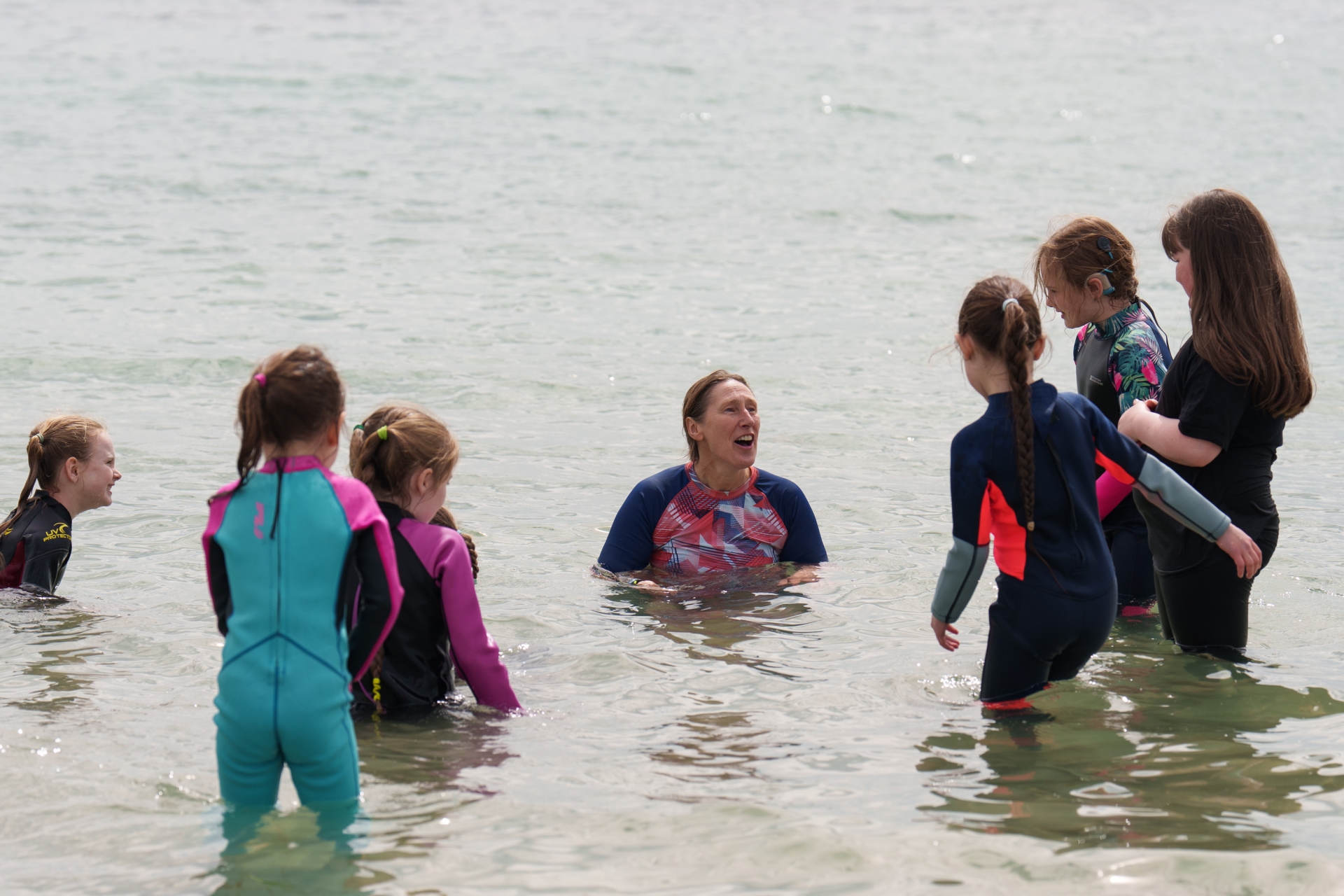 Maureen McCoy - having fun with the children

The RNLI, led by John McCafferty of the RNLI Launching Authority and Ionad an Chrois Bhealaigh manager, provided a practical rescue for the teenage group at Leabgarrow Beach with his team of Jimmy Early, station coxswain, John McHugh, mechanic, Sean O'Donnell, crew, Micky McHugh, crew, and John Boyle, crew. The crew demonstrated different rescues on the water, using the boat and rescues from the beach.

They also demonstrated how to throw a line and buoy to rescue a swimmer in the water. The teenage group all got an opportunity to put their skills into practice after the demonstration and the evening concluded with a short question-and-answer session. The group benefited hugely from taking part in this session, as they saw first-hand how a rescue is done from a boat and as a bystander on the beach. 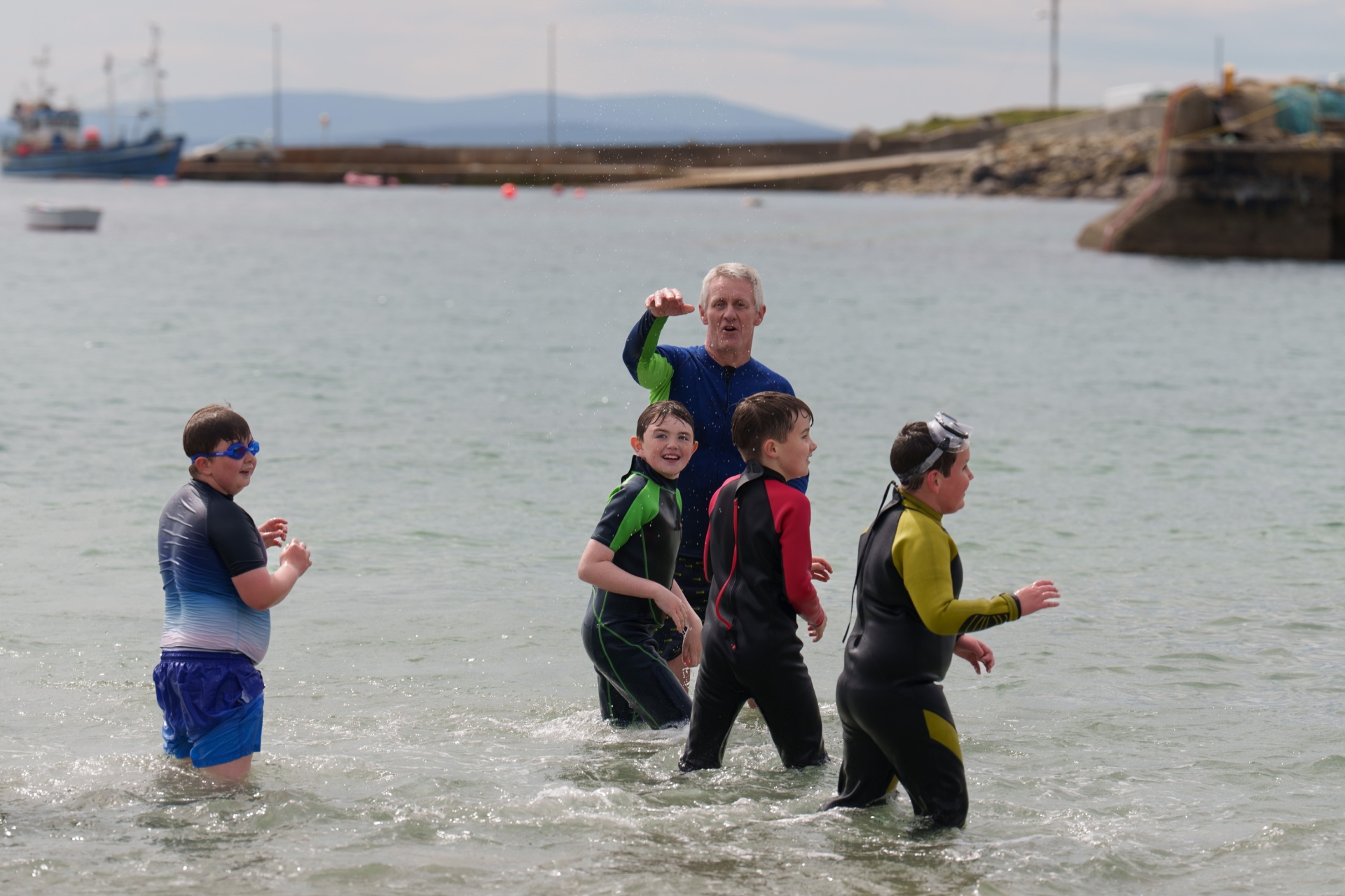 Paul McCambridge of Wildswim leads one of the lessons

Education and training coordinator with Donegal Sports Partnership, Maggie Farrelly, who oversaw the programme, said: "The programme has been hugely successful and was so well received across the island of Arranmore. The working partnerships with all organisations worked extremely well. The common goal for all involved was to create awareness of open water safety by providing opportunities, particularly for the young people on the island, to engage in open water activities in a safe and fun environment. After this successful pilot run, we hope to be in a position to do it again.” 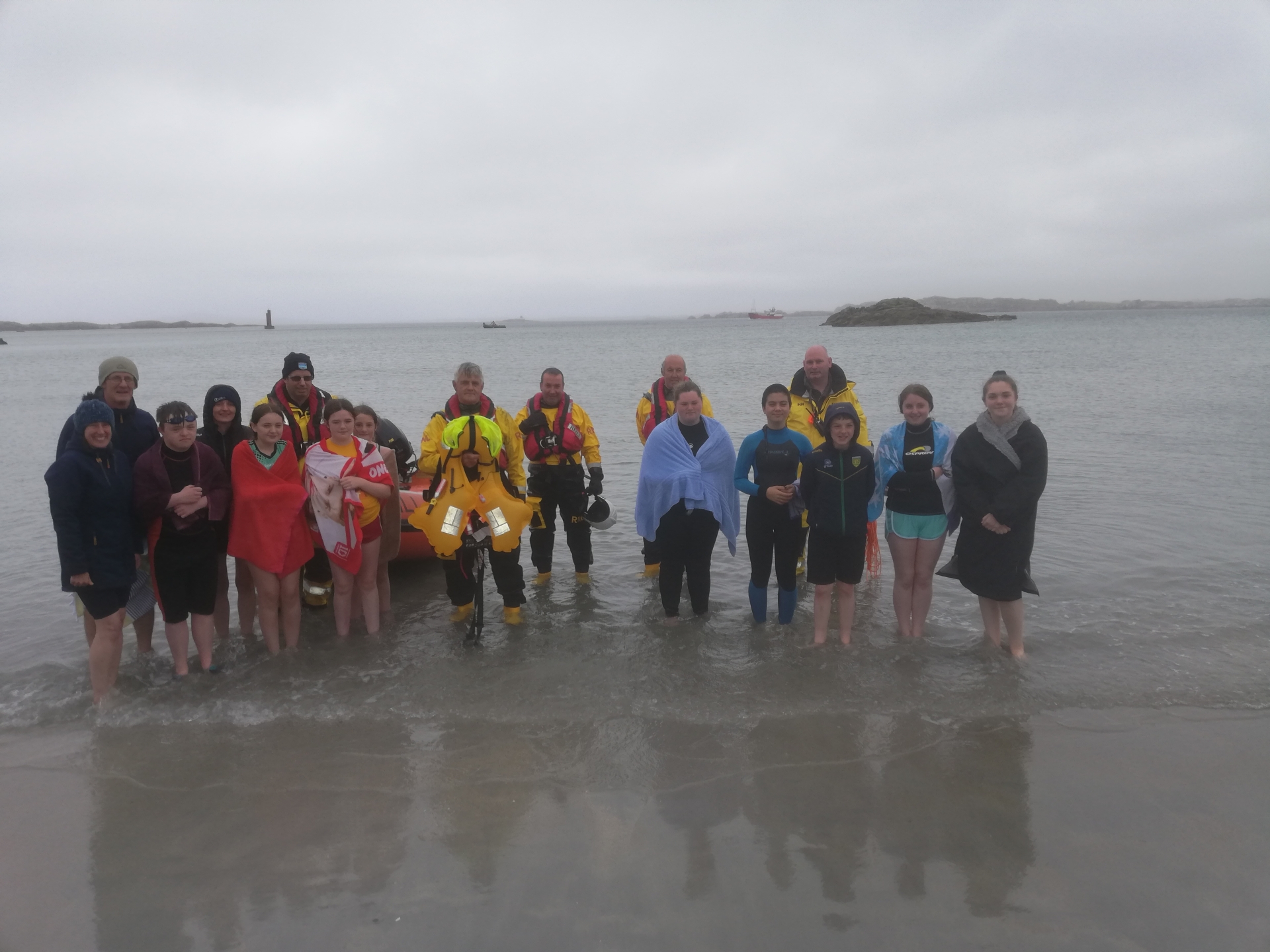 RNLI crew members, Maureen, Paul and Maggie, along with some of the young participants

"The drivers behind this programme were Elaine Grady, Maureen McCoy, and Paul McCambridge who formulated a plan while supporting Paddy Conaghan on his swim around Ireland. This idea grew momentum quickly and landed on my desk via Maureen McCoy, as Maureen had previously delivered on our Open Water Swimming workshops, and that relationship was already established. We got huge support and buy-in from all partners on the island, namely John McCafferty, Mary Doherty, Aine Rodgers from Scoil Athphoirt, and Michelle Coll of SN Árainn Mhór 1.
“It is also important to note that Elaine Grady, an SNA at Gairmscoil Mhic Diarmada, worked extremely hard to initiate this programme, and provided great support and drive throughout the week. This project is a great example of what can be done when community groups and locals come together with a common purpose," the education and training coordinator added.