Paul McGinley 'humbled' to get Freedom of Donegal honour

"If Donegal was a stock, I would buy it" - McGinley is hugely upbeat about golf tourism potential in the country 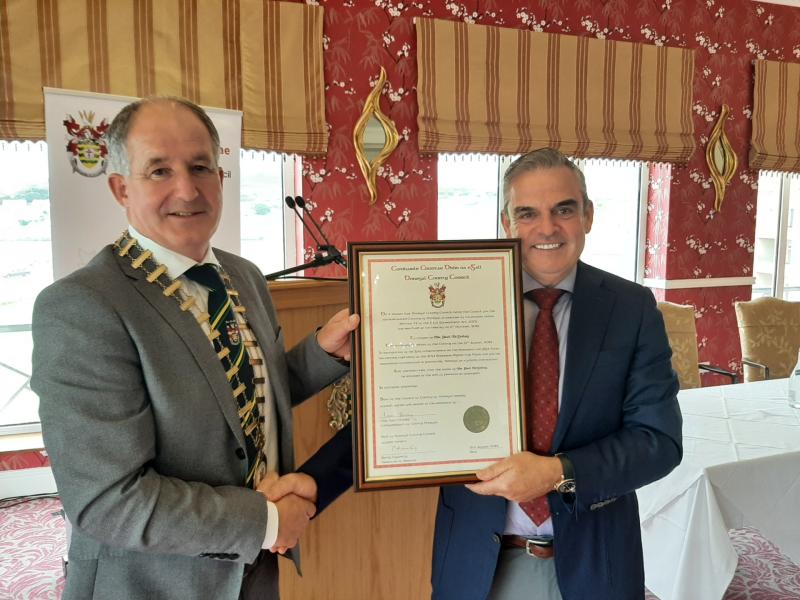 Former European Ryder Cup captain and golfing legend Paul McGinley said that he was “very humbled” to have been granted the Freedom of Donegal by Donegal County Council today.

This is the highest honour that the local authority can bestow upon an individual.

Speaking at the civic reception to mark the occasion, which was held in the Rosapenna Hotel in Downings, the hugely popular golfer spoke about his love for Donegal, and the potential it has in terms of golf tourism.

In his acceptance speech, he said that while he was used to doing television work and speaking to large audiences this was a “daunting” occasion in front of his own people and family, and something that he was “nervous about.”

“This means a lot to me,” he said, as he recalled how his family had moved from Donegal to Dublin years ago with five children.

Over the years there has been some debate about whether he considers himself a Dub or a Donegal man.

But, he pointed out, this reception and honour - as well as the fact that he was wearing a Donegal jersey at the Ulster Final - shows where his allegiances are.

“My side of the fence is Donegal,” he said.

He spoke of his great affinity to the county, and his belief that it offers so much.

He urged people from Donegal to “shout out about what Donegal has to offer”.

In particular, he expressed his belief that there is considerable potential to expand the golfing product in the north-west, just as they have done in some counties down south.

“Let’s shine the spotlight a bit up the coast,” he said, noting that there is a “phenomenal product” in Donegal.

Indeed, such is his confidence, he described with the following comment: “If Donegal was a stock I would be buying it.”

He also stressed the importance of improving the infrastructure.

Last October, Donegal County Councillors voted unanimously to bestow the Freedom of Donegal honour on McGinley in recognition of his contribution to promoting Donegal, and especially the county as a golfing destination.

Cllr Ciaran Brogan proposed that McGinley receive the Freedom of the County.

McGinley’s mother is Julia Sheridan, from Rathmullan and his father is Mick McGinley, from Dunfanaghy, who was a former Donegal Gaelic footballer.

Paul McGinley was a key figure in promoting the Irish Open in Ballyliffin in 2018 and this week the Rosapenna Hotel is hosting the Legends Tour.

McGinley is the tenth recipient of the Freedom of Donegal honour.

Several speakers paid tribute to McGinley and a short video was shown charting his career.

In his opening address, Cathaoirleach, Cllr. Liam Blaney said “Paul McGinley is not only known for his sporting success but his continued support for the development of the golfing sector in Donegal.  He stated that Paul is “known for his love of the county and its golf courses.  He is also known as the man who has made good on the global arena but has never forgotten his family roots.”

In his speech he also acknowledged that “Paul spent many a day in Rosapenna in his youth, caddying for his father and learning the trials and tribulations associated with the game of golf.  It therefore seems very apt, that he is here today at that same golf course to now receive this tremendous accolade as an acknowledgement of his work to support the golf sector in the county.”

The Chief Executive of Donegal County Council, Mr. John McLaughlin congratulated Paul on receiving the honour. He stated that “Donegal is fortunate to have many great ambassadors, and Paul McGinley is one of them, demonstrating a huge passion for the county and stated that he was one of the driving forces in bringing the Irish Open to Donegal in 2018 and has used his international profile to promote the golf experience in the county. “

He finished his address by wishing Paul and his family and friends continued success and a wonderful evening.

Representatives from political groupings also paid tribute to Paul McGinley on his outstanding golfing achievements and his continuous promotion of Donegal as a first class golfing destination.

He concluded the afternoon's proceedings by thanking all in attendance and left the podium to a standing ovation.

Paul is the 10th recipient of a badge and pin specially commissioned by the council and which is reserved exclusively for those on whom the Freedom of the County is conferred.

The badge, crafted by Ms. Geralding Hannigan, Designer Goldsmith, Letterkenny and mounted on a background is a silver replication of the County Badge granted to the Council by the Chief Herald of Ireland as part of a Grant of Arms to the County.  The badge comprises the O’Donnell Cross enfiled by an Iunula.  The Iunula on which it is based was discovered at Trentagh, Co. Donegal, and dates to the period 1500-2,000 B.C.  It is on display in the National Museum