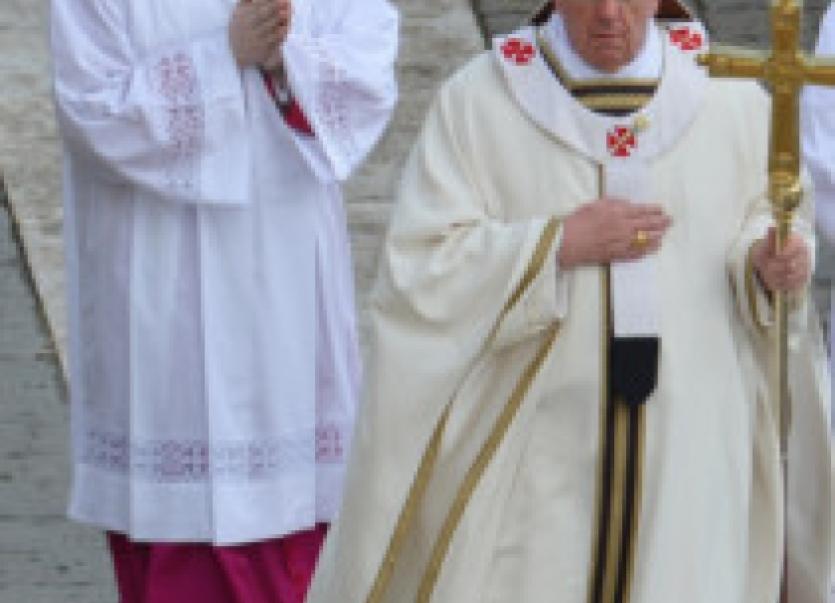 The Gaoth Dobhair-born priest, who is in his fifth year with the Congregation for Clergy in the Vatican, is a papal Master of Ceremonies, which involves ensuring the smooth running of the pope’s liturgical celebrations.

Father Gillespie’s sister Sorcha and her husband, James McGarvey, of Stranacorkra, Derrybeg; and Sorcha’s cousin Rosaleen McBride of Coitín, Derrybeg, were in Rome for Holy Week. They have visited Father Gillespie every spring since he was posted to Rome, but this was their first time there for Easter services.

The family attended Holy Thursday services at the Irish College, where Father Gillespie concelebrated, and the Holy Friday service, Easter Vigil and Easter Sunday mass at St. Peter’s Basilica. Their tickets to the liturgical celebrations enabled them to sit quite close to the altar.

“It was amazing to be beside the altar at St. Peter’s on Easter Sunday,” Sorcha said.

“It was incredible.” In the same way, they found themselves quite close to Pope Benedict XVI when they were in Rome for the Christmas Eve vigil in 2012. Sorcha said that was also an amazing experience.

Sorcha is the oldest of the six Gillespie children; Kevin is the youngest. Sorcha was proud to see her brother assisting the pope.

“It meant a lot to me. I was very moved by it, to be honest with you,” she said. “It’s a great honour for Kevin, really. I’m very proud of him.”

Ordained in 1999, Father Gillespie was first posted to Fintown and about five years later to St. Eunan’s Cathedral in Letterkenny before he was posted to Rome.

Father Gillespie, who is studying in Rome for his doctorate, also led the procession of cardinals into the conclave that elected Pope Francis.

“He’s a very nice guy,” Sorcha said of her brother. “And he’s very well able to apply himself to anything.”

Watch: History is made as Donegal club records first ever league win at the Brandywell, see the winning goal