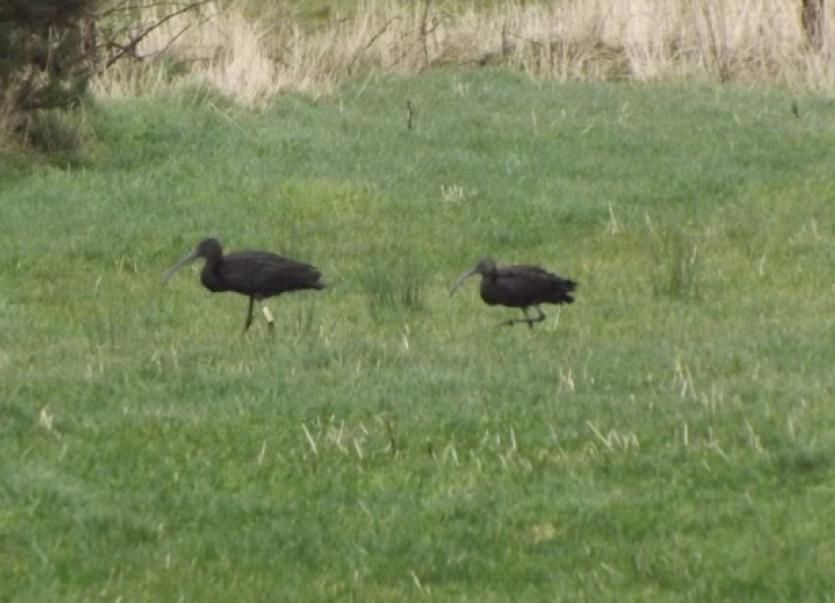 While the storms that battered the Donegal coast are not a rare sight in the depths of winter, some feathered visitors to our shores, believed to have been blown off course, certainly were.

While the storms that battered the Donegal coast are not a rare sight in the depths of winter, some feathered visitors to our shores, believed to have been blown off course, certainly were.

Over the Christmas holidays an eagle-eyed father and son duo from Marble Hill, near Dunfanaghy, spotted a the very rare sight of two “Glossy Ibis” birds as they travelled along the road.

Malcom Parke and his son Ian captured images when they spotted the striking birds taking shelter in fields near Dunfanaghy golf course and the local soccer field.

As they observed the birds they soon came to the conclusion they were not the more familiar sight of the Curlew.

They showed their images to some bird experts in Donegal, as well as the leg tag numbers of “05PA”, and this has helped identified them.

Ian explained that Malcom was quick to realise these were indeed a rare sight in Ireland at this time of the year. They are believed to have originated from France or Spain.

Ian explains: “He knew they weren’t Curlews but were similar in shape, beaks etc. He spotted them first on the 18th of December and we kept an eye on them for the following few days. One is still about but the smaller one is not about anymore. One was also found dead on Tory before Christmas so I’m told.

“We got in touch with Martin Malloney in Inishowen who used to do the birds of prey shows up in Glenveagh. He e was very helpful and passed the sighting and the leg tag number onto a guy called Ken Perry who records rare bird sightings. You can see the tag number clearly in one of the pictures and we were hopeful it could be tracked down. He reckoned it was possibly Spain or France but nothing concrete as yet. The two guys were very excited as this is apparently really rare to see them in Ireland, never mind in Dunfanaghy” he said