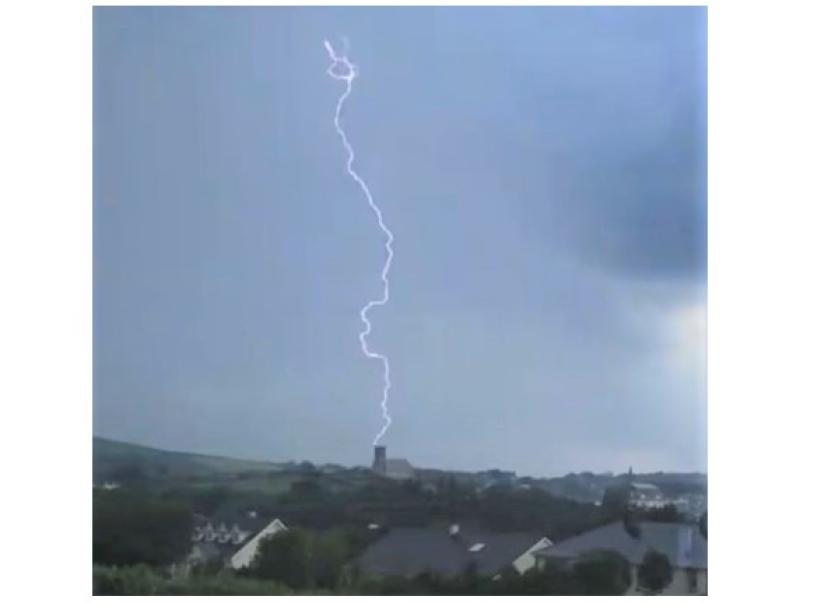 It’s the type of image that photographers dream of capturing - the moment when lightning strikes a church spire.

And Ballyshannon woman Aoife Dolan certainly captured the photo of a lifetime as lightning struck St Anne’s Church in the Erneside town.

Fortunately the church was undamaged thanks to the effectiveness of a lightning rod.

Much of Donegal experienced thunder and lightning throughout Sunday. As evening settled in, Ms Dolan in the Moy Road area of Ballyshannon tried to capture the dramatic lightning on video.

After a few hours and Ms Dolan went inside, put the phone on the windowsill and pressed record.

“After about 10 minutes I noticed a good strike of lightning,” she said. “I thought, ‘I’m bound to get that.’

“I realised then that it was very close to the church. It looks like it hit twice.”

There has been a huge reaction to the video and to a screen grab image showing the moment when lightning struck the church spire.

“I was very happy to capture it but I didn’t think it was such a big deal at the time,” said Ms Dolan. “I couldn’t believe the amount of reaction to it. I was chuffed.”

There was much relief among the community that the historic church seems to be undamaged.

This building is of major significance in the town of Ballyshannon and is the burial place of poet William Allingham.

According to the National Inventory of Architectural Heritage (NIAH), St Anne’s Church is a freestanding five-bay Church of Ireland church, built 1735 or 1745 and extensively rebuilt 1839 - 42. Repairs were carried out in 1899 and the further alterations were made around 1903.

It hosts a number of interesting stone features, with windows and doors also of historical interest.

According to the NIAH: “This fine Church of Ireland church is located in an elevated position overlooking Ballyshannon and it dominates the skyline of the town.

“It retains its early architectural character and form, and it is an unusually large example of its type and date. Its visual expression is enhanced by the extensive cut stone detailing, particularly to the openings and by the crisp, if rather austere, ashlar pilaster panels to the side elevations of the nave. The round-headed window openings lend this building a subdued Romanesque/Neo-Norman character to the exterior.

“This building is clearly of two distinct periods of construction with the plain mid-eighteenth-century bell tower contrasting with the more richly-detailed nave and chancel, which were/was added/rebuilt between 1839-42. Lewis (1837) records that the 'church was erected in 1745, on an eminence near the town, and is the principal landmark for vessels entering the harbour'.

“However, other sources suggest that the church was built in 1735 (Begley 2009). The later mid-nineteenth century works were carried out to designs by William Hagerty, an architect from Derry who worked extensively in for the Ecclesiastical Commissioners during the late 1830s (IAA; plans in RCB Library).”