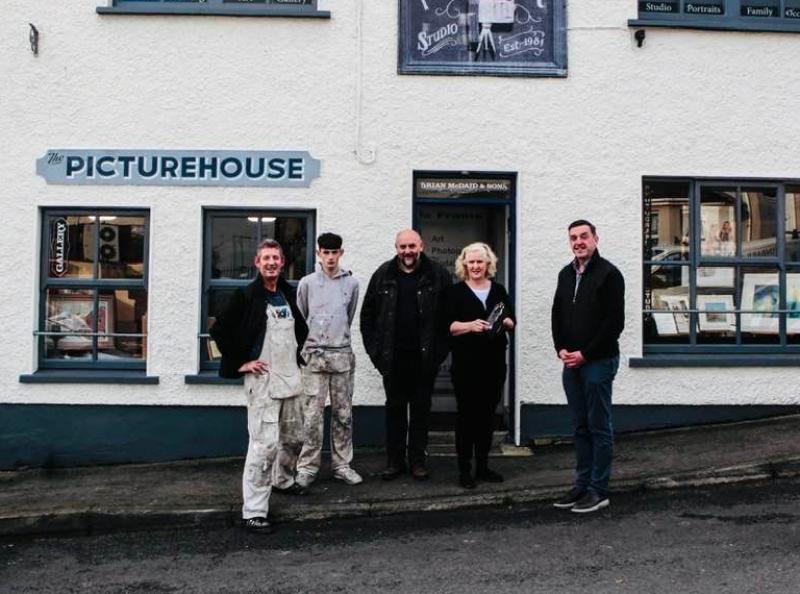 From left to right: Painter and decorator Finbarr Orr, his son Adam, Brian and Eileen McDaid of the Picture House studio and Brian McCormack of Letterkenny Tidy Towns

A Letterkenny business which is being run by the third generation of the same family has received an award for best shop front after it received a summer makeover.

The Picture House studio on Convent Road, which is run by well-known photographer Brian McDaid and his wife Eileen, picked up the prize for best shop front from Letterkenny Tidy Towns.

The premises was used for a drapery business by Brian’s grandfather and his mother later used it for her dressmaking business. It was his late grandparents’ home before he turned it into a photographic studio and gallery.

He said he was “over the moon” about picking up the award.

A roof-to-street makeover by local painter  Finbarr Orr, as well as the addition of flower baskets supplied by Letterkenny Tidy Towns, helped the shop front take the prize, Brian said.

He said it was great to see recognition for a business in “the foot of the town”.

“You never think you are going to win but over the summer it looked well with the hanging baskets. It makes a difference, it just gives it a great look. It’s an old business and it is just great that it is still there.”