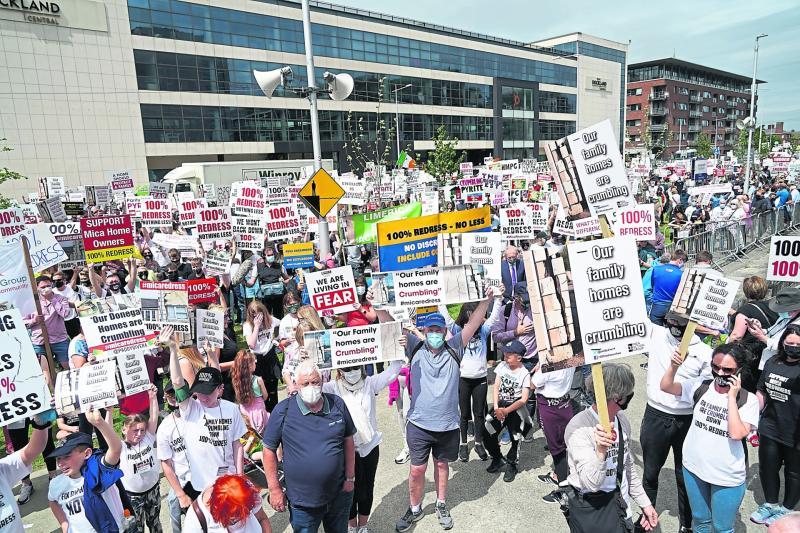 The Mica Action Group is threatening to prompt a no-confidence vote in the Government and escalate protests to bring Dublin and the government “to a stand-still” over a new proposed defective blocks scheme.

The group has said it will reject out of hand the new redress scheme after details of it were leaked over the weekend.

The proposed scheme is due to be brought before the Cabinet on Tuesday with reports stating it will have a cap of €420,000 per house, up from €275,000 in the existing scheme. The scheme is expected to cost €2.2b.

Mica Action Group (Mag) PRO Michael Doherty says the scheme is capped at €138 per square foot, short of the €150 required, and will exclude thousands of homeowners.

He said the scheme will lead to 3,000 to 4,000 “displaced families”  who would not be eligible for the proposed scheme which will create “a ghetto of mobile homes”.

Campaigners have raised concern over the cap per square foot which they say will leave many homeowners facing substantial costs. They are also unhappy at the exclusion of some rental homes and holiday homes.

Mr Doherty said Mag will be calling on homeowners to boycott the proposed scheme and will be looking to put together Dáil support for a vote of no confidence in the Government.

He said the situation had moved “to a different level” following the leaking of details of the new scheme which he described as “kite-flying”.

Describing the scheme “as a complete shambles” and “a betrayal”, he said: “We will be, as we have been in the background in case a plan B is required, looking at pulling together enough support for a vote of no confidence in the Government.”

Mr Doherty said the group has been in contact with five “disaffected” Fianna Fáil TDs who would be prepared to vote against the Government over the mica issue.

Mag will also be looking to escalate protests “to bring Dublin to a standstill over Christmas” which would involve support from groups including farmers, fishing and HSE staff, he said.

“There are very few sections of our society that are happy at the minute,” he said. “We have enough people to pull Dublin to a stand-still, not for a day or two, but for a sustained period.”

“The reality is we wanted none of this, no more than we wanted our crumbling homes, but our backs are completely against the wall,” he said.

READ MORE: Mica redress scheme could be capped at €420,000 per home