Tragic father and son were ‘always together’, funeral Mass hears 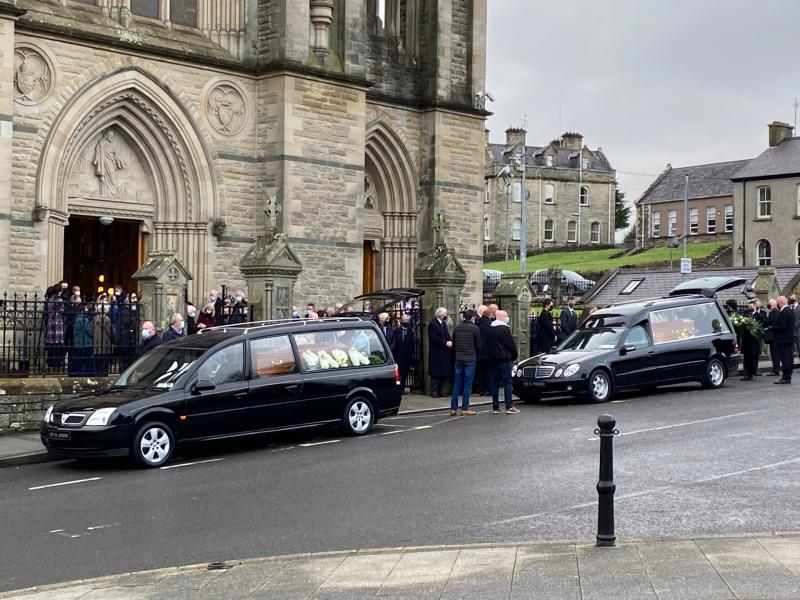 The father and son who died in a suspected murder-suicide in Letterkenny were inseparable, mourners at their funeral Mass heard.

Daniel Duffy (88) and his son Damien (50) were found dead at the home they shared at Windyhall, Letterkenny.

They were buried together in St Mary’s Cemetery, Ramelton on Monday afternoon.

“They were always together, from Damien’s childhood right up to their untimely and unimagined end,” Mgr Kevin Gillespie told Monday’s Funeral Mass at St Eunan’s Cathedral.

“Daniel and Damien did everything together. They were, lifelong, a great team and it makes what has happened all the harder to understand or to accept.”

The bodies of the father and son were found at around 2pm on Thursday. The body of Daniel Duffy was found inside the house while the body of Damien Duffy was located in a car parked at the property.

Officers believe that Damien smothered his father with a pillow before being poisoned with carbon monoxide in his car.

Daniel Duffy had worked from the age of 15 until his retirement at 65 with the ESB and had been one of those who helped install electricity on Arranmore Island.

“His tremendous wit and neighbourliness drew people to him,” Mgr Gillespie said.

“Dan Duffy was so much loved as a father, as a friend and as a neighbour. He loved people and he loved company. Time and again, it was said if you called to Duffys for a brief visit, you always stayed longer than intended. Even if you refused the tea, it was placed before you anyway. You would enjoy his storytelling with that great wit.

“His heart was open, full of joy, with tremendous generosity.

“His great intelligence and his great practical and electrical know-how meant that he was the first port of call for repairs and conundrums of any kind, It was a quality shared by Damien and Dan took great pride in Damien’s ability.”

Mgr Gillespie quoted from the Gerard Manley Hopkins poem ‘No worst, there is none. Pitched past pitch of grief’: “Comforter, where, where is your comforting? Mary, mother of us, where is your relief?”

He said: “It is hard to be sure if our anchor is firm enough for these heavy seas. We may feel that we shall be carried away by an unknown currant of despair or grief.”

He said: “Caught as we are between waves of conflicting emotions. Love, caught in turns by disbelief, no doubt at times by anger and by bewilderment.

“If the waves of grief can talk to us about bewilderment, we can but stand back and wonder at the ‘cliffs of fall, frightful, sheer, no-man-fathomed’ that took hold of Damien.

"In the midst of many emotions, we will have resiling from the questions of responsibility or from truth. We need a great deal of humility before forces that can take hold of even a loving son, a friend and neighbour.”

Mgr Gillespie spoke how the family’s ‘deep Christian faith’ had allowed them to approach the tragedy ‘with equanimity, in a measured fashion, with deep respect and with courage and strength’.

“It has transformed the moment into on which, away from unwanted attention, has been lived with the light of love winning out over the instinct for justice,” Mgr Gillespie said.

Among the floral tributes at Monday’s funeral was one spelling out ‘Papa’ from Daniel Duffy’s grandchildren.

Gardaí are not seeking anyone in connection with the deaths.

Daniel Duffy had not been seen in the area in close-on a week and investigating officers are attempting to piece together a timeline of events.

The bodies were removed to Letterkenny University Hospital, where SallyAnne Collis, a State Pathologist carried out post-mortem examinations.

They were predeceased by wife and mother, Christine, daughter and sister Caroline (Callaghan) and brother Alan Graham. They are survived by daughters and sisters Ann-Marie Giles, Jacqueline McCready and their families.

The Mayor of the Letterkenny-Milford Municipal District, Councillor Jimmy Kavanagh, said the people of Letterkenny were ‘very, very shocked’ by the tragedy.

“It is an awful tragedy and the sadness is heightened by the fact that we’re in the Christmas season,”

Councillor Kavanagh said. “Everyone is in shock at this news. It’s very hard to take in and come to terms with.”