Fisherman may have been trapped in boat before drowning

Investigation finds fatigue may have been a factor in fatal incident 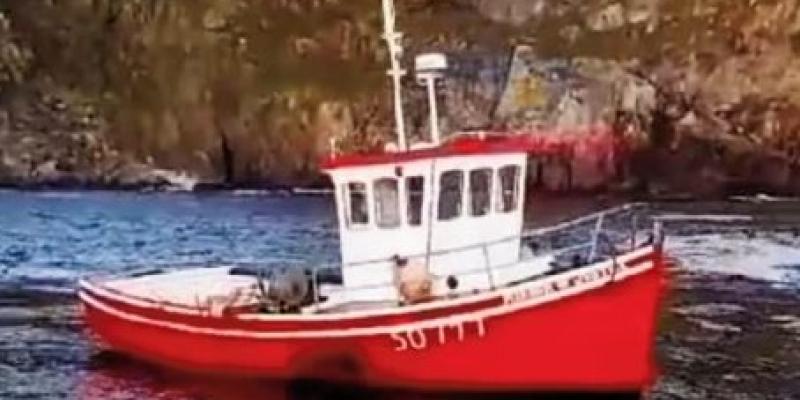 Mirror of Justice drifted onto rocks and broke up near Teelin Bay in August , 2020

The skipper of a Donegal fishing boat who drowned after it ran aground may have become ill or got trapped, an investigation has found.

James Byrne, who was in his 70s, died in an incident when his vessel Mirror of Justice drifted onto rocks and broke up near Teelin Bay on August 26, 2020.
Mr Byrne, of Cashel, Kilcar, was found in the water during an extensive search and rescue operation.

A report on the incident by the Marine Casualty Investigation Board (MCIB) found that the father of five may have become ill or got trapped shortly after stopping his vessel in an area he was known to fish at the end of the day. The investigation also concluded fatigue may have been a contributory factor in the incident.
The boat left Cladnageragh pier in Teelin Bay, at around 9.30am and was expected to return by 8.30pm.
Mr Byrne left a note for his wife to say he was going to a fishing area between Slieve League and Rathlin O’Birne.
The alarm was raised around 8.20pm when the skipper of another boat observed Mirror of Justice against rocks in an area behind Teelin Pier but could not see anyone on board.

Two onshore anglers at the back of Teelin Pier observed the boat drifting towards shore, but there did not appear to be anyone on board. They believed the boat made contact with the rocks at 8.15pm.
Killybegs Coast Guard, the Coast Guard rescue helicopter R118 and the Arranmore lifeboat were tasked to the scene. Several local vessels also arrived to assist.

The rescue helicopter lowered a winchman onto the boat which was awash with water that had caused the deck boards to start to float. The winchman could not see anyone on the deck, the wheelhouse or in the cabin, nor on the rocks or on the cliffs nearby.
After the boat broke up, a local vessel involved in the search found Mr Byrne’s body among debris about 110 metres from where it grounded.
The body was transferred by a Killybegs Coast Guard rib to Teelin pier. Mr Byrne was found wearing flotation type oil skin bottoms but no personal flotation device and was found with his mobile phone in his possession.

The report described Mr Byrne as a competent, capable and experienced skipper with extensive knowledge of his vessel and of the area. Mr Bryne would have been at sea for about ten hours when the incident occurred. The MCIB said that despite the time at sea being well within regulations, ten hours on a small vessel, alone and subjected to a constant Atlantic swell would cause fatigue in anyone of any age.
The report found it was unlikely that he fell overboard as if he had been in the water someone would have seen him. The MCIB concluded that Mr Byrne may have become ill or got trapped below the floorboards or in the forward compartment.
A postmortem found Mr Byrne died from drowning and that there was no evidence of serious injury or of any significant pre-existing natural disease to cause his death.
Toxicology reports found no evidence of drugs or alcohol.
The report noted that a key factor contributing to loss of life in the fishing sector is working alone and fatigue.
The MCIB recommended the Department of Transport should intensify efforts to promote maritime safety awareness.