Mona McSharry: Taking on the world with 'fun energy' 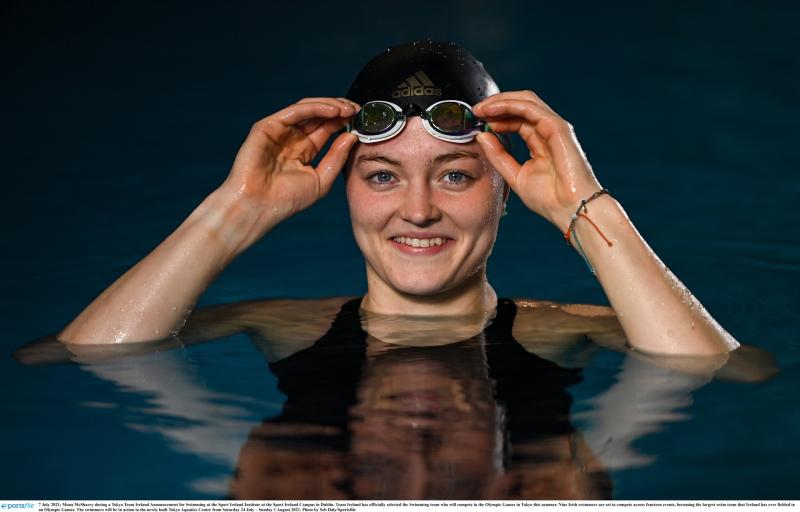 Mona McSharry won a bronze medal at the World Short Course Championships. In 2021, she competed in an Olympic final and holds 15 Irish records. Chris McNulty caught up with the Ballyshannon Marlins Swimming Club star . . .

Mona McSharry touched the wall and lifted her head from the water in search of a clue.

She glanced left and right, but the splashes drowned out the clarity.

McSharry inhaled, removed her goggles and, with a hand on the pool deck, glanced to the screen in the Emirates Arena.

The confirmation arrived: An Irish record of 1:03.92 saw her pip defending champion Alia Atkinson to the 100m breaststroke bronze medal at the World Short Course Championships.

Three days earlier, McSharry was just 0.04 seconds off a podium place in the 50m breaststroke.

“When you’re in the water, you don’t really know whats going on around you,” McSharry says.

“I had an inkling - you’ll see splashing from the corner of your eye or something - but for the most part you don’t know. Coming down towards the finish, I didn’t know until I touched the wall. Then, I turned and they were there too!”

McSharry had a real breakout year in 2021.

As she flips the calendar, the graduate of the Marlins Swimming Club in Ballyshannon is now among the world leaders in her pool and she now holds 15 Irish records.

Agonisingly close to a medal in the 50m breaststroke, when she was edged by Sophie Hansson of Sweden, McSharry channeled the hurt.

“I felt such frustration after the fourth-place finish,” she says.

“I do try and look at it in the sense that I was fourth in the world. Only the first three get medals so there was a little frustration.

“Fourth wasn’t much worse than third. It was a really good place and I was really happy with the swim. You always think what you could have done differently, but I swam the fastest I ever swam.

“After i came fourth in the 50m breaststroke, I was grumpy the next morning, mad. I carried that annoyance and worked hard through the stuff, trying to focus on it.

“You can overanalyse things in a race. I stay positive with it. I’ve had many races where things have gone wrong and you’ll never really do the perfect race. Even if the first 25m doesn’t go your way, you can’t throw in the towel and just work harder over the next 75m.

“I love having multiple races and not sitting about a hotel thinking about different things.” 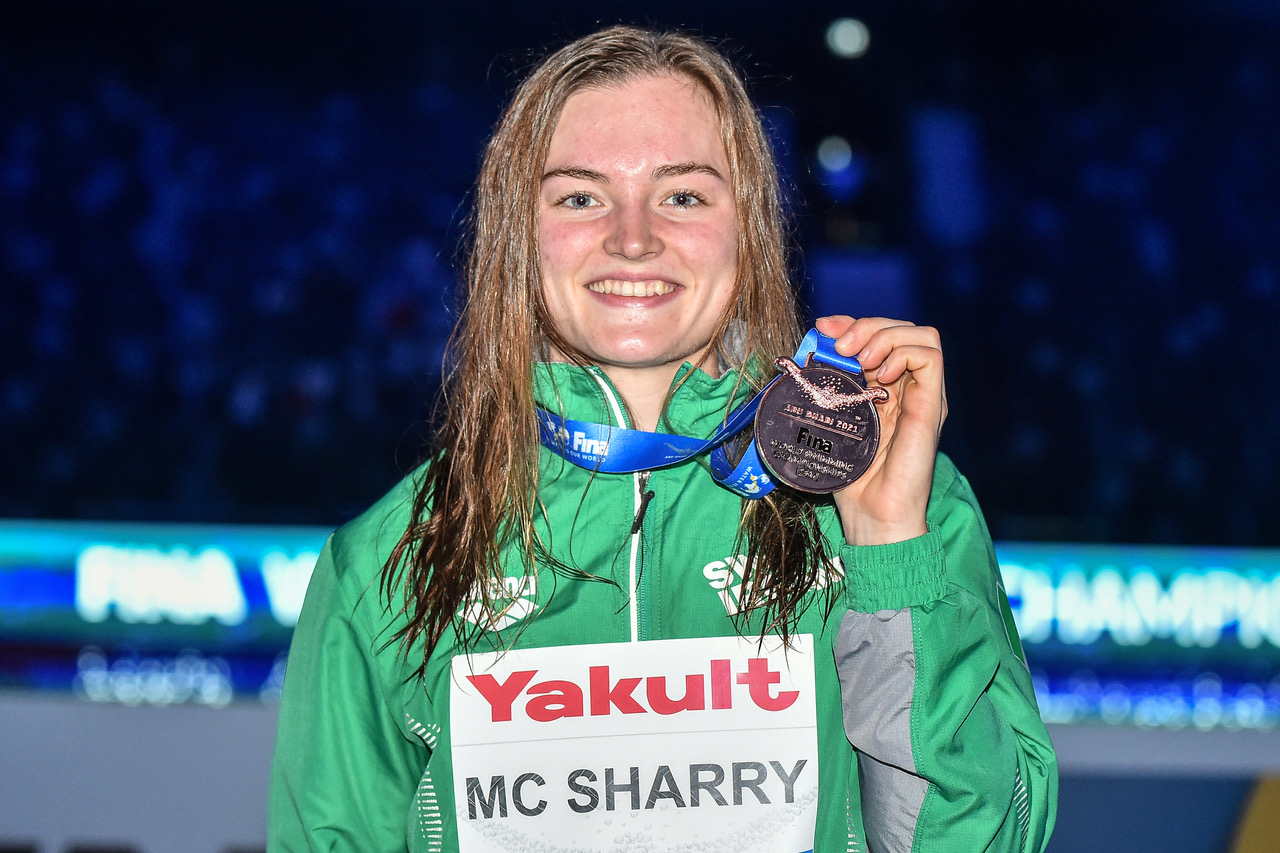 Winning bronze on the penultimate day didn’t alter her course as she brought the 200m breaststroke mark crashing down the following day.

She says: “It’s always hard when you win a medal and all you want to do is relax. The body will subconsciously shut down.

“The morning after the 100m breaststroke final, I almost felt done: ‘I’m finished now’. It was hard to reset again and get ready for the next race.

“I prefer being overly busy than having days off. It’s six days, but I do so much training all through the year.”

McSharry had already broken the mould in 2021.

In July, she became the first Irish swimmer in 25 years to make an Olympic final. In competing in the 100m breaststroke final in Tokyo, McSharry bridged a gap to Michelle Smith at the Atlanta Games in 1996.

McSharry wasn’t born when Michelle Smith won three golds (400m freestyle, 200m individual medley and 400m individual medley) and a bronze (200m butterfly) at the 1996 Olympic Games in Atlanta. Those medals, although still attached to Smith, are tainted by a tampered urine sample in the following years.

McSharry’s journey, still in its infancy, but the 21-year-old has laid down solid foundations for the Olympic cycle towards the 2024 Games in Paris.

The Grange woman has developed the ability to treat the big days under the bright lights just like any other arena.

Her pre-race routine remains the same, but McSharry has adapted her mental approach a little.

She says: “I’m so blessed to have had the ability to swim so well. It does come with mental struggles, but what really helped was leaning on the people there, team-mates and staff.

“Also, maybe not being as seriously focussed. I had a bit of fun, some dancing, interacting with people and connecting. They know how to get me out of my own head.

“When you walk out, the lights are blinding. I don’t take a lot in, I’m just focussed on the race at hand.

“My music (‘random, high-tempo stuff’) drowns out the noise, that can heighten the senses and make me jumpy. I have a set routine and I’m focussed. I listen to some music to get pumped. I try and be happy. Sometimes I can be a bit more serious and I look nervous.” 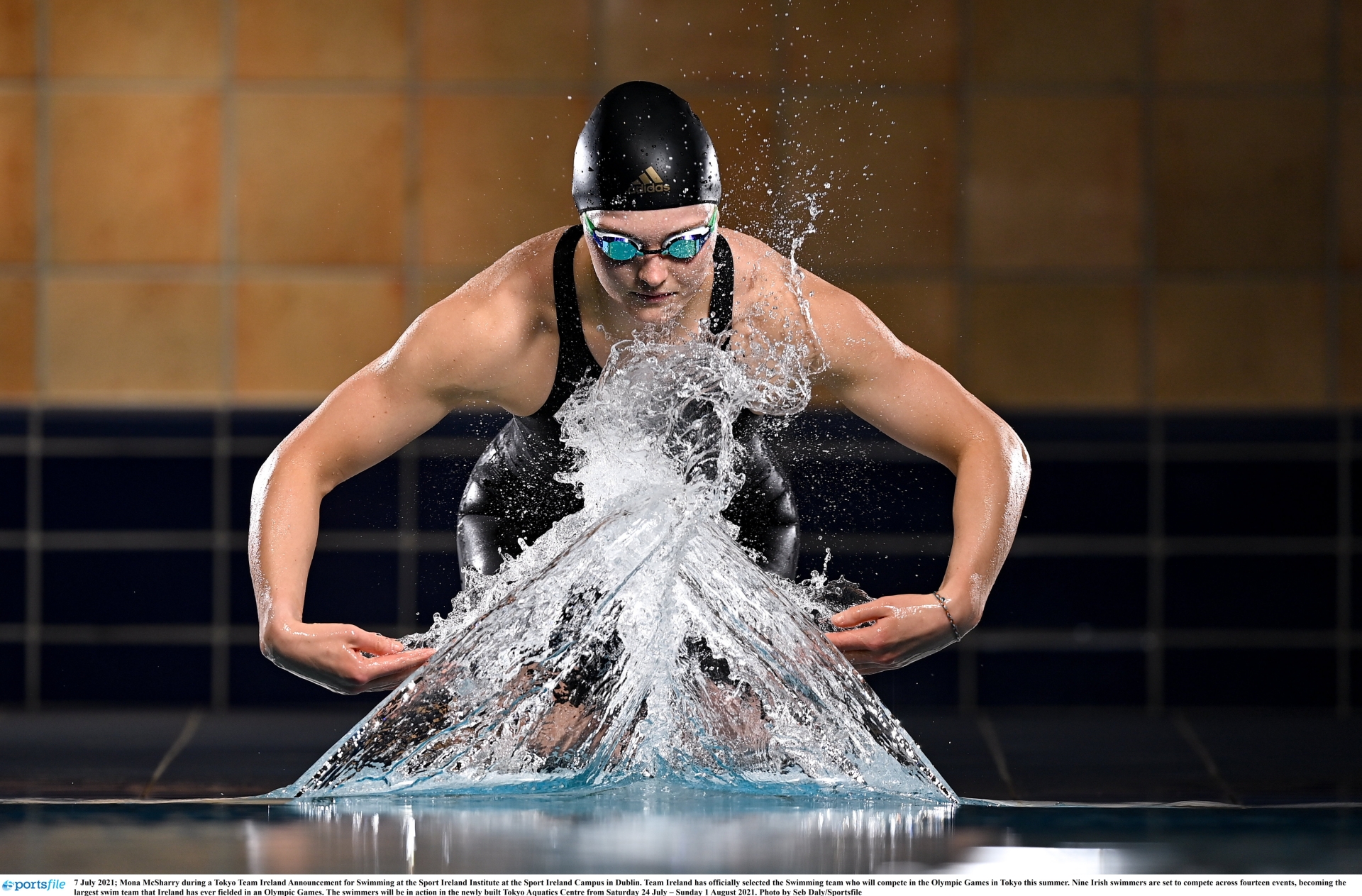 Some are defined by their chosen career. From an early age, Mona McSharry was the swimmer.

McSharry was the 100m breaststroke gold medalist at the 2017 World Junior Championships in Indianapolis. In  staving off Canadian Faith Knelson and America’s Zoe Bartel for gold in a then Irish record of 1:07.10, McSharry made the world take note.

Several American colleges also took heed. McSharry plumped for the University of Tennessee and in August 2020 she joined the Lady Vols.

The 2024 Olympics were the big target, but the 2020 Games, which were delayed to this year due to the Covid-19 pandemic, soon became possible.

Her star rose to new heights and the country tuned in as McSharry took to the water at the Tokyo Aquatics Centre.

“I only had a short time at home after the Olympics,” McSharry, the Olympic rings now tattooed on her left forearm, says.

“I was moving to a new apartment in Tennessee and was doing more training so I was sort of thrown back into that.

“It took my mind off that and having a come down, but I struggled towards the end of the semester. I struggled like it was more running out of steam. There was sort of a delayed effect for my Olympic come down.”

As she boarded the plan to Abu Dhabi this month, the goals were modest, even if the standards - and, by association, expectations - were as high as ever.

“It was two years since I competed in short course metres so I wasn’t sure where I was,” she says.

“I just tried not to think about times; just go and swim the race. I wanted to swim faster than my original times, but I kept the actual goals as open as possible.

“In Tennessee, we train a lot in short course yards so the principle is the same, just a little shorter. I was home for five days before I went to Abu Dhabi and training in the pool in Ballyshannon helped me to realign.”

McSharry returns to Tennesee next week. World and European Championships will soon appear on the horizon in 2022, but the team game in Knoxville gives a different - more enjoyable - perspective to her racing.

“Swimming is very individual,” says McSharry, who intends to swim pro in America when she completes a kinesiology degree in 2024.

“Tennessee has been amazing. It has been really great for me. It has had its challenges and it is hard being away from home all the time. It’s a challenge to fit in college work with the training, but I love to travel and experience different cultures and I love making so many more friends on the world stage.

Won silver in the 100m breaststroke at the South Eastern Conference Championships in Georgia, setting a new University Of Tennessee record of 57.82 seconds.

Dipped under 1:07 for the first time when going 1:06.97 the 100m breaststroke at the Swim Ireland Irish National Team Trials in the National Aquatic Centre to qualify for the Olympic Games. Took over a second off her 200m breaststroke record with a 2:25.92 effort at the same event.

Reached the final of the 100m breaststroke at the European Championshops in Hungary, finishing seventh. Set new national records with the 4x100m freestyle relay (3:44.37) and 4x100m medley relay (4:02.93) teams.

Won the 100m breaststroke bronze medal at the World Short Course Championships in Abu Dhabi. Reached three finals and set a total of eight new Irish record in the space of six days at the Emirates Arena.