Martin Griffin brings a crowd to its feet one last time 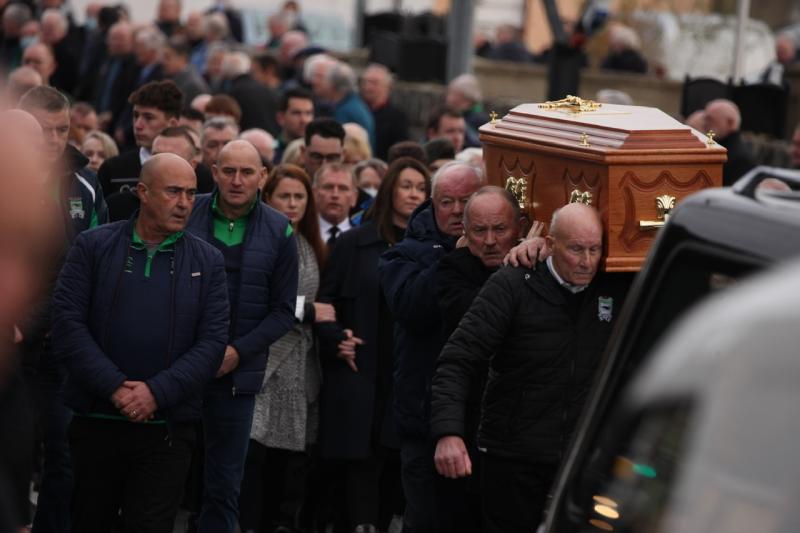 Even at his funeral, Martin Griffin’s imposing presence could be felt.

The Donegal football legend was laid to rest on Wednesday after his sudden death at the weekend.

Many former team-mates gathered for his funeral at the Church of Mary Immaculate, Stranorlar.

“I reflected on how he graced the pitch around the county and the country - he gave so many wonderful moments to MacCumhaills and Donegal supporters that have made him the legend that he is,” Fr McAteer.

“He would bring the crowd to their feet, catching the ball out of the sky, coming out carrying man, ball and all.”

Donegal manager Declan Bonner, who played alongside Griffin for Donegal, was among the mourners.

Fr McAteer said: “I could lipread that he was praying intensely and his prayer was: ‘Lord please let me unearth another Martin Griffin.’

“Martin touched something in all of us and it wasn’t just on his good days. Away from the roar of the crowd, he was a good natured, simple soul. The stories are endless and more often than not bring a smile and a laugh.”

A former employee with Donegal County Council, Griffin's passing has brought widespread sadness from those who knew him and those who saw him dominate the skies of Ulster football.

Brian McEniff brought Griffin into the Donegal minor squad in 1972 and the Bundoran man the full-back in high esteem.

Griffin was a senior championship winner with Sean MacCumhaills in 1977. Club members and former team-mates formed a guard of honour at Wednesday’s funeral.

Late of Silverwood, Donegal Road, Ballybofey, Martin Griffin was aged 67 when he died on Saturday.

He was predeceased by his father Gerry and his brother Noel.