Deele Harps clubman Martin Duffy was involved at administrative level in the Donegal League and was joint manager of the Donegal Schoolboys League 2007 team, which competed in the Kennedy Cup and Foyle Cup this summer 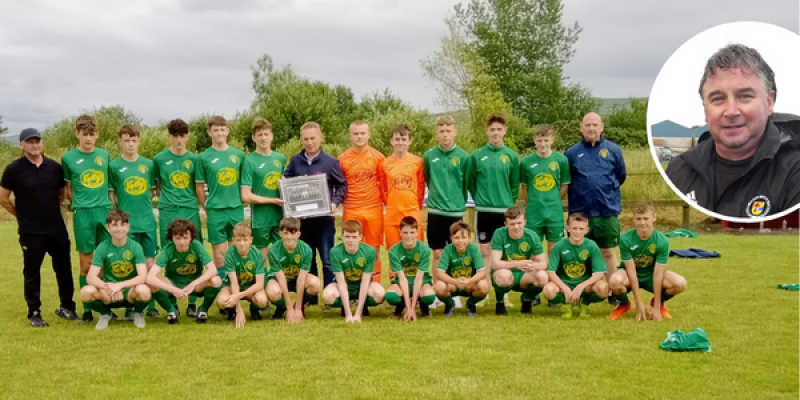 Tributes have poured in following the tragic death of Donegal football administrator and manager Martin Duffy.

Mr Duffy, who was in his late 50s, drowned while on a family holiday in Greece on Monday morning.

He was joint manager of the Donegal Schoolboys League 2007 team that competed in the Kennedy Cup and Foyle Cup tournaments recently.

A longstanding Deele Harps clubman, he was also the Lifford Area Rep on the executive committee of the Donegal Junior League.

“Martin was the level-headed one on our committee. When he spoke, people listened and he was someone you could turn to.

“He was an absolutely fantastic football man. Everything Martin did, he did it to the betterment of football and he was an active participant in the Donegal League at meetings ever since the formation of Deele Harps.

“I couldn’t speak highly enough of Martin as a person.”

Mr Duffy was to the fore in the recent redevelopment of the Diamond Park in Ballyare, working closely with Mr Ferry on the project.

A lecturer of plumbing at the North West Regional College, Mr Duffy was a native of Argary and lived in Coolatee, Lifford.

Raphoe man Eunan Brolly accompanied Mr Duffy to a coaching course in 1999 and the pair have been looking after teams every since.

“Martin was absolutely buzzing after this summer and was talking about the new trials we were going to have in a couple of weeks’ time.

“It’s such a tight shock. The young boys are absolutely devastated.”

PJ Cavanagh, the Chairperson of the Donegal Schoolboys League described the late Mr Duffy as someone who ‘put everything into preparing our players for the tasks ahead.’

“A strong personality who knew what was wanted and got it done.

“He will always be remembered in our prayers and thoughts.”

Martin Duffy is survived by his wife, Marie, sons Nikki and Jordan, daughter Jade, brother Paddy, sisters Anne, Mary and Josie and a wide circle of family and friends.

Funeral arrangements have yet to be announced.